Two gene injections reprogram Müller glia into rod photoreceptors in the retinas of blind mice and partially restore the animals’ vision, researchers report today (August 15) in Nature. With further development, the technique could lead to treatments for conditions such as retinitis pigmentosa, in which rods degenerate.

“The biggest takeaway from this paper is that it is possible to reprogram Müller glia in mammalian retina and partially restore visual function,” study coauthor Bo Chen, an ophthalmologist and regenerative biologist at the Icahn School of Medicine at Mount Sinai in New York City, tells The Scientist.

Based on previous studies in fish and other animals, the results aren’t a surprise, notes Javier Francisco-Morcillo, a cell biologist at the University of Extremadura in Badajoz, Spain, who was not involved in the study. Studies like this, which demonstrate the capacity to use mammalian Müller glia as intrinsic stem cells for efficient retinal neuron regeneration, are “very important to replace the retinal neurons that are lost during neurodegenerative diseases or retinal injuries in humans,” he writes in an email to The Scientist.

In vertebrates, Müller glia cells are the most common type of non-neuronal cells found in the retina and provide structural and functional stability for photoreceptor rods and cones. In cold-blooded vertebrates, such as zebrafish, Müller glia act as retinal stem cells, multiplying after retinal injury and reprogramming themselves as photoreceptor cells to replace damaged ones. In mammals, however, Müller glia cells do not spontaneously reprogram themselves into stem cells and then photoreceptor cells to replace damaged ones after injury.

Based on the data in zebrafish and other nonmammalian species, researchers have been looking for the correct cocktail of gene products, including transcription factors, and other chemical compounds, such as histone deacetylase inhibitors, to coax Müller glia to revert to a stem-cell–like state and then differentiate into retinal cells in mammals. In past studies, Müller glia cells proliferated in injured mammalian retinas, but not many of them differentiated into retinal neurons, Chen says.

In the new study, he and his colleagues took a different approach, attempting to reprogram Müller glia cells into rod photoreceptors in the retinas of uninjured mice, both in wildtype mice and in two strains that serve as models of congenital blindness. The team developed a two-step technique, first injecting an adeno-associated virus with a gene that expresses β-catenin, a protein that helps the glia re-enter the cell cycle, into the retinas of the four-week-old mice. Two weeks later, the mice received a second injection of an adeno-associated virus with the genes that express the transcription factors Otx2, Crx, and Nrl—shown in past studies to aid in the development of rod photoreceptors.

Along with the gene therapy, Müller glia cells received the chemical tags EdU and BrdU to monitor cell division, and the results showed that most of the glia underwent one round of cell division after the gene transfer of Ctnnb1, which expresses the β-catenin protein. Inclusion of a rhodopsin-tdTomato tag that indicates differentiation into rods showed that after the second injection, when Müller glia divided, one daughter cell became a rod photoreceptor while the other remained a Müller glia cell. The new rods produced proteins characteristic of the light-sensing retinal cells.

To test if the newly formed rods detected light, the team examined mice lacking GNAT1, an essential component for phototransduction, that model congenital stationary night blindness in humans and mice with retinal cells expressing mutant GNAT2, which makes it harder for their cone cells to detect light. Recording light responses from retinal ganglion cells in the retinas of mutant mice that got the gene therapy showed that some of the cells responded, whereas none of the cells responded in mutant mice that did not receive the treatment. Chen’s team also detected light responses in the primary visual cortex of the brains of the treated mutant mice but not in the same brain region of untreated blind mice.

Sumiko Watanabe, a molecular and developmental biologist at Tokyo University who was also not involved in the study, calls the paper impressive and says in an email to The Scientist that it will have a great effect on the field. However, both she and Swaroop note that moving this type of gene therapy into the clinic to treat humans could take some time, as many more questions need to be answered about how the technique would work to replace injured photoreceptor rods.

Very few Müller glia exist in the retina, Swaroop notes, so if those glia only experience one cell division to make one rod photoreceptor, not many rod photoreceptors will be made, possibly not enough to reverse degeneration. Also, the study does not address whether Müller glia in injured retinas would differentiate into rod photoreceptors or remain as glia. “There are a lot of things still to test and tweak with this technique,” he says.

Chen says one of the first questions his team will address will be how well the congenitally blind mice see after treatment. “We know they see light, but we are not sure how well they see,” he explains. The team also plans to test whether the two-step gene transfer method works in the human retina, but dissected human retinal tissue is hard to obtain, Chen says, so those studies may be a bit more challenging. 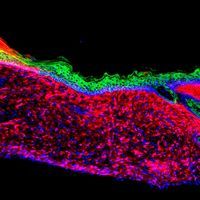