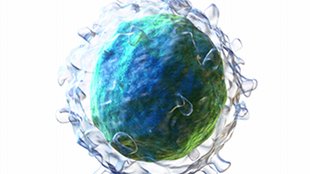 B cellWIKIMEDIA, BRUCEBLAUSRetroviral sequences in mammalian genomes are the remnants of old viral infections and, for the most part, their expression is suppressed. But a report published today (December 18) in Science suggests that, in B cells, a particular type of antigen can stimulate transcription of these viral relics, which in turn prompts cell proliferation and antibody production.

The work is a “tour de force,” said Michael Cancro, a professor of pathology and laboratory medicine at the University of Pennsylvania Perelman School of Medicine who was not involved in the study. “It may well be the seminal paper in resolving this long-standing conundrum of exactly what is a TI-2 antigen doing to get these B cells to kick off.”

TI-2 antigens are so named because they can stimulate B cells to produce antibodies in a T cell-independent (TI) manner. Unlike protein antigens—which need T helper cells to...

A team led by Nobel Laureate Bruce Beutler at the University of Texas Southwestern Medical Center screened a large number mutant mice—each with defects in different immunity-related genes—to see which, if any, failed to produce the expected antibodies in response to a known TI-2 antigen. The researchers found three: one with a defective cytoplasmic RNA-sensing pathway—caused by a mutation in the mitochondrial antiviral signaling protein (MAVS)—and two with defects in the cytoplasmic DNA sensing pathway—caused by mutations to cGMP-AMP synthase (cGAS) and stimulator of interferon gene (STING).

The requirement of these RNA and DNA sensing pathways, which detect and signal the presence of foreign nucleic acids, was a bit perplexing, said Beutler. “We asked ourselves, ‘Where is the DNA or RNA coming from?’ [After all], we’re not giving any nucleic acid to these mice.”

It turned out that TI-2 stimulated B cells to produce a wide range of endogenous retrovirus (ERV) RNA transcripts from across the genome. These transcripts were then also reverse-transcribed into DNA. Indeed, the team showed that treating the mice with drugs that inhibit reverse transciptase not only reduced ERV-derived DNA, but also the production of TI-2-induced antibodies.

If the mechanism holds true in humans, “then the millions of people that are infected with HIV and taking combination therapies with reverse transcriptase inhibitors might have problems,” pointed out Didier Trono, a professor of virology and genetics at the École Polytechnique Fédérale de Lausanne who was not involved in the work. “They might be unable to respond to fairly garden variety antigens,” he said—and thus could be susceptible to infections. However, added Beutler, reverse transcriptase inhibition did not entirely wipe out TI-2-induced antibody production in the mice because “you still do have the MAVS pathway.”

Although the findings indicate a role for ERV RNAs and DNAs in TI-2 signaling, a definitive experiment—blocking activation of all ERV transcription across the genome to see whether antibody production is affected—would be very difficult to perform, said Trono. “You’re not going to be able to inactivate 500,000 different sequences.”

Still, Trono said he thinks ERVs are likely involved. “The more we look at [ERVs], the more we realize that even though the bulk of them are repressed for good in early embryogenesis, a number of them remain expressed in a tissue-specific manner or are subjected to repression mechanisms that are labile,” he said.

How might this unexpected TI-2-to-ERV pathway have evolved? “Once retroviral elements become part of the genome then of course they are under positive selection for the benefit of the host,” explained Beutler. “It appears that [their expression] was taken advantage of, at least in the B cells . . . and has become an integrated part of the B cell receptor signaling mechanism.”

The MAVS and cGAS-STING nucleic acid detection pathways exist in many other cell types, Beutler added. It’s quite possible, therefore, that a variety of cells are putting one-time retroviral invaders to work for their own ends.