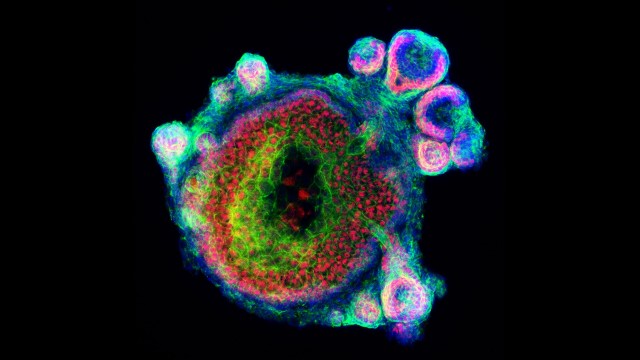 Researchers at Indiana University have developed the most realistic mouse skin tissue to be grown in a lab to date, according to a study published yesterday (January 2) in Cell Reports. The new mini-organs, or organoids, grow in 3-D culture and produce hair follicles, making them potential models for research into skin development, skin diseases, and hair growth.

To develop the organoids, the Indiana team cultured pluripotent stem cells from mouse skin. Unlike previous approaches, which have generally grown different layers of the skin separately and then combined them later, the researchers grew the stem cells in a specially developed 3-D medium, resulting in the simultaneous development of both the upper and lower layers of skin in a growing ball of cells suspended in culture.

“You can see the organoids with...

In the process of the research, the team discovered that the early development of this cyst was crucial to later hair follicle development—disrupting the initial organization of dermal cells blocked follicle growth, Koehler says in the press release. “We think that it’s very important that the cells develop together at an early stage to properly form skin and hair follicles.”

The researchers are now hoping to develop a similar model with human cells, which, Koehler says in the statement, “could be potentially a superior model for testing drugs, or looking at things like the development of skin cancers, within an environment that’s more representative of the in vivo microenvironment.”