ABOVE: Prototype of a SARS-CoV-2–detecting mask
WYSS INSTITUTE AT HARVARD UNIVERSITY

A face mask that both protects against respiratory pathogens and tests for SARS-CoV-2 as accurately as a lab test? It sounds like science fiction.

But in a study published June 28 in Nature Biotechnology, a group led by researchers at Harvard’s Wyss Institute and MIT incorporates biosensors into fabric, creating a SARS-CoV-2–sensing face mask and a jacket that can detect antibiotic-resistant bacteria.

As far as the authors know, it’s the first demonstration of textile fibers using cell-free systems “that have been engineered to harness the core sensing mechanisms of cellular biological systems,” says coauthor Luis Soenksen of MIT.

It’s not the first time researchers have incorporated biological components into wearable sensors. In a quest to make devices such as stick-on tattoos that sense small molecules on the skin or running gear that opens ventilating flaps when exposed to sweat, scientists have often used living cells such as bacteria because their molecular machinery can carry out a reaction that indicates the presence of a given substance.

But living cells can be needy, with strict nutritional, moisture, and temperature requirements. They also carry the risk of escaping into their environment, as well as mutating so they no longer carry out the role they were engineered for.

“It evokes the convenience of instant coffee,” says Wyss Institute synthetic biologist and coauthor Peter Nguyen. “You can store it for years. And whenever you feel like it, you just take it off the shelf, add water, and you have instant diagnostics.”

In the case of the wearables his team develops, Nguyen says an additional advantage of using freeze-dried components is that because they only activate when rehydrated, they could give quick feedback to the user if they come into contact with contaminated fluids. Prior to the pandemic, the team (which included Jim Collins, the cofounder of the diagnostic-developing startup Sherlock Biosciences) had been working on wearable fabrics with embedded sensors that the researchers envisioned being used for applications such as sensing biohazards or environmental chemicals and alerting the wearer by sending signals to a smartphone app. The idea of the wearables came from wanting to “integrate this into something that everybody on the planet can use at home without too much muss or fuss or expertise,” says Nguyen.

They showed they could freeze-dry and rehydrate many different types of sensing systems, including those that could detect various small molecules and RNA from Ebola virus. Soenksen says the team tested more than 100 fabrics to find which ones were most compatible with the sensors, and was able to integrate the sensors into a jacket that could detect certain strains of antibiotic-resistant bacteria. They were almost ready to submit the final revisions on their manuscript, and just needed to do a few more experiments.

Then the pandemic hit.

Unable to do the experiments they had originally planned, Nguyen remembers, “We were sitting at home thinking . . . Can we take what we’ve learned from the wearables and apply it to the pandemic?”

Initially, says Nguyen, they wanted to make a wearable sensor that could detect environmental SARS-CoV-2, but then realized it would be difficult to collect enough sample to activate the dehydrated sensor—unless an infected person happened to sneeze directly on it.

The idea for a mask came when some physician-scientists on their team who were treating COVID-19 patients mentioned how difficult it was to triage suspected patients when the existing diagnostic tests were so slow. Because people coming in with COVID-19 symptoms were immediately given masks, Nguyen explains, the team thought, Why not integrate a test into the mask?

The mask could also be useful for hospital staff, who could wear the mask all day and then run the test at the end of their shift, instead of having to step away from their work to be tested, Nguyen adds.

The team created a sensor that senses SARS-CoV-2 RNA in the user’s breath and that the researchers say can be integrated into any mask (in their study, they use a KN95). To activate the mask, the user simply presses a button to release a tiny amount of water into the mask’s self-contained sensing system to rehydrate the components of a three-step reaction. Any virus deposited on the mask’s sensor would be wicked through the system by capillary action, allowing each step to happen sequentially. First, a lysing step breaks open any viral particles to expose RNA. Then, a reverse transcriptase enzyme converts the single-stranded SARS-CoV-2 RNA into double-stranded DNA. Next, a recombinase enzyme opens up the DNA duplex and pairs primers with homologous regions in the DNA. A binding protein stabilizes the separated DNA strands, and a polymerase enzyme makes copies of the region between the primers.

Finally, the copies of viral DNA activate the SHERLOCK CRISPR Cas12a enzyme, which cuts up nearby nucleic acids, including a bit of single-stranded DNA that tethers a fluorescent indicator. The released indicator reacts with a strip in the mask, changing the pattern of lines on the strip (which can be oriented on the inside of the mask, for the user’s privacy)—much like a pregnancy test. All of the reactions were optimized to work at room temperature. 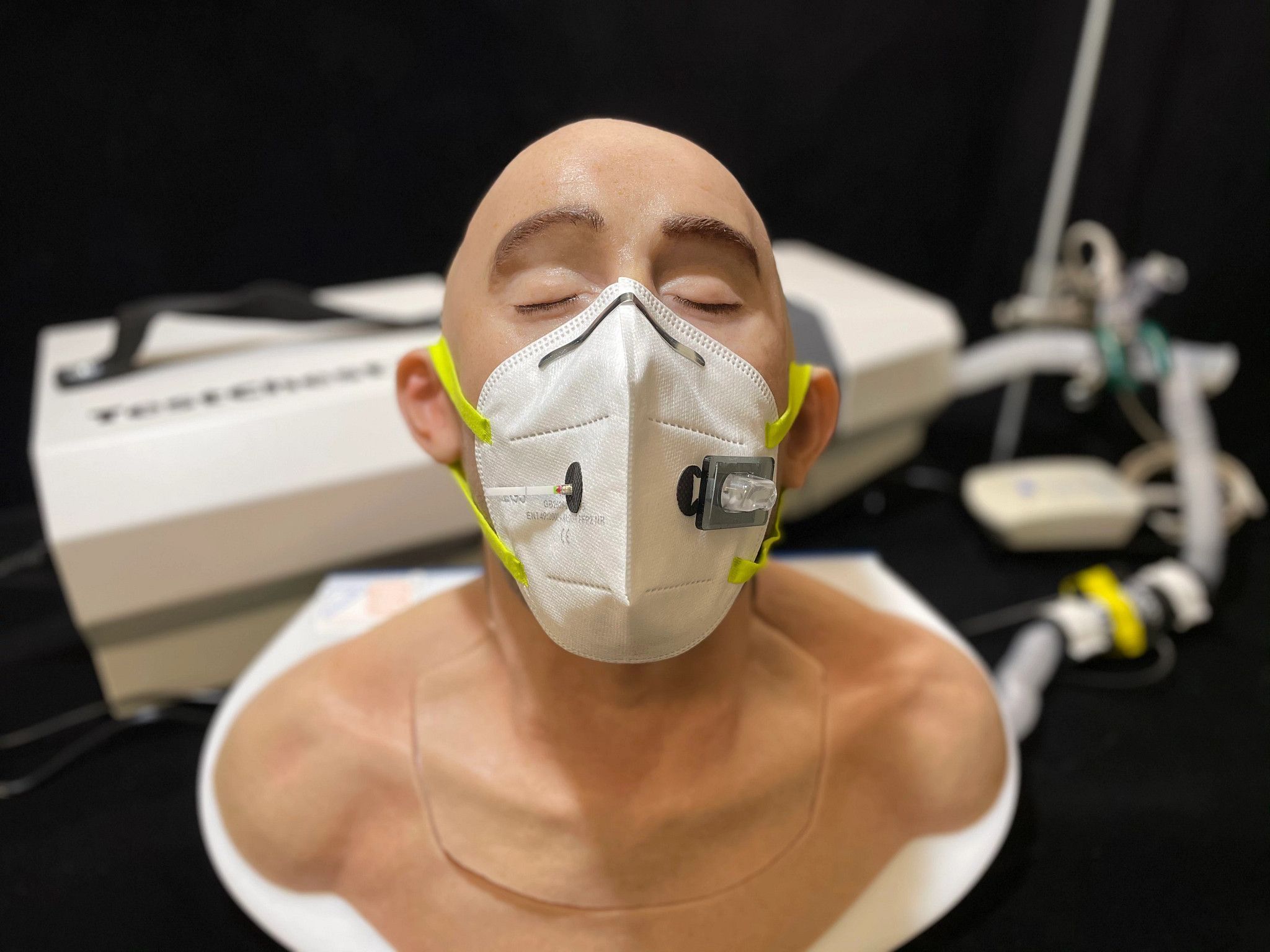 The authors tested the masks on a device they made by connecting an instrument that simulates lung activity to a model of a human airway shaped like an adult human head. By connecting nebulized SARS-CoV-2 RNA to their mask-wearing breathing apparatus, they confirmed that the mask could detect viral RNA breathed out by the wearer. According to the authors, the assay can detect the virus at the same low concentrations as the PCR tests currently used to diagnose SARS-CoV-2 infection, and the whole reaction takes less than two hours.

“I think it’s a really nice demonstration of cell-free biosensors,” says Henrike Niederholtmeyer, a synthetic biologist at the Max Planck Institute for Terrestrial Microbiology who was not involved in the study. “It’s cell-free, so you have less concerns about biocontainment,” she says. “If we were to wear these masks or run around with these wearable sensors, then nothing engineered could escape into our environment.”

The devices in the paper are still proof-of-concept at this stage, says University of Edinburgh synthetic biologist Baojun Wang, who also did not participate in the work. However, he thinks it’s a very good design compared to others using living cells. “This may give you more stable sensor design,” he says, “and may be one step closer to real situation use.”

But don’t line up for a virus-sensing mask just yet. In addition to still being a prototype and needing to be redesigned for manufacture, the virus-sensing mask needs to be tested on actual COVID-19 patients—something Nguyen says wasn’t possible when they were developing it because of safety concerns in hospitals—and would need approval from the US Food and Drug Administration (FDA).

Another limitation is that currently the sensors can only be used once, says Wang. He adds that the sensors in the paper also can’t measure changes in viral load over time (the way a fitness watch can measure fluctuations in heartbeat). “It only monitors yes or no—it either happened or not.” Soenksen says the team is thinking about ways to chemically reset and reuse the sensors.

Beyond potentially helping to monitor for infectious disease in the future, he and his colleagues envision that the wearables could be adapted to detect things such as nerve gas or bioweapon pathogens, and then deployed with first responders and military personnel.

Ultimately, the paper the researchers ended up publishing wasn’t the paper they had planned on originally, but like most labs across the world during the pandemic, they tried to make the best of their situation. “Even though nature threw us a curveball,” says Nguyen, “we actually caught it.”