Genomics researchers have unveiled a new set of reporting standards for the calculation of a person’s disease risk based on their genetic profile. Known as a polygenic risk score, this number attempts to quantify the contribution of multiple genetic variants to someone’s likelihood of developing conditions such as breast cancer or coronary heart disease. Generally speaking, a single mutation will have little effect on risk, but an agglomeration of mutations could boost the odds. The new standards aim to codify the way that researchers report their work about polygenic risk scores so that this work is comprehensible and usable by others.

“The framework that has been proposed here is coming from very reputable groups . . . who really have sat down and thought about how we define the terms of the field. This is what I find very exciting about it,” says Eimear Kenny, the director of the Institute for Genomic Health at the Mount Sinai School of Medicine. The work is a joint effort of the ClinGen Complex Diseases Working Group in the United States and administrators of the Polygenic Score Catalog in Europe, which are both efforts led by expert volunteers to catalog the link between genetic variation and disease risk.

The new standards were published in Nature on March 10. The authors report that there have been more than 900 publications about polygenic risk scores in the past decade, spurring their effort to codify best practices. Although the standards primarily aim to improve clarity in how researchers communicate with each other about polygenic risk scores, the long-term goal is to incorporate this knowledge into how doctors care for their patients.

“A lot of papers . . . didn’t really have the information that we needed to really understand the specifics and the nuances and the context of these scores,” says Genevieve Wojcik, a genetic epidemiologist at the Johns Hopkins Bloomberg School of Public Health and the paper’s corresponding author. “It was really impossible to know: is this a good score? A bad score? Who is it for?”

The seedbed of polygenic risk scores are genome-wide association studies, which aim to make connections between genetic variants and numerous human traits, from behavior to disease, among the studied population. This requires population-level samples, and to date such work has generally been conducted among people with roots in Europe.

The standards also ask researchers to provide sufficient information for others to reproduce their work. “There’s been a large move in the last few years towards transparency and reproducibility across pretty much all science,” says Wojcik.

A polygenic risk score is not a bullseye prediction of a person’s risk of developing disease, emphasizes epidemiologist Susan Neuhausen of the City of Hope Cancer Center in southern California, but rather one more element in a risk profile that could also include family history, environmental exposure to toxins, or factors such as a person’s blood sugar or cholesterol level. Given those caveats, Neuhausen, who studies genetic determinants of breast cancer in Latina women, says she believes that polygenic risk scores can be useful and that the new standards are helpful for advancing understanding among the scientific and medical communities of what a polygenic risk score means.

“There haven’t been enough details and standards to know that a lot of these polygenic risk scores are valid or not valid,” Neuhausen says.

Wojcik notes that these are non-binding reporting recommendations, but says that following them will enhance the utility of research about polygenic risk scores.

“Polygenic risk scores are not new things, but the excitement about them has taken off in the last three or four years,” says Kenny, who has collaborated with Wojcik but was not involved in the project. Kenny says the computational power to derive polygenic risk scores at scale has matured in recent years, making it more important than ever to have clear standards for how to report and understand the scores. She says that the conversation about polygenic risk scores has broadened well beyond geneticists to now include fields such as anthropology and computer science, making a shared understanding of terms essential.

One suggested data element in the new standards is the ancestry of study participants.  “It’s really clear that the vast majority of these [polygenic risk scores] have been developed in people of European ancestry,” Neuhausen says, noting that these scores lose their predictive value for people with the greatest genetic divergence from the source samples. The existing risk scores are reasonably effective for the Latinas she studies, Neuhausen says, but less effective in Asian groups and particularly poor in people of African ancestry. To address this, Kenny notes, the US National Human Genome Research Institute plans to fund a Polygenic Risk Score Diversity Consortium this year. 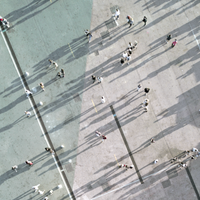