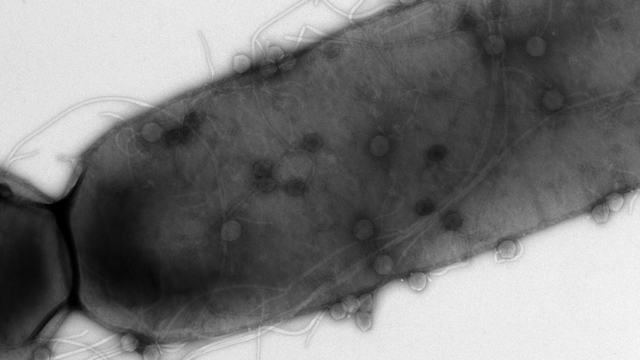 Bacteria have been defending themselves from phages—viruses that attack bacterial cells—for billions of years, and unlocking the immune mechanisms they use to protect themselves has led to the development of powerful molecular biology tools such as restriction enzymes and CRISPR-Cas9. Now, researchers report in Science today (January 25) that they have discovered 10 more immune systems that bacteria use to protect themselves against phages and plasmids, opening up the possibility to add new tools to the molecular biology toolbox.

“[The researchers] have more than doubled the systems that we knew of that are involved in phage defense,” says Lori Burrows, a professor of biochemistry at McMaster University, Ontario, who was not involved in the study. “It’s quite a feat of bioinformatics.”

Bacteria have many sophisticated lines of defense against phages, but it’s unknown how many are still awaiting discovery. Rotem Sorek...

Of the 26 antiphage systems they tested, nine turned out to be involved in antiphage immunity and one in antiplasmid defense. Sorek’s team named each family after a mythological protective deity, such as Druantia, a Gallic archetype of the eternal mother, and Kiwa, a divine guardian of the ocean in Maori traditions.

Although the other 16 systems didn’t ward off pathogens during the assay, it’s still possible they may be valid defense systems, says Sorek. “It is possible that these systems need something that is encoded in the genome of origin that is lacking in the model organism,” he tells The Scientist. “Another possibility is that the promoters of the systems or other elements are not functioning correctly in the receiving organism.”

For the most part, Sorek and his colleagues have not yet uncovered the mechanisms by which these systems protect bacteria from phages, although they found clues to how some of them work. The “Theoris” system, named for the Egyptian protective deity of childbirth and fertility, contains a Toll-Interleukin Receptor (TIR) domain, which mediates protein interactions in intracellular signaling and was previously identified as being associated with prokaryotic Argonaute genes involved in RNA interference (RNAi).

In the “Zorya” system, named for a Slavic deity, Sorek’s group discovered that the mechanism of immunity contains components of a proton channel that is also used in the motors of bacterial flagella. “We have some initial evidence that the proton channel may be used to kill itself—to depolarize the membrane once the bacteria has become infected,” killing the bacterial cell, says Sorek. “We believe that additional studies will reveal more about [these] mechanisms.”

The researchers believe that once the mechanisms of action are better understood, facets of the immune systems may be adopted as molecular biology tools. For instance, the discoveries of restriction enzymes and, later, CRISPR-Cas9—both of which were adapted from bacterial immune systems—revolutionized molecular biology.

“Whenever a complex immune system is discovered and its mechanism is eventually understood, it can become a very effective tool,” says Sorek. Immune systems must be highly selective in identifying specific molecules in order to function well, he says. “In molecular biology, this is exactly what we need.”

“[The study is] very cool from a scientific standpoint, but you immediately realize that there’s a legitimate impact,” says Rodolphe Barrangou, a CRISPR researcher at North Carolina State University who was not involved in the study. “It’s obvious that as people characterize those systems and unravel the biology behind the mechanism of action, there’s huge potential to turn some of those into technological powerhouses and the next generation of molecular tools derived from host-phage interactions.”

The more alternatives that are available to CRISPR, the better, says Burrows. Furthering our understanding of bacterial defenses could have wider applications as well. “The more we understand about these types of systems, the more we can think of ways to get around them in terms of using phages for therapies against antibiotic-resistant organisms,” she says.

Sorek and his colleagues plan to dig deeper into the mechanisms of the newly discovered genes, while also actively pursuing searches for additional immune systems. They’ll also try to discover how phages strike back, he says. “Some phages can overcome these defenses and we want to know how.”