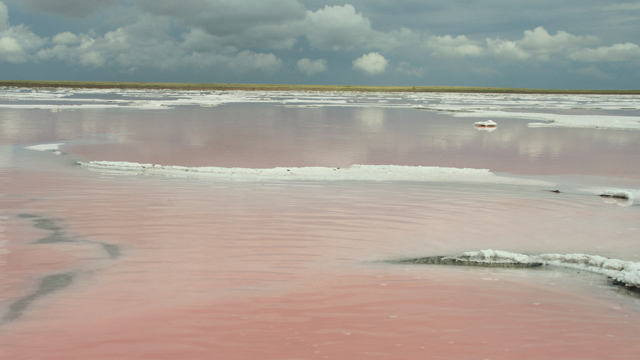 A hypersaline salt lake in southeastern Siberia with halite crystal deposition; the red color is due to a high density of haloarchaea in the brines.DIMITRY SOROKINMany strains of archaea are capable of living in environments with high salt concentrations, and others are able to produce methane, but only a few can do both. In a study published today (May 26) in Nature Microbiology, researchers identified and cultured two lineages of methane-generating archaea that thrive in salty lakes. The two strains—part of a class the authors named “Methanonatronarchaeia”—appear to be most closely related to the Halobacteria, a class of archaea found in salt-rich environments worldwide.

“The halophilic archaea had long been suspected to have evolved from a lineage of methanogens, and this new lineage is the missing link confirming this hypothesis,” William Whitman, a microbiologist at the University of Georgia who did not participate in the...

Dimitry Sorokin, a microbial ecologist at the Russian Academy of Sciences in Moscow, and his colleagues showed previously that the sediment in soda lakes in southern Siberia contained DNA with two different versions of a gene unique to methanogens, but that were only distantly related to the same gene in known microbes. In order to find the organisms the genes belonged to, the researchers isolated 11 strains of archaea from highly alkaline and salty soda lakes, and three from non-alkaline salt lakes.

To culture the strains successfully, the team grew them at high salt concentrations and temperatures and added a form of iron sulfide, a mineral that is found in the sediments where these microbes grow.

The researchers observed the production of methane in the cultures only when they provided both formate and methanol or trimethylamine, two substrate combinations used in the methyl-reducing pathway of methanogenesis. They concluded that the two archaeal lineages likely use this pathway instead of three alternative methanogenesis pathways commonly used by other archaea.

The authors compared representative genomes of the two lineages to each other, as well as to the genomes of other archaea. These comparisons suggested that the common ancestor of archaea was a methane-producer, a hypothesis that others have explored as well. They also found genomic evidence that this class of archaea copes with high salt concentrations by transporting potassium ions into their cells, rather than by excluding salt, behavior that is more similar to halophilic archaea than to other methanogens.

This study details the “finding of an unusual methane-producing microorganism in that it is only distantly related to all the others that we know of,” said James Ferry, a microbiologist at Pennsylvania State University who was not involved in the work.

In order to confirm that the two lineages do use the methyl-reducing pathway of methanogenesis, the group would need to isolate and characterize relevant enzymes, and create a genetic system in which they could manipulate genes, Ferry said. The authors “were only able to speculate on the more detailed mechanism of growth based on what was known about [other] organisms that have the similar growth characteristics,” he added.

Sorokin explained that another open question is how the organisms use iron sulfide, since it doesn’t appear to get into their cells. But the future direction that most interests him is understanding how this class of archaea functions in the environment.

“The main question now is how they compete,” Sorokin said. In sediment incubation experiments, the team found that “as soon as the conditions are right, [these organisms] immediately jump to domination of 90 percent of the community, but of course how it goes on in the native setting, I still don’t know,” he explained.

“We know that there are many ancient lineages in the prokaryotic world that have never been cultured and haven’t been fully explored,” said Whitman. “This is a good example of how studying these lineages provides much more detail about the early evolution of life.”