The Denisova Cave in Russia, first excavated about 40 years ago, holds fossil clues to the hominin branches on the evolutionary tree that lie close to Homo sapiens. Efforts to track the two species in time have been held back by the limits of different dating methods including radiocarbon dating, which is typically only useful for samples up to roughly 50,000 years old.

Now, two reports in Nature today (January 30) have used several methods to analyze the sediment, fossils, and artifacts of the Denisova cave to paint a clearer picture of who was there and when. The reports suggest that Denisovans and Neanderthals overlapped at this Stone Age hot spot for thousands of years, and that modern Homo sapiens may have once dwelled there, too.

One research group arrived at their age estimates for hominin fossils found at Denisova by comparing the remains’ mitochondrial DNA to reference DNA from other ancient human relatives. Their work suggests Denisovans could have been at the cave as early as nearly 200,000 years ago.

Two Denisovan fossils they analyzed were between roughly 90,000 and 140,000 years old and were older than Denisova 11, a hominin from the same cave who had one Denisovan parent and one Neanderthal parent. The most recent Denisovans checked in at around 55,000 years ago.

The Neanderthal fossils they examined dated from 80,000 to 140,000 years ago. The dates indicate that the two hominin groups crossed paths at the cave and may have even been interbreeding during that time.

See “Girl Had a Denisovan Dad and Neanderthal Mom”

The other researchers analyzed the sediments of the Denisova cave using a method that estimates when its minerals last saw the sun. They came up with list of 103 dates, ranging from 300,000 to 20,000 years ago for artifacts and fossils in the cave. Their work also points to the two groups overlapping in the cave, with Denisovans possibly arriving there 287,000 years ago.

“It now looks like Denisovans can be placed at the site from close to 300,000 years ago to about 50,000 years ago, with Neandertals there for periods in between,” paleoanthropologist Chris Stringer of London’s Natural History Museum who was not part of the work tells Science News.

“There is still much to learn from Denisova,” writes archaeologist Robin Dennell of the University of Exeter in an accompanying commentary. And though there’s still uncertainty because of the complexity of dating methods and the nature of working with fossils and sediments that can be disturbed over time, “the general picture is now clear,” writes Dennell.

One mystery that remains is who crafted the tools and pendants made of bone and animal teeth   found in the cave and that were dated to between 43,000 and 49,000 years ago. While one team suspects it was the Denisovans, “my money would be on early modern humans,” Stringer told reporters, because these studies don’t place Denisovans at the cave more recently than 52,000 years ago. 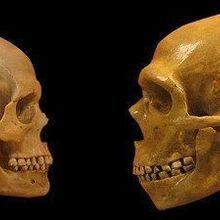