ABOVE: Soy flour is one of the foods shown to spur the growth of gut bacteria that counteract the symptoms of malnourishment.
© ISTOCK.COM, AMARITA

Even once they have enough to eat, kids that have suffered from malnutrition do not grow and develop as well as kids that have always had healthy foods to eat. Two studies published today (July 12) in Science identify differences between the microbiomes of malnourished and healthy kids as well as a combination of foods that, both in animals and in a proof-of-principle study in children, helps shift the microbiome toward a healthier state.

Providing food aid tailored to microbiome health “could be a key to new strategies for improving global public health and human potential,” David Relman, a microbiologist at Stanford University School of Medicine in Palo Alto, California, who was not involved in either study, tells Science.

The two studies are part of a collaboration between Tahmeed Ahmed, director of nutrition research at the International Centre for Diarrhoeal Disease Research, Bangladesh, in Dhaka, who is devoted to fighting malnutrition, and Jeffrey Gordon, a gastroenterologist and microbiome researcher at Washington University in St. Louis, Missouri, whose microbiome research has previously focused on obesity.

In one of the two studies published in Science, the Ahmed and Gordon labs examined the microbes present in fecal samples from healthy and malnourished children to identify the bugs particular to the mature microbiome. In a second study, the researchers identified foods that encouraged the microbiome to mature in mice and piglets transplanted with immature microbiomes. The foods typically found in aid packages—milk powder and rice—did not help the microbiome mature, but chickpea, soy, and peanut flours, plus bananas, did help, Science reports.

The researchers did a proof-of-principle trial to see if the diet that helped the mice and piglets might actually help kids. For one month, Bangladeshi children participating in the study received either standard malnutrition recovery fare or the types of foods that had stimulated the microbiomes in the animal studies. After a month, the children fed the foods the research identified as benefitting the microbiome had higher levels of the microbes associated with the mature microbiome. Their blood also exhibited molecular signatures of healthy growth, such as bone morphogenetic protein.

Next the researchers want to conduct longer trials on the effects of these microbiome-benefitting foods. “[Nutrition] is a key component of human development, and if we’re trying to affect catch-up growth, we want to make sure long-term effects are beneficial,” Gordon tells STAT News. 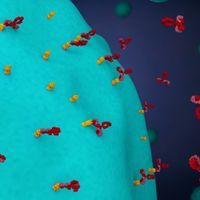