Animals learn by imitating behaviors, such as when a baby mimics her mother’s speaking voice or a young male zebra finch copies the mating song of an older male tutor, often his father. In a study published today in Science, researchers identified the neural circuit that a finch uses to learn the duration of the syllables of a song and then manipulated this pathway with optogenetics to create a false memory that juvenile birds used to develop their courtship song.

“In order to learn from observation, you have to create a memory of someone doing something right and then use this sensory information to guide your motor system to learn to perform the behavior. We really don’t know where and how these memories are formed,” says Dina Lipkind, a biologist at York College who did not participate in the study. The authors “addressed the first step of the process, which is how you form the memory that will later guide [you] towards performing this behavior.” 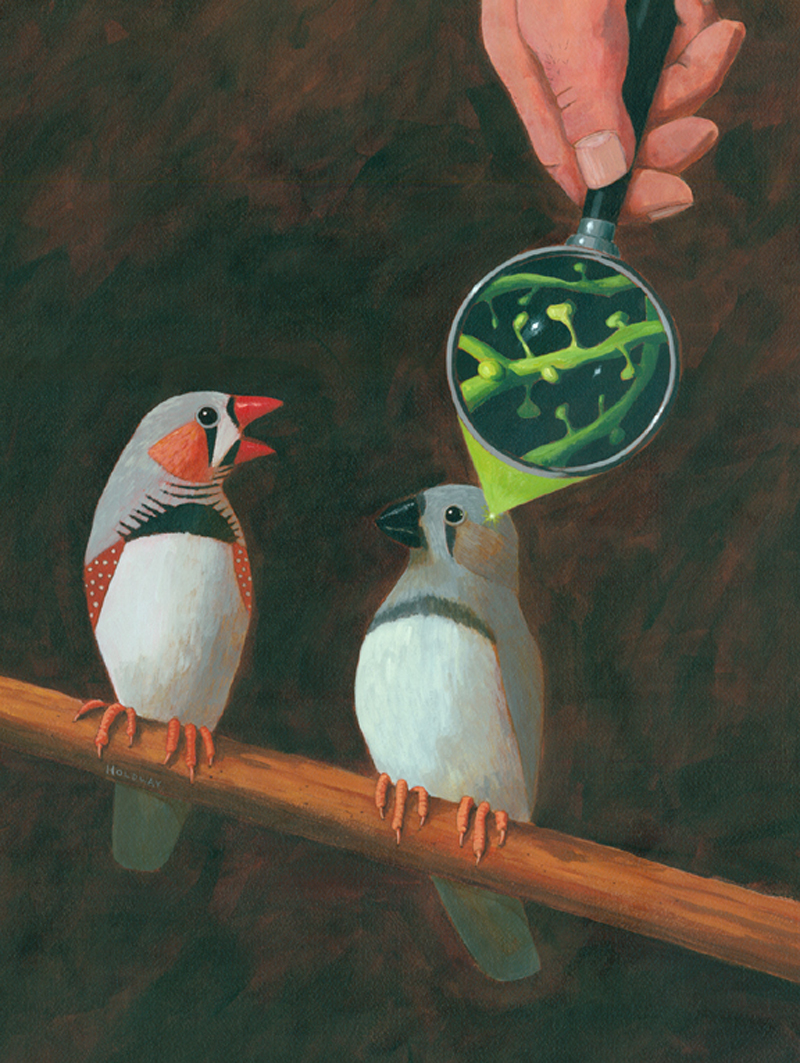 An artist’s interpretation of the involvement of the brain in how young birds learn a tutor’s song.
john holdway

“Our original goals were actually much more modest,” says Todd Roberts, a neuroscientist at UT Southwestern Medical Center. Initially, Wenchan Zhao, a graduate student in his lab, set out to test whether or not disrupting neural activity while a young finch interacted with a tutor could block the bird’s ability to form a memory of the interchange. She used light to manipulate cells genetically engineered to be sensitive to illumination in a brain circuit previously implicated in song learning in juvenile birds.

Zhao turned the cells on by shining a light into the birds’ brains while they spent time with their tutors and, as a control experiment, when the birds were alone. Then she noticed that the songs that the so-called control birds developed were unusual—different from the songs of birds that had never met a tutor but also unlike the songs of those that interacted with an older bird.

Once Zhao and her colleagues picked up on the unusual songs, they decided to “test whether or not the activity in this circuit would be sufficient to implant memories,” says Roberts.

The researchers stimulated birds’ neural circuits with sessions of 50- or 300-millisecond optogenetic pulses over five days during the time at which they would typically be interacting with a tutor but without an adult male bird present. When these finches grew up, they sang adult courtship songs that corresponded to the duration of light they’d received. Those that got the short pulses sang songs with sounds that lasted about 50 milliseconds, while the ones that received the extended pulses held their notes longer. Some song features—including pitch and how noisy harmonic syllables were in the song—didn’t seem to be affected by optogenetic manipulation. Another measure, entropy, which approximates the amount of information carried in the communication, was not distinguishable in the songs of normally tutored birds and those that received 50-millisecond optogenetic pulses, but was higher in the songs of birds who’d received tutoring than in the songs of either isolated birds or those that received the 300-millisecond light pulses.

While the manipulation of the circuit affected the duration of the sounds in the finches’ songs, other elements of singing behavior—including the timeline of vocal development, how frequently the birds practiced, and in what social contexts they eventually used the songs—were similar to juveniles who’d learned from an adult bird.

When the team lesioned the circuit before young birds met their tutors, they didn’t make attempts to imitate the adult courtship songs. But if the juveniles were given a chance to interact with a tutor before the circuit was damaged, they had no problem learning the song. This finding points to an essential role for the pathway in forming the initial memory of the timing of vocalizations, but not in storing it long-term so that it can be referenced to guide song formation.

“What we were able to implant was information about the duration of syllables that the birds want to attempt to learn how to sing,” Roberts tells The Scientist. But there are many more characteristics birds have to attend to when they’re learning a song, including pitch and how to put the syllables in the correct order, he says. The next steps are to identify the circuits that are carrying other types of information and to investigate the mechanisms for encoding these memories and where in the brain they’re stored.

Sarah London, a neuroscientist at the University of Chicago who did not participate in the study, agrees that the strategies used here could serve as a template to tease apart where other characteristics of learned song come from. But more generally, this work in songbirds connects to the bigger picture of our understanding of learning and memory, she says.

Song learning “is a complicated behavior that requires multiple brain areas coordinating their functions over long stretches of development. The brain is changing anyway, and then on top of that the behavior’s changing in the brain,” she explains. Studying the development of songs in zebra finches can give insight into “how maturing neural circuits are influenced by the environment,” both the brain’s internal environment and the external, social environment, she adds. “This is a really unique opportunity, not just for song, not just for language, but for learning in a little larger context—of kids trying to understand and adopt behavioral patterns appropriate to their time and place.”