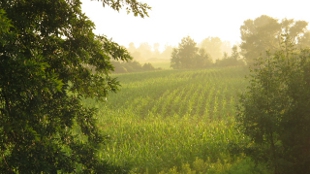 It’s a story suited for a Hollywood horror film, yet it’s also a tenet of evolutionary biology. Introduce a toxin to a system, and you inevitably select for resistant survivors. These few individuals gain a reproductive advantage and multiply; sometimes they can’t be stopped with even the most potent chemicals.

For years, this general plot line made headlines in the fields of antibiotic resistance and cancer research. More recently, plants have become a common protagonist. Weeds around the world are developing resistance to glyphosate—one of the most common herbicides on the market—and like bacteria and tumor cells, many plants can also withstand multiple other toxins, each with unique molecular targets.

In January, a hair-raising infestation of the kochia shrub was confirmed in Alberta, Canada. Originally introduced to desert climates as forage for cattle, the tenacious weed can now survive glyphosate, which targets an enzyme involved...

The United States are also being taken by storm. Palmer amaranth recently developed resistance to the same two classes of chemicals in Tennessee. Since 2009, the tall, spindly weed has swept across 1 million acres of cropland, causing some farmers to abandon their fields. And in California, a plant named hairy fleabane recently crept into vineyards. It is now able to withstand both glyphosate and Paraquat—a chemical that hijacks photons from proteins involved in photosynthesis.

Worldwide, 23 weed species have developed glyphosate resistance, and at least 10 of these have also developed resistance to other herbicides, according to the International Survey of Herbicide Resistant Weeds. And Bill Freese, of the Center for Food Safety in Washington, DC, believes these numbers underestimate the problem. In order for a weed to be listed as resistant, it must survive four times the concentration used to kill susceptible plants. “Some weeds tolerate lower levels of glyphosate, and these also have a big impact in the field,” he says.

Weed infestations are more of a nuisance than a monstrosity—but they are biting into farmer’s pocketbooks. In Arkansas, 61 percent of soybean fields are infested with glyphosate-resistant Palmer amaranth, costing farmers $71 million a year in lost yields, and 80 percent of the state’s cotton is also infested, with losses now totaling $10.9 million.

It’s not uncommon for bacteria to multiply every 20 minutes, but plants have a much longer life cycle and thus a slower rate of evolution. This makes herbicide resistance deceptively improbable. The chance that a single mutation will confer herbicide resistance is 1 in 100,000, making the likelihood of a double resistant mutant less than 1 in 10 billion. Early industry-sponsored research suggested resistance to glyphosate was particularly unlikely because large mutations in the herbicide’s target, the EPSPS enzyme, would render it dysfunctional, killing the plant before it could reproduce.

“The claims made were naïve, and resistant weeds have indeed developed,” says David Mortensen, a weed scientist at Pennsylvania State University. “When a chemical is applied to such a wide area—to nearly all soybean and cotton, and a big percentage of corn—the selection pressure is too intense.”

Indeed, glyphosate use has increased dramatically, from the 4 million or so pounds that were applied to corn in 2000 to 65 million pounds last year, with use on cotton and soy fields also climbing. Much of this increase can be attributed to the incorporation of genetically engineered crops that are unaffected by glyphosate, which is sold by St. Louis-based Monsanto under the brand name Roundup. To help farmers spray glyphosate directly over fields without harming crops, Monsanto released Roundup Ready soy and canola in 1996. Genetically engineered cotton and corn soon followed, and by 2001, the GE crops spanned millions of acres. This is when resistant weeds made their debut.

“Glyphosate has been around since the 1970s, but resistant weeds didn’t become a serious problem until the herbicide was packaged with genetically engineered crops,” says Mortensen.

But according to Rick Cole, who over sees weed management for Monsanto, over-use is not the problem, and the solution is simply to apply a second herbicide with a different molecular target. “The problem is that glyphosate is used alone—over and over again,” he says. “Using a second mode of action reduces the risk of resistance.”

In a set of recommendations released earlier this month (May 10), the Weed Science Society of America suggested that in addition to minimizing herbicide use, farmers also diversify the chemicals they apply to their plants in order to keep herbicides effective for the long term.

Yet combining chemicals doesn’t always work out as planned, says Patrick Tranel, a weed scientist at the University of Illinois. While doubling up on chemicals makes it unlikely that anything will survive, he says, it also “potentially increases the chance of selecting for a general mechanism that confers resistance to both herbicides.”

Weeds can’t grow wings or run away, so in order to survive harsh environments, they have developed diverse, generalized adaptation responses. Recently, Washington University professor Andre d’Avignon stumbled onto a surprising example. Using nuclear magnetic resonance imaging, he and his team traced glyphosate through horseweed, a native plant that infiltrates row crops with windblown seeds. In susceptible weeds, the chemical ended up in the cytosol, but in resistant plants, 85 percent was bound up in the vacuole within 24 hours. This mechanism has also been demonstrated in glyphosate-resistant Italian ryegrass and Rigid ryegrass. “This is a more generic process than the alteration of an enzyme, and it means a single plant can likely adapt to two chemicals at once,” says Mortensen.

In bacteria, multiple drug resistance is often traced to the large, diverse class of ATP-binding cassette (ABC) transporters, which carry an array of chemicals into the cell and organelles. This same class of proteins may help resistant plants sequester glyphosate. Indeed, d’Avignon has found evidence that horseweed may over-express a localized vacuole transporter, and while the protein has yet to be isolated, unpublished results suggest it requires ATP and traffics other chemicals typical of ABC transporters. “If there is an ABC transporter involved, it could possibly transport more than one herbicide to the vacuole,” says d’Avignon, whose work is sponsored by Monsanto.

Another strategy—used by plants and bacteria, alike—is to overexpress targeted enzymes, so that some can still function properly even while others are destroyed by the chemical. Glyphosate-resistant waterhemp, Palmer amaranth, kochia, and Italian ryegrass, for example, all overexpress the EPSPS gene that the herbicide targets. Yet instead of simply upregulating gene expression, glyphosate-resistant plants make multiple copies of the EPSPS gene. “This is very hard to do—it’s much less likely than a point mutation,” says Tranel.

The rise of the resistant

If the situation wasn’t bad enough already, it appears to be snowballing. Weeds in nine different countries have independently developed resistance to multiple modes of action. Some stubborn survivors can now survive most of the chemicals used by farmers, and the infestations are spreading.

Last year, for example, farmers in Iowa reported infestations of waterhemp in their corn and soy fields. The weed has now encroached on 500 acres, and continues to survive treatments of glyphosate and six additional chemicals. The case is a rare example of a weed developing resistance to three chemical classes, each with a unique molecular target. Even more impressive, a biotype of Rigid Ryegrass growing in Victoria, Australia, is now resistant to four chemical classes. Only about 10 acres are impacted so far, but the weeds are predicted to spread.

Despite the seemingly small odds of a plant evolving resistance to multiple herbicides, the dramatic increase in glyphosate-resistant weeds, which now infest more than 17 million acres nationwide, has made this possibility exponentially more likely. “We don’t need a single plant to undergo two unlikely adaptations—we just need one event to happen in a biotype that already has glyphosate resistance,” says Mortensen.

The next wave of genetically modified seeds will be the ultimate experiment, says Freese. Monsanto is developing crops that can be simultaneously sprayed with glyphosate and the herbicide dicamba. Dow AgroSciences plans to market genetically engineered corn seeds resistant to both glyphosate and the herbicide 2,4-D; the US Department of Agriculture is reviewing the technology this summer. “Just as we had an increase in glyphosate [use] after Roundup Ready crops were released, we may soon see a huge increase in 2,4-D,” Freese says. “In our view, this will also lead to weeds with multiple resistance to 2,4-D and glyphosate. ”

Correction (May 24): The odds of a plant developing double resistance to the chemicals mentioned in this story are more like 1 in 10 billion.  The original version stated "less than 1 in a trillion," which reflects a less conservative number. The Scientist regrets the error.

Correction (May 31):  Sixty-one percent of soybean fields in Arkansas, not Alabama, are infested with glyphosate-resistant Palmer amaranth. The Scientist regrets the error.

Correction (August 7, 2014): Andre d’Avignon is at Wasington University, not the University of Washington. The Scientist regrets the error.