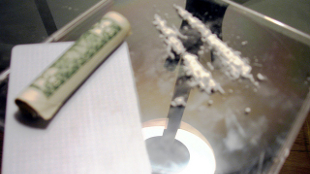 Thanks to the power of optogenetics, researchers in Switzerland have not only established the first causal link between cocaine-induced changes to brain cells and altered physical behavior, they have also reversed these changes. The report appears today (December 8th) in Nature.

The results are “pretty exciting,” said Mark Thomas of the University of Minnesota, who was not involved in the research. “It is a proof of principal of that reversing synaptic plasticity induced by drug experience can change behavior. From that perspective it is a big step forward.”

Just like humans, mice taking cocaine become more physically active and jittery and, with repeated doses, that jitteriness increases—a phenomenon called locomotor sensitization. “The presence of this sensitization shows that the first few doses of drugs cause some changes in the brain,” said Howard Gu of Ohio State University College of Medicine, who also was not...

Indeed, cocaine increases the firing potential of neurons of the nucleus accumbens, a brain area involved in pleasure and reward, explained Christian Lüscher of the University of Geneva, Switzerland, who led the study. That is, “the efficacy with which transmission occurs between the neurons is increased.” But, he added, “there was no proof that this was related to behavioral changes.”

That proof has now been provided through the use of optogenetics—a technique in which light-sensitive ion channels from algae are expressed in specific neurons causing them to trigger action potentials in response to light.

In a slight twist of the technique, Lüscher and his team used light stimulation to reduce activity of neurons in the nucleus accumbens, thus reversing the increased activity, called potentiation, caused by cocaine.

This depotentiating effect was achieved by expressing the light-sensitive channels in cortical neurons that target the nucleus accumbens neurons, and then using rapid light pulses to over-stimulate transmission between the two. But rather than activating the target neurons, stimulation of the cortical neurons actually caused decreased firing in the nucleus accumbens.

When mice that had been given cocaine injections were treated by this optogenetic approach and then given a further dose of cocaine, the locomotor sensitization was no longer apparent. Instead, they were about as jittery as if they had taken cocaine for the first time.

“It is remarkable that it actually works,” said Lüscher. “It was our goal, of course, but that it worked and in such a reliable fashion is very interesting.” The ability to reverse cellular and behavioral changes caused by addictive drugs opens avenues to potential therapies, he added, though such therapies are a long way off.

For one thing, the current mouse model represents only the early stages of cocaine use. Thomas explained that the mice had “just a handful of cocaine injections, which isn’t going to be turning anyone into an addict.”

As addiction progresses the brain changes become more complex, and different brain regions and cell types are affected, Thomas explained. At later stages, “it might not be as simple as depotentiating one set of synapses.” “But,” he added, “it is also conceivable that there might be a key region that you could disrupt—a weak link in the chain of neural adaptations—so that if you knock that one out, you might be able to disrupt compulsive use.”

“The next step is to check other drug-related adaptive behaviors in the mouse,” said Lüscher, or those behaviors that arise with extensive drug use and addiction. His team is using a similar optogenetic approach to look at the reversibility of drug-seeking behavior, for example.

“There is a definite need to do something about addiction,” said Lüscher. Currently, “there is very little effort to find a cure,” he noted. Reversing cellular changes may be “one of the ideas that should get the ball rolling.”