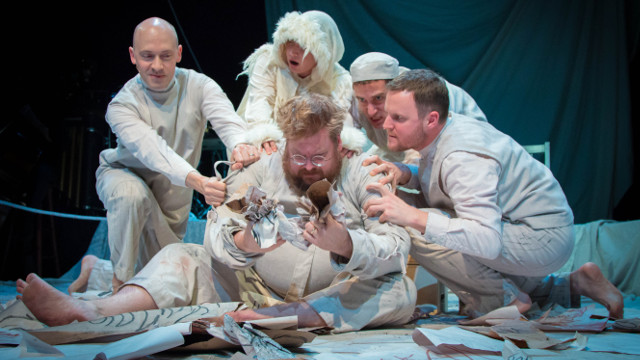 A scene from "Visitations"NOAH STERN WEBERToward the end of her life, Jonathan Berger’s mother suffered from dementia. In the throes of musical and auditory hallucinations, she repeatedly hummed a song that Berger, a composer and music professor at Stanford University, did not recognize. He transcribed the tune.

“Thank heavens for the Internet. I was able to actually track it down,” Berger said. “It turned out to be the number-one hit single in January 1948, in the week that my brother was born. That was a very poignant moment for me. So I got very interested in this issue of imaged, or imagined, sound.”

Both Berger’s personal fascination with the phenomenon and his immersion in the most up-to-date research are on view in “Visitations,” a pair of one-act chamber operas he composed, which explore the theme of auditory hallucinations from the perspectives of those who suffer from them....

These operas are striking, not only for the command performances given by those involved, but also for the scientific accuracy of Berger’s artistic choices.

“Theotokia” reflects the particulars of auditory hallucinations in schizophrenia in its score. The timing of the music—the way it hits, builds, and recedes—mirrors the timing of the onset of musical and auditory hallucinations in schizophrenia. Even the placement of speakers in the auditorium help the audience experience the spatial manifestation of electrical activity in the schizophrenic brain—a feat Berger accomplished with the use of full-sphere surround sound. In other words, if listeners were to visualize the music by where it plays in space, it would map, successively, to the regions of the brain that scientists would find activated in functional magnetic resonance imaging (fMRI) scans. This is a technique called “sonification”— the use of audio to render data.

“The War Reporter” does not employ sonification, but focuses instead on how trauma can trigger hallucinations. Based on interviews conducted with Paul Watson by librettist Dan O’Brien, as well as Berger’s conversations with psychiatrists who work with patients with post-traumatic stress disorder, the work does not pull any punches in conveying the intensity and immediacy of Watson’s anguish.

The greatest strength of “The War Reporter,” and of “Visitations” as a whole, is that the audience is not permitted to be distanced from the protagonist’s experience. It’s one thing to observe prosaically that hallucinations are “all in your head.” It’s quite another to inhabit the head of someone afflicted by these events. Short of virtual reality, “Visitations” might be as close as one who has not felt it can get to living that experience.

“The interesting research question here is, what’s normal and what’s abnormal when we imagine sound?” said Berger. “If we image the brain thinking of a particular sound, the activation in the brain that happens in those regions that activate when you’re actually listening to the sound are exactly the same.”

Norman Adler, a professor of psychology at Yeshiva University who studies abnormal psychology and the origins of religious belief and practice, agreed that the line between “normal” and “abnormal” isn’t so clear. “So that’s why I think [Berger] treats it well, and scientifically, but he humanizes it as well. That’s the triumph of art,” Adler said.