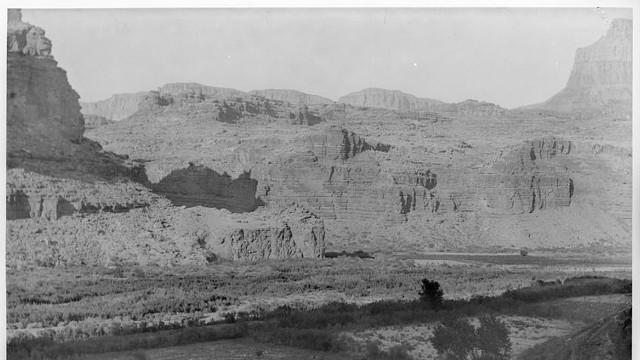 WIKIMEDIA, GEORGE WHARTON JAMESFor having a title that invokes the impersonal, black-and-white machinery of bureaucracy, “Informed Consent” brims with color and life. The one-act play by Deborah Zoe Laufer deconstructs the concept of race with the help of a gregarious, diverse cast of characters. It also deconstructs life itself—both into the basic constituents of DNA, and into the stories we tell ourselves in order to survive.

The place where revered stories cannot be reconciled with hard facts is the battleground where the play’s conflicts take place. Jillian (Tina Benko), the play’s hard-nosed protagonist, is a genetic anthropologist whose zeal for the scientific process approaches— perhaps even surpasses—religious fervor. Her passion, and her stubborn unwillingness to truly respect alternative points of view, bring her into conflict with virtually every other major character, most notably Arella (Delanna Studi), a Native American woman who represents an indigenous tribe that resides in the...

After generations of depredations at the hands of so-called pioneers and the U.S. government, Arella’s once-proud tribe is reduced to eating nutrient-poor, government-issue food, and suffers from a high rate of diabetes. Jillian is assigned to investigate the genetic anthropology of Arella’s people—a touchy proposition, as drawing blood goes against the tribe’s deeply held ancient beliefs. And when Jillian’s zeal for knowledge leads her on a furtive quest to study the ancestry of the tribe—which has its own ideas about its origins—the line from touchy to explosive is crossed.

Jillian’s obsession with genetics is partly personal—she carries the genetic mutation for early-onset Alzheimer’s disease, which she inherited from her mother and is nearly certain of having passed on to her four-year-old daughter, who is also portrayed by Studi. The scientist’s desire to know whether she has passed this mutation on brings her into conflict with her husband, Graham (Pun Bandhu), a happy-go-lucky romantic who is more interested in telling his daughter stories about princesses than asking her to face the harsh realities of life, decay, and death. This reversal of the stereotypical maternal-paternal dynamic is refreshing.

Another highlight of the show is the diversity of its cast, rounded out by Myra Lucretia Taylor, who portrays Jillian’s mother and the dean at her university; and Jesse Perez, who plays Jillian’s mentor, Ken.

The conflict in “Informed Consent” is inspired by a legal dispute between the Havasupai Indian tribe of the Grand Canyon and Arizona State University, whose researchers conducted a Type II diabetes study involving tribe members in 1990. The researchers also used the study participants’ blood to study migration patterns, schizophrenia, and inbreeding—all of which the Havasupai consider taboo. The university paid damages to the tribe in 2010. While researching her play, Laufer had the opportunity to visit with the Havasupai and hear their side of the story.

“My heart always goes with science, but it was mind-altering to see how badly this tribe was affected by the study,” Laufer said. “It was a landmark case—it changed the way consent has to be specified for scientific studies.”

Laufer added that her work on the play raised some unresolved personal conflicts. “Some people have asked me if it was really my story to tell,” she said. “It’s a valid question. I really don’t know what makes someone qualified to tell a story.”

The play is focused on several stories. One particularly memorable scene features a juxtaposition between three very different narratives: Arella telling the story of her tribe’s origins to her seven-year-old daughter; Jillian telling her daughter Natalie the origin story of life as explained by genetics; and Graham telling Natalie a story about a wonderful princess. The scene invites viewers to consider their views on the relative importance of each kind of story, without descending into relativism.

Staged at The Duke on 42nd Street, the play also contains some impressive visual elements. Evidently by coincidence, characters often descend from spiral staircases flanking the stage, echoing the double helices projected onto a wall of white boxes that serve as a screen.

Not everything in the play lands, however. While the cast is without exception talented and enjoyable to watch, the play’s young children are portrayed by adults, an exercise that never fails to induce cringing in this reviewer. And an epiphany experienced by Jillian at the end of the play seems a product less of character than of a desire for a tidy resolution.

These minor flaws aside, “Informed Consent” is a compelling work. And according to Ben Stanger, an associate professor of cell and developmental biology at the University of Pennsylvania, who Laufer consulted in writing the play, it is an urgent one.

“The notion that as there are all these sequencers sitting around idle, waiting to sequence the genome of every one of us—and the attendant questions of privacy, and what we do with information that we don’t want, is very likely to become real for the majority of us over the next decade or two,” Stanger told The Scientist. “So this isn’t a play that’s about an abstract future. This is a play about a real set of issues that there’s a good chance each one of us will have to confront at some point in our life.”

Deborah Zoe Laufer’s “Informed Consent,” produced by Primary Stages and the Ensemble Studio Theatre—commissioned by the Alfred P. Sloan Foundation—opens to the public tomorrow (August 18) at The Duke on 42nd Street and will run through September 13.