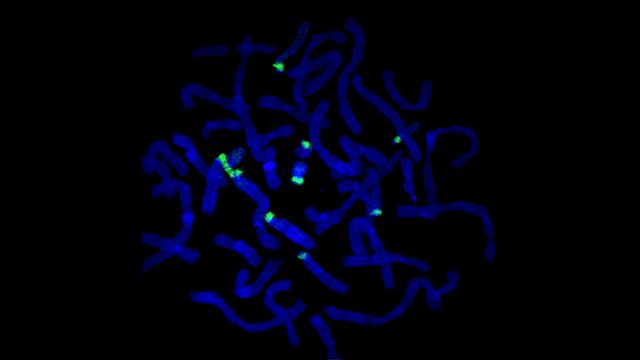 Human chromosomes stained blue and ribosomal DNA in greenTAMARA POTAPOVA (WITH PERMISSION)Ribosomal DNA (rDNA) is highly repetitive, making it tough for scientists to analyze. But a new study, published today (June 22) in PLOS Genetics, reveals that the genomes of cancer cells in both humans and mice have fewer copies of rDNA genes than their normal counterparts. Yet despite this loss, mice show more ribosomal RNA and protein synthesis.

“This is the first comprehensive, in-depth analysis of ribosomal DNA copy number in human cancers,” says Mikael Linström, a cancer biologist at the Karolinska Institute in Sweden who did not participate in the work. “In all labs that are working with ribosome biogenesis and rDNA genes, the question is always: what’s the role of the mysterious rDNA?”

Coauthor Jennifer Gerton, a yeast biologist at the Stowers Institute for Medical Research in Kansas City, Missouri, says that...

Gerton and colleagues analyzed whole genome sequencing data from cancer cells and normal cells from 162 people with various types of cancer and from blood cells in 143 healthy people. In several of the cancer types—osteosarcoma, esophageal adenocarcinoma, and AIDS-related lymphoma—they found that rDNA copy number was reduced compared to normal cells from the same individuals.

“My idea was that the number of copies would expand in the cancer genome because that would allow for the generation of more RNA to make more ribosomes, and that would really promote proliferation,” Gerton says. “But what we found was exactly the opposite. When we did see changes in the human cancer genomes or in the mouse model for cancer, it was loss of copies. The direction of the variation surprised me.”

The authors also quantified rDNA copy number in normal and cancer hematopoietic stem cells from a mouse model of leukemia. They found that the cancer stem cells had lost about a fifth of their rDNA genes, and that they were more susceptible to DNA damage in vitro. These cancer stem cells proliferated more quickly, produced more ribosomal RNA, and overall protein synthesis was higher than control stem cells, in spite of their lower copy numbers of rDNA.

“What’s really important here is to figure out what it all means,” says Peter Scacheri, a genome and cancer biologist at Case Western Reserve University who was not involved in the study. “Does lower rDNA copy number actually have any significance in the development of the cancer or is it just a secondary effect? Is it just some sort of indicator that the cell has undergone transformation, but it’s not actually contributing to the actual cancer? It could very well have a lot of significance with respect to cancer, but I think we don’t know yet.”

Gerton says that she would like to begin a collaboration to explore these and other questions in primary human tumor samples. In the meantime, her group is using yeast to investigate what advantages cells might gain by eliminating copies of rDNA. So far, it seems as though yeast with lower rDNA copy numbers are able to replicate their genomes more quickly, which could be an advantage for cancer cells as well.

“This [study] gets us a step closer to understanding if [rDNA copy number] is cause or consequence or involved in the mechanism of cancer progression,” says Keith Maggert, a cancer and genome biologist at the University of Arizona who did not participate in the work. “Even if it’s just a consequence, work like this shows that maybe rDNA copy number monitoring would be a useful diagnostic for cancer progression.”