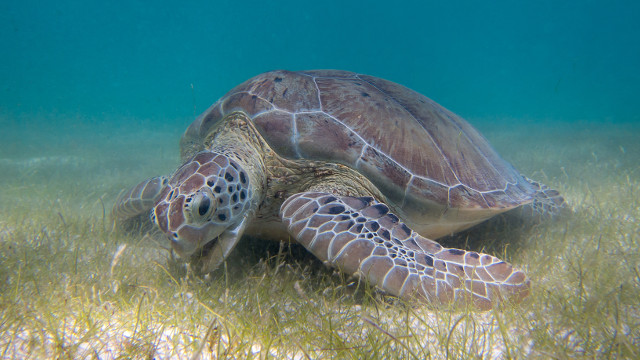 WIKIMEDIA, P. LINDGRENA population of green turtles, whose sex is determined by in-nest temperatures, has become almost 99 percent female in recent decades, according to a report in Current Biology on Monday (January 8). Sea and air temperatures at the population’s nesting area have been steadily rising for the last 50 years, the report claims, leading the authors to conclude that climate change is responsible.

“The authors intriguingly report that the sex ratio of the northern Great Barrier Reef nesting population is substantially more female-biased in younger age classes,” Fredric Janzen, an ecologist and evolutionary biologist at Iowa State University who was not involved in the study, writes in an email to The Scientist. “Essentially, . . . this means the population [has been] producing excess numbers of female hatchlings in recent decades, consistent with the expected feminizing effects of climate warming.”

In theory, “as areas become warmer . . . there are fewer males produced,” Wyneken continues, “and that is what this paper is showing.”

There’s been something happening over the past 20 years, and if it’s not climate change, I’m not sure what it is.—Camryn Allen,
National Oceanic and Atmospheric Administration

Indeed, the study performed by Michael Jensen of the National Oceanic and Atmospheric Administration in La Jolla and colleagues reveals that male turtles from the northern Great Barrier Reef are becoming increasingly rare.

The team made this discovery after analyzing hundreds of green turtles (Chelonia mydas) of different ages at their foraging grounds on the Great Barrier Reef. Once a baby turtle hatches, it heads to the sea where it spends several years in the open ocean. At about four years of age, the turtle then heads to feeding grounds, such as a reef, where it remains until reaching sexual maturity (approximately 25 years of age). It then migrates toward its area of birth to mate and, in the case of females, to lay eggs—sometimes on the very beach she herself was born.

So strong is this fidelity to home that populations of turtles from different origins are thought to only rarely interbreed. As such, turtle populations from the northern Great Barrier Reef differ sufficiently from southern Barrier Reef turtles that the researchers were able to distinguish them by DNA analysis, says Jensen.

The team collected blood samples from 411 foraging turtles to determine their sex (by hormone analysis) and origin (by DNA sequencing). Each turtle’s approximate age was also estimated from body measurements.

“You can see the change over time: one male to every seven females in the adults, one male to 116 in the juveniles,” says study coauthor Camryn Allen also of the National Oceanic and Atmospheric Administration. “So there’s been something happening over the past 20 years, and if it’s not climate change, I’m not sure what it is.”

Allen comes to this conclusion from the team’s analysis of recorded air and sea temperatures from one of the nesting sites of the northern population from 1960 to 2016. These data show that while the now-adult turtles would have been hatched in temperatures close to 29.3 ?C (the temperature at which the sex ratio is 1:1), in more recent decades, when the now-juveniles and sub-adults hatched, temperatures were consistently higher.

The results are correlative rather than definitive, says Jensen, but are nonetheless “worrying.”

Wyneken agrees. “If nothing changes, then it’s going to be a problem,” she says.

The good news is that there are strategies that can be applied to cool the hot northern nesting beaches, says Allen, such as shading the nests and sprinkling them with water.

“But those are band-aids,” says Wyneken. “We can’t out-run increasing temperatures [forever] . . . without making a long-term effort to fix the things that are causing it.”