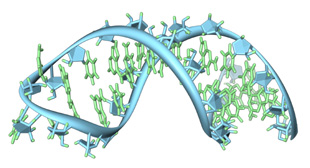 Although previous work identified isolated examples of circular forms of RNA, a new study in PLoS ONE shows that the molecule assumes this shape much more than previously thought. By surveying the full RNA complement of several human cell types for alternative splice variants, researchers at Stanford University identified a significant portion of these are not linear, but circular.

“It’s the global approach” that’s so novel, said Jørgen Kjems, an RNA biochemist at Aarhus University in Denmark, who was not involved in the study. Kjems’s own work on RNA identified a circular antisense RNA transcript of a neuronal gene, targeted by microRNAs and involved in protein suppression.

Rather than examine splice variants for specific genes, the Stanford researchers were using RNA to scan the genome for “scrambled” exons—where nucleic acid sequences in RNA transcripts were out of order compared to their sequence on the chromosome. The...

To do this, the researchers removed ribosomal RNA from tumor cells, then fragmented the remaining RNA before creating a cDNA library to scan. This created a huge array of sequences, a jigsaw puzzle of RNA, that Salzman and her colleagues reassembled by comparing them to databases of known transcripts. Thus the scientists could identify exons that were joined out of sequence, said Salzman.

Instead of discovering a few translocations, the team identified hundreds of scrambled sequences, explained co-author and Stanford University pediatric oncologist Charles Gawad, which suggested that they were finding alternatively spliced RNA. As Gawad and Salzman tried to reassemble the library of sequence fragments, they found that many sequences didn’t seem to fit, unless the scientists modeled the sequences as circles.

Thinking that they’d hit upon a characteristic of cancerous cells, Salzman and Gawad performed the same experiments on normal human cells—and found a similarly high percentage of scrambled transcripts that seemed to be circular. To confirm this, the researchers subjected the RNA to RNase R treatment, which only digests linear transcripts. Most of the predicted circular transcripts resisted RNase R digestion.

One of the reasons the Stanford researchers were able to identify so many circular RNAs when others had not was their unbiased approach, said bioinformatics expert Alexei Fedorov of Ohio University, who did not participate in the research. Rather than pulling out and examining poly-adenylated RNA, which is generally linear, their method retained RNAs without poly-A tails, which most circular RNAs lack.

“It’s an important finding, but the significance is not proven,” said Alberto Kornblihtt, a molecular biologist at the University of Buenos Aires and the National Research Council (CONICET) of Argentina. Kornblihtt, who studies alternative RNA splicing but was not involved in the research, points out that although there are examples of functional circular RNA, “enzymatic reactions are not perfect,” and it remains to be seen how many of the circular transcripts are functional, and how many are “evolutionary noise.”

Salzman agreed that it’s too soon to predict how functionally relevant circular RNA is, but she said she's cautiously optimistic, noting that circular RNAs have been identified in a variety of species.

Gawad pointed to the location of the circular RNAs in the cytoplasm as a hint that some may perform some function. One might expect non-functional splicing byproducts to remain in the nucleus, or to be quickly degraded.

For now, the researchers are investigating how circular RNAs form, hoping to gain insight into the required factors. Later, they might try knocking down the circular form of a specific RNA, to see whether any function can be inferred. The function “is the big question, and really challenging,” said Fedorov. “It will take many years and many labs.”