Molecules that combine elements of RNA and DNA, so-called chimeric molecules, may have been an important step in the emergence of life on Earth from the primordial soup that existed billions of years ago, according to a study published yesterday (September 16) in Nature Chemistry.

The work, reported by Scripps Research Institute chemist Ramanarayanan Krishnamurthy and his postdoc Subhendu Bhowmik, came out of research exploring the transition from RNA-based lifeforms—commonly thought to be the first life on the planet—to the DNA-based life that is ubiquitous today. In making chimeric RNA-DNA molecules, Krishnamurthy and colleagues previously found that they have some advantages that might make them better candidates than pure RNA for the first reproducing molecules.

“There are times when we have mixtures, rather than just the isolated reactants that people typically use, and we get better results,” Nicholas Hud, a chemist at Georgia Tech who collaborated with Krishnamurthy on the earlier RNA-DNA chimera work but was not involved in the new study, tells Quanta. When mixtures are taken into consideration, the emergence of life on Earth in some ways “is not as hard as we might think it is.”

The key advantage of the RNA-DNA chimeras is their instability, the team published in 2016. Although RNA is commonly cited as the most likely first self-replicating molecule, getting it to perform the task in the lab has been challenging, in large part because the double-stranded molecule is so stable that the two stands do not want to unwind. “It’s a real challenge,” Sutherland tells Quanta. “It’s held the field back for a long time.” (Quanta is published by the same organization, the Simons Foundation, that funds an origin-of-life research group that Sutherland and Krishnamurthy are part of.)

In the newly published study, Krishnamurthy and Bhowmik found that the molecules consisting of both RNA and DNA components formed weaker bonds between the strands, allowing them to easily separate for replication. Then, as new strands formed, they preferentially bonded to like structures, yielding molecules of pure RNA and pure DNA. Similarly, chimeric molecules of RNA and an artificial nucleic acid known as TNA, which researchers speculate may represent a molecule that existed before RNA, were better able to yield nucleic acids composed entirely of RNA or TNA components than when starting with RNA or TNA alone.

“If you let the reactions happen in a mixture, they automatically give you the molecules you’re looking for without you actually wanting it,” Krishnamurthy tells Quanta. 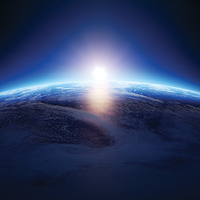