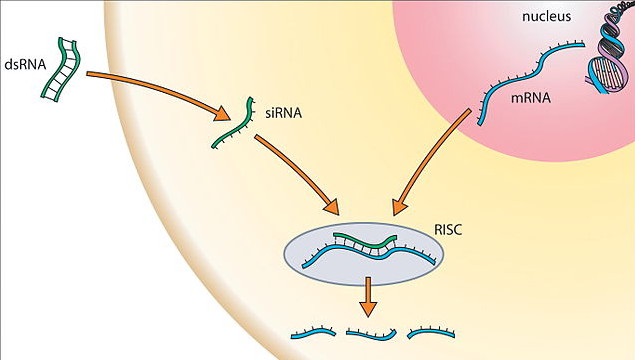 When researchers at Cold Spring Harbor Laboratory set out to confirm cancer cells’ dependence on MELK, a gene coding for a protein kinase shown by countless RNA interference (RNAi) studies to be essential, they weren’t expecting anything unusual. But then they discovered that deleting MELK using gene editor CRISPR-Cas9 had no observable effect on cancer cells at all, turning previous research on its head.

“The study was carefully made—it was meticulous,” cancer researcher Alexey Terskikh of the Sanford Burnham Prebys Medical Discovery Institute, who was not involved in the work, told The Scientist when the paper was published in eLife last month. It provides an example of “why people should use CRISPR for a more rigorous way to ask their question,” he added.

The study was far from the first to contradict reported findings on essential genes—and, therefore, plausible drug targets—from experiments carried out using...

“It’s fair to say that RNAi has had problems for a long time,” said Stanford University’s Michael Bassik, adding that studies like the eLife paper on MELK undermine confidence in the technology. “It has to, at some level. Certainly, if you only read this paper, and you were wondering, ‘Should I use an RNAi screen or a CRISPR screen?’ the answer would be: totally use a CRISPR screen.”

But does it signal the end of the road for RNAi as an identifier of new drug targets? Not necessarily. “You have to be really careful about making those kinds of sweeping statements,” said Bassik. This latest chink in RNAi’s armor “doesn’t mean that RNAi screening is going to be useless for identifying drug interactions,” he added.

But RNAi’s action is notoriously imprecise. By now, “I think everyone is aware of the off-target effects of RNAi,” said René Bernards of the Netherlands Cancer Institute who uses both RNAi and CRISPR in his lab. “It’s the biggest drawback of the technology.” Not only can the introduced RNA molecules interact with off-target transcript sequences with disturbingly low specificity, they also interfere unpredictably with the cellular machinery that regulates gene expression.

“That can have pretty widespread effects,” Bassik said, adding that when those effects are toxic, researchers may end up with a misguided notion of a gene’s role in the cell. “There are plenty of examples where drug companies have used RNAi results to prioritize drug targets to go after, only to discover those results were wrong.”

One of the most infamous examples of such a misidentified target is STK33, a protein kinase that researchers identified in 2009 as essential for the viability of human cancer cells harboring a mutant version of a known oncogene. The original study’s results could not be replicated in other labs, and STK33 was later shown to not be essential at all—though not before it had attracted considerable pharmaceutical industry attention as a potential drug target.

It is little wonder, then, that as CRISPR-Cas9 gene editing becomes increasingly precise, there has been growing interest surrounding the technology’s potential to overtake RNAi in the search for new drug targets. Multiple labs—including Bassik’s and Bernards’s groups—have recently carried out head-to-head comparisons of screens performed using the two technologies.

Off-target effects are “obviously a lot less severe when we deal with CRISPR reagents,” said Bernards. “The [technology] is far more selective.” From his group’s comparison of the methods’ reproducibility, “it’s very clear that the CRISPR screens are less noisy,” he added. “I think that every lab has come to the same conclusion.”

As a result, some labs “have really backed away from RNAi, and substituted CRISPR,” said Harvard Medical School’s Tim Mitchison, who has previously worked on MELK. “A lot of people think CRISPR is just a better way to do things.”

Despite an apparent lack of confidence in RNAi screens, many researchers are not ready to give up on the technology for drug target identification just yet. RNAi knockdown and CRISPR knockout work in different ways: by triggering partial and total inhibition of gene expression, respectively. This distinction becomes particularly relevant when considering drug development.

“It’s very rare for any drug to give 100 percent inhibition of a target,” Bernards noted. “You could argue that if you need to completely remove all of the protein to provoke a phenotype, how likely is it that a drug will [reproduce] that? The answer is maybe not very likely.”

RNAi may have the edge in this respect for now, he added, although CRISPR could soon catch up, thanks to CRISPR interference (CRISPRi), a technology that harnesses CRISPR’s specificity to mediate partial inhibition of transcription.

Another reason that RNAi might survive recent bumps in the road, some researchers argue, is that past mistakes reflect less on the technology than on flawed methodology sometimes used in its application. Ideally, RNAi knockdown results should be validated with what researchers call “the gold standard,” Bernards explained.

“You bring back a version of the [gene] that’s resistant to RNAi—for example, with a mutated target site sequence—and see whether that rescues the phenotype,” he said, adding that this procedure is lacking from many RNAi studies on potential drug targets. “If you don’t do that, you set yourself up for potential trouble.” (MELK received the rescue treatment in glioblastoma cells in 2013, apparently without mishap.)

CRISPR, of course, still has problems of its own. Ralph Garippa, director of the RNAi Core at Memorial Sloan Kettering Cancer Center in New York City, noted that improvements to the libraries of RNAs guiding CRISPR to specific sites in the genome only recently achieved fewer off-target effects. “Not zero, but fewer,” he emphasized, adding that RNAi libraries, meanwhile, are continually improved. “With any emerging technology, you have to fight through the nuances and the shortcomings,” Garippa told The Scientist.

In the meantime, one obvious solution to the problem of target identification and validation is to use both CRISPR and RNAi to validate a target before it moves into clinical research, rather than relying on a single method. “We have CRISPR and short hairpin reagents for every gene in the human genome,” said Bernards. “So when we see a phenotype with CRISPR, we validate with short hairpin, and the other way around. I think that would be ideal.”