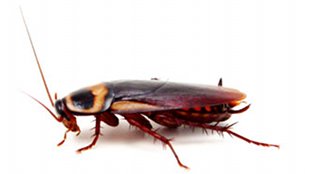 German cockroachWIKIMEDIA, UNITED STATES EPAGlucose is irresistible to most cockroaches and was a standard component of insecticide-laden baits. But these pesky home-invaders have outsmarted humans by evolving glucose-avoiding behavior. And, according to a study published online today (May 23) in Science, the underlying neural mechanism of this behavior is that the roaches find the taste of glucose bitter.

“We’ve known about this form of behavioral resistance for a long time, but there really hasn’t been an explanation as to exactly how this behavioral change occurred,” said Michael Rust, a professor of entomology at the University of California, Riverside, who was not involved in the study. “This is a nice elegant little study that shows there has been a remarkable change in how the bitter and sweet receptors are working in the mouthparts of the cockroach,” he said.

Insecticide-containing sugary baits were introduced in the mid-1980s as...

Early investigations into why the baits were no longer effective revealed an unexpected result. “The obvious mechanism would have been a resistance to the insecticide,” said Schal. “Over a thousand species of insect now have evolved metabolic resistance to insecticides whereby they breakdown the insecticide before it affects them,” he explained. But, as it turned out, this was not the case. “The roaches were perfectly susceptible to the insecticide,” Schal said. Further testing of all the other components in the bait revealed, to everyone’s surprise, that glucose was the compound driving the roaches away from the baits.

“It’s really unusual for [cockroaches] to have evolved resistance to a nutrient in the bait and not the toxin,” said Grzesiek Buczkowski, head of the Urban Ecology Laboratory at Purdue University in Indiana, who was not involved in the study. “Glucose is a very important sugar for the cockroach . . . more than half of their diet is sugar.”

Indeed Glucose-averse cockroaches don’t tend to grow or reproduce as quickly as their glucose-guzzling counterparts, although they easily compete and take over when glucose-containing insecticide baits are around.

Removing glucose from baits and replacing it with other attractants has helped tackle the glucose-aversion problem, said Buczkowski, but it might not be a long-term fix. “If they can evolve [aversion] to one sugar they could possibly evolve [aversion] to another sugar,” he said.

To understand the biological basis of the glucose-avoiding behavior, Schal and colleagues’ new study compared the effect of glucose on wild-type and glucose-averse roaches. They attached electrodes to the tiny hair-like sensilla—which cockroaches use like tastebuds—in the mouthparts of the insects and recorded the activity of the taste receptor neurons. In the wild-type animals, glucose and caffeine—a bitter foodstuff—activated distinct sets of neurons, but in glucose-averse animals the bitter-sensing neurons were activated by glucose as well as caffeine. Glucose still elicited a response in the sweet-sensing neurons of these animals, but it was considerably dampened compared to the response in wild-type roaches. The team concluded that sensing glucose as a bitter taste is what sends the roaches scuttling from the bait.

There are many examples of behavioral changes in insects that thwart humans’ attempts to control them, said Schal, “but this is the first attempt to understand at the neurological level what is going on.” And that’s important, he added, “for developing better strategies to control these insects.”

Rust agreed. “In the past what we’ve done is find a new sugar and hope that it works,” he said. “But maybe if we really understand the mechanism by which behavioral resistance is occurring we could exploit that to our advantage.”