In a career spent almost entirely at Stanford University School of Medicine, Robert “Buzz” Baldwin spearheaded work into the early life of proteins, helping to usher the biological community into the molecular era. The biochemist died last month (March 6) due to pulmonary failure at the age of 93.

“Buzz Baldwin was an outstanding scientist renowned for deep, penetrating thought,” Lloyd Minor, dean of Stanford Medicine, says in a university obituary. “His discoveries laid the groundwork for our understanding of how a newborn protein accurately folds up into its adult shape within milliseconds—an insight that’s informed molecular biology ever since.” 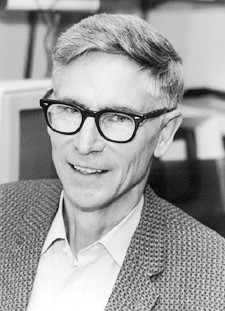 His work focused on how proteins go from simple strings of amino acids to elaborately folded structures that carry out functions in cells—an area of biology about which there were lots of “critical, unanswered questions” at the time, Paul Berg, emeritus professor at Stanford Medicine and a founding member of the university’s biochemistry department, tells Stanford Medicine. Thanks to Baldwin’s research, it’s now clear that proteins must go through various intermediate forms before achieving their final shape, which is necessary for them to function properly.

“Buzz was a giant in the field of protein folding, and a profoundly influential mentor to many,” Stanford Medicine’s Peter Kim, who did his graduate work in Baldwin’s lab, says in the statement. “He exemplified what it means to be a scholar.”

After a year abroad spent at the Max Planck Institute in Göttingen, Germany, and the Pasteur Institute in Paris, Baldwin became a full professor at Stanford Medicine in 1964, and later served as the chair of the biochemistry department. He became emeritus in 1998 but continued his research until just a few years ago.

He is survived by his wife, Anne Norris, sons David and Eric, and five grandchildren.