Sleeping on a rocking surface improves people’s sleep quality and memory consolidation by synchronizing certain oscillations in the brain, according to a study published today (January 24) in Current Biology. The findings add to existing evidence that rocking is beneficial for human sleep, and provide insights into the neural mechanisms underlying the phenomenon.

“Our volunteers—even if they were all good sleepers—fell asleep more rapidly when rocked and had longer periods of deeper sleep associated with fewer arousals during the night,” study coauthor Laurence Bayer of the University of Geneva says in a statement. “We thus show that rocking is good for sleep.”

The team recruited 18 healthy young adults to sleep three nights in the lab: one night to get accustomed to sleeping there, and then two nights in which data were collected, one on a bed that was gently rocked and the other on a stationary bed.

Participants slept more deeply and for longer periods when sleeping on a rocking bed, and memory tests performed in the morning showed that the motion was associated with improved recall of word pairs learned the night before.

The effects appear to be related to the way in which rocking influences brain activity, the authors note in their paper. Electroencephalography data showed that rhythmic rocking movements helped synchronize certain neural oscillations, known as sleep oscillations, in the brain’s thalamocortical networks—circuits important in sleep and memory consolidation.

A second study, also published today in Current Biology, explores how rocking influences sleep in mice—and finds similar effects. As in humans, rocking reduced the time it took for mice to fall asleep and increased sleep duration, although, unlike humans, the mice did not appear to sleep more deeply when rocked than when they were sleeping on a stationary surface.

The study also found evidence for the involvement of sensory systems involved in spatial orientation: Experiments with mice lacking functioning otolithic organs, which contribute to a sense of balance, revealed that the organs were necessary for the animals to get the beneficial effects of rocking.

The findings from the two papers “are critically important,” the University of California, Irvine’s Bryce Mander, who was not involved in the studies, tells Scientific American. “Before these papers, both the mechanisms and the functional significance of the association between vestibular-related rocking and sleep were completely unknown.”

The new insights could lead to treatment options for people suffering from insomnia and other sleep-related disorders, Bayer adds. “This is potentially a very promising avenue for future clinical research.” 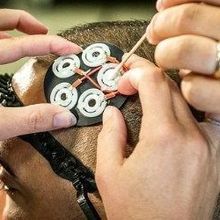