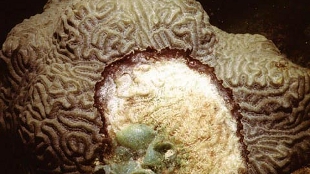 Air contains a multitude of bacteria, up to 10,000 per cubic meter, which researchers have assumed exist in spore or dormant forms. To test this assumption, investigators from Rutgers University in New Brunswick, New Jersey, collected air from several locations from around the state and tried to increase the numbers of microbes using a spare liquid culture containing water and small amounts of salts, acids, and alcohols—conditions that mimic the compounds typically found in the air. The researchers then aerosolized successfully growing bacterial cultures using a reactor that they designed and built in-house, and recorded the amount of the carbon isotope 13 that was incorporated into the bacterial DNA -- a proxy for growth.  Although the results showing some bacterial growth in aerosolized cultures are “tentative,” according to a press release, the investigators are hopeful...

Coral reefs are plagued not only by bleaching events in which they dump their photosynthetic symbionts in response to stress, but also by bacterial disease that can spread rapidly through a colony. Researchers can’t immunize coral against the bacteria because their immune systems are too rudimentary, and antibiotics can’t be applied effectively in open water. Instead, researchers have investigated using a virus that specifically infects and kills the coral bacteria responsible for white-plague-like coral disease in the laboratory with success. A group from Tel Aviv University recently tried the approach in the Gulf of Aqaba, bordered by Egypt, Israel, Jordan, and Saudi Arabia, and found that the virus successfully slowed disease progression and transmission to new corals. For untreated corals, on the other hand, the disease continued to spread throughout the coral tissue and to neighboring corals, killing 65 percent of tissue in 28 days. An added advantage of the approach, the researchers found, was that the virus would replicate as it killed disease-bacteria and spread to other bacterially-infected corals, but would diminish when the bacterial disease was eradicated, mitigating the possible spread of an introduced virus.

Researchers from Columbia University in New York have found that cigarette smoke changes the properties of commensal bacteria, putting smokers at greater risk of their microbiome becoming dangerous.  Staphylococcus aureus is part of our normal flora, but it can also cause disease. Exposure to smoke altered Staph physiology, increasing its ability to stick to human cells as well as inanimate objects; increasing its genetic mutations, which could lead to antibiotic-resistant strains; and enhancing its ability to grow as a biofilm. Chronic infections are often caused by bacteria that grow as biofilms, and researchers found that their observations were consistent with the increased incidence of difficult-to-treat infections with smoke exposure.

About 40 percent of preterm births are attributed to vaginal bacterial infections. But treating bacterial vaginosis does not reduce the risk of preterm birth, suggesting that doctors could be treating the wrong types of bacteria. In order to improve treatment, researchers from the University of Michigan searched for the strains of bacteria that were most likely to be associated with preterm birth by sampling women who previously had at least one preterm labor.  They found that bacteria belonging to the genera Mobiluncus, Atopobium, Mycoplasma, and Clostridiales were each associated with increased risk, while a lower risk was associated with the protective bacteria Lactobacillus. Further research is needed to determine whether specific treatment of these strains might help improve patient outcomes.