ABOVE: A brain organoid cultured from human stem cells in which some cells are infected with SARS-CoV-2. Viral protein is stained red, and neuron nuclei labeled in blue.
SONG ET AL.,YALE UNIVERSITY

With no ideal animal model that mimics how SARS-CoV-2 infection leads to COVID-19 in people, several research groups are turning to mini-organs grown from human stem cells to better understand whether and how different organs could become potential targets of infection.

In a preliminary, not-yet-peer-reviewed study posted June 26 to bioRxiv, a team of Yale University researchers report that SARS-CoV-2 is capable of infecting and replicating in neurons in human brain organoid models. While the finding is consistent with two other, smaller studies, there’s no clear evidence so far that the virus can infect brains.

“I think these [organoid] papers are interesting, but it’s too early to know how to put [them] in context of the rest of the infection,” says Avindra Nath, a neurovirologist at the National Institutes of Health who wasn’t involved in the research.

It’s becoming increasingly clear that COVID-19 causes not only respiratory ailments, but also a wide variety of neurological symptoms—from the common phenomenon of losing taste and smell, to more recent reports of ischemic stroke, delirium, and hallucinations—raising questions of whether such symptoms are a byproduct of various disruptions SARS-CoV-2 causes throughout the body, a consequence of the trauma of being hospitalized with COVID-19, or if they could be due to viral invasion of neural tissues. Earlier this year, Eric Song, a graduate student in immunologist Akiko Iwasaki’s lab at Yale, and PhD student Ce Zhang started to investigate whether SARS-CoV-2 was capable of infecting neurons of the central nervous system.

I definitely don’t want people to start panicking and thinking that this is a brain infection . . . there’s no proof for that.

The team used nine-week old brain organoid models—blobs of tissue that in this case formed a simplified version of the community of neurons that inhabits the cerebrum—which had been grown from induced pluripotent stem cells. When the tissue was exposed to SARS-CoV-2, the virus readily infected increasing numbers of cells over the course of four days, suggesting that the coronavirus can use the machinery of neurons to generate more copies of itself. “I wasn’t surprised to see that [the] neurons do become infected,” Iwasaki says, “but I was a bit surprised to see how efficiently they [became] infected.”

The team also observed large numbers of cells dying within the organoid, yet curiously, those often weren’t the same cells that were infected, suggesting that infected cells damage their neighbors, possibly by gulping up oxygen from the environment in the process of manufacturing copies of the virus, Iwasaki says. Interestingly, an analysis of transcribed genes in the coronavirus-infected organoids pointed to an upregulation of pathways related to cell division and metabolic processes—a contrast to Zika virus–infected organoids, which primarily upregulate inflammatory pathways. “This virus surprises me [at] every turn, because it doesn’t produce the typical set of . . . gene signatures that we’re used to seeing with other viruses,” Iwasaki says.

An important question to the team was whether SARS-CoV-2 was using its typical route of entry—via the ACE2 receptor—into human cells, given previous reports suggesting that mRNA abundance of ACE2 is very low in brain tissue. Although Iwasaki and her colleagues found that ACE2 mRNA was indeed sparse within the organoid neurons, they found widespread ACE2 protein on the surfaces of certain neurons. Perhaps, she explains, it’s a protein that requires very little mRNA to manufacture, such that transcript levels aren’t a good indicator of protein abundance.

In addition, the researchers found they could block viral infection by administering an ACE2-blocking antibody to the culture, suggesting that even in brain tissue, the receptor “can be used by the virus to enter the cell,” Iwasaki says.

“This is an excellent study . . . really comprehensive and addressed a lot of questions,” remarks Lena Smirnova, a neurotoxicologist at Johns Hopkins University who wasn’t involved in the research. She sees the results as a validation of her own findings, recently published as a short communication in Alternatives to Animal Experimentation, in which she and her colleagues also observed replication of SARS-CoV-2 in some neurons in a type of human stem-cell derived organoid called a BrainSphere.

Such organoid studies have limitations, Smirnova notes. For example, they lack microglia cells, which may play some role in antiviral defense. In addition, neural organoids lack the blood-brain barrier that would normally confer some degree of protection against most viruses, although Iwasaki notes it’s possible that SARS-CoV-2 could circumvent this barrier by entering the brain through the olfactory system, something that’s been shown in mice infected with common cold–causing coronaviruses. 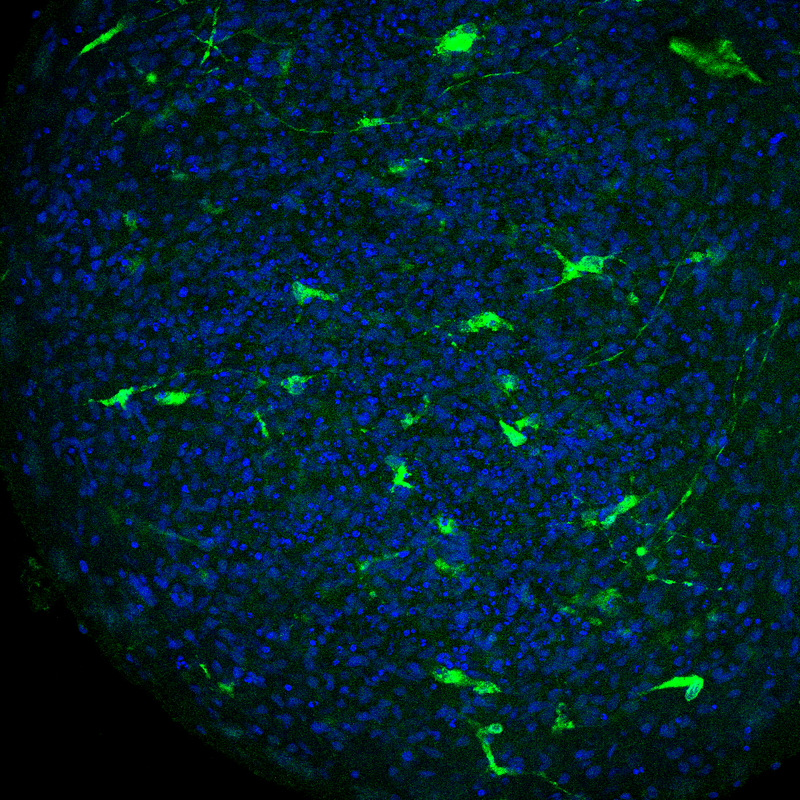 If infection of the brain can feasibly occur in some people, it’s certainly not common, Nath stresses. Some examinations of autopsied brains from COVID-19 patients have discovered only low levels of viral RNA transcripts, and one preliminary study reported the presence of viral protein, but none so far have found evidence of replicating virus. In Nath’s own unpublished studies of autopsied COVID-19 brains, “we haven’t found any infection either,” he says.

For Nath, the takeaway from the Yale study is that when ACE2 is present at the levels at which it’s expressed in human organoid models, SARS-CoV-2 is capable of infecting neurons and hijacking their protein production machinery to replicate. However, whether this can occur in healthy human brains depends on the extent of ACE2 expression there. Nath’s interpretation of the literature is that neither ACE2 mRNA nor protein are produced at high enough levels and across enough brain regions to allow for coronavirus invasion.

The high levels of ACE2 protein Iwasaki’s team observed in organoids could perhaps be an artifact of the organoid system, Nath suggests. It’s possible that ACE2 expression could be induced in brain neurons under specific and likely rare pathological circumstances, such as severe inflammation, he speculates. “The final verdict may not be entirely out, but [the capacity to invade and thrive in neural tissue] certainly isn’t a major issue with this virus.” Neurological symptoms observed in COVID-19 patients could be explained by persistent immune reactions that could somehow impair neurological function, he adds.

Smirnova and Iwasaki, however, note several reports suggesting some ACE2 protein in certain patches of the human brain, as well as evidence of coronavirus genetic material inside brain neurons of patients who died during the SARS epidemic in China in the early 2000s, indicating that the original SARS virus could infect brain cells. Scientists don’t yet have a detailed idea of the role of ACE2 in the central nervous system, Smirnova notes in an email to The Scientist. “More detailed analysis is needed to figure out what cells are expressing it and the level of expression.”

Iwasaki agrees that if brain infection can occur in COVID-19, it would only affect a subset of patients. “I definitely don’t want people to start panicking and thinking that this is a brain infection, causing brain infection in everybody . . . there’s no proof for that,” she says. “It’s sort of a proof-of-concept study, to demonstrate that the brain can become infected, but whether it is and to what extent, and what disease it causes in humans—that requires further studies.”