Scientists know a lot about how SARS-CoV-2, the virus responsible for the COVID-19 pandemic, gets into cells. Now, in a study published October 27 in Cell, researchers have determined that mouse hepatitis virus and SARS-CoV-2, both of which are members of the β-coronavirus family, get out of cells via lysosomes, organelles responsible for taking out cellular garbage, rather than using the biosynthetic secretory pathway used by most other enveloped viruses.

“There hasn't been a whole lot of cell biology done on coronavirus assembly and release from cells, which is important . . . because we have no antivirals that target these later steps of the virus infection cycle,” says Carolyn Machamer, a cell biologist at the Johns Hopkins University School of Medicine who was not involved in the study. This work not only points to new potential targets for inhibiting the later steps of infection, but also provides new understanding of the basic biology of these viruses, she adds.

About five years ago, Teegan Dellibovi-Ragheb, then a postdoc in cell biologist Nihal Altan-Bonnet’s lab at the National Heart, Lung, and Blood Institute, started to investigate how β-coronaviruses—the family that includes the pathogens that cause MERS and SARS—get out of cells. She found that the β-coronavirus mouse hepatitis virus (MHV), which causes severe pneumonia in mice, doesn’t use the same secretory pathway that most viruses that have an outer lipid and protein envelope—including γ-coronaviruses, which infect birds—use. After Dellibovi-Ragheb moved on to another job, though, Altan-Bonnet says that no one else in the lab wanted to take up the project to determine how these viruses were getting out of infected cells.

“Not many people were interested in coronaviruses,” she says. “And then the pandemic hit.”

Altan-Bonnet and Sourish Ghosh, a current postdoc in the lab, got to work, infecting different cell types with either MHV or SARS-CoV-2. The researchers found large numbers of the coronaviruses in lysosomes around the time in their lifecycles that they’d be expected to be getting out of the cells to infect new ones. Furthermore, when the researchers blocked the movement of lysosomes to the plasma membrane in the MHV-infected cells, a key step in lysosome-based exocytosis, they detected much less viral RNA outside the cells. These findings indicate that β-coronaviruses use lysosomes to exit cells.

Lysosomes are typically quite acidic, with a pH around 4.5 to 5.0. This allows specialized enzymes to degrade waste within the lysosome, but not if something went wrong and these enzymes made it into the cytoplasm. The research team determined that the lysosomes were somehow being deacidified during MHV infection. Lysosomes in cells infected with MHV had an average pH of 5.7, while the uninfected control cells’ lysosomes had an average pH of 4.7, leading to reduced lysosomal enzyme activity in infected cells, which would allow the viruses to exit the cells intact. 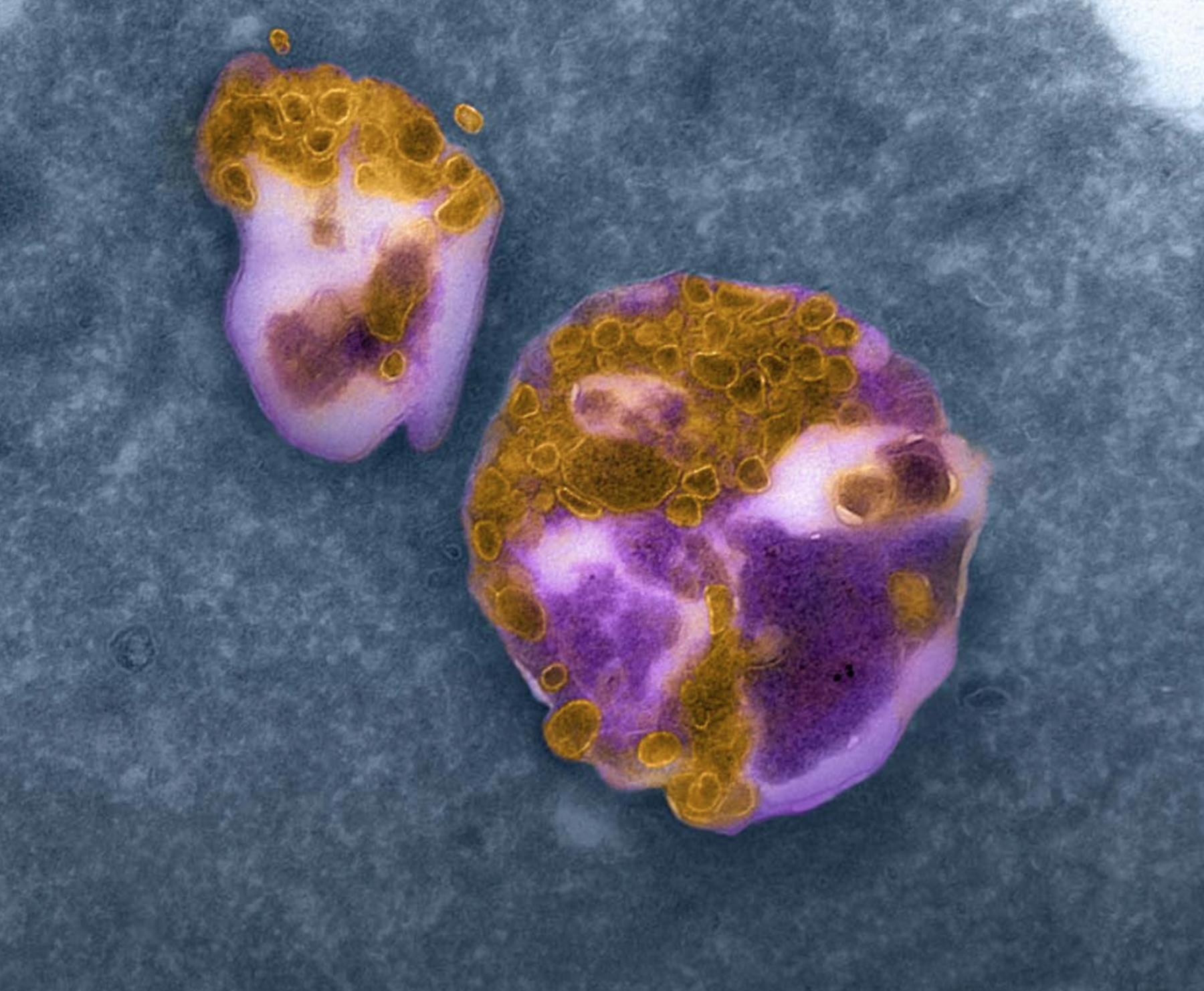 Based on previous work from other groups and the researchers’ new evidence that the SARS-CoV-2 protein ORF3a is localized to the lysosomes of infected cells, they hypothesize that it may be involved in neutralizing the pH; they are planning future studies to further investigate the protein’s role.

“We were certainly surprised that it’s using this pathway to get out,” says Altan-Bonnet. While some viruses without a lipid and protein envelope—such as reovirus, which causes mild gastrointestinal upset in people—do exit cells via lysosomal trafficking, she adds, “it’s not the typical pathway for enveloped viruses.”

Abnormal immune responses—such as the cytokine storm—can be a feature of COVID-19, and the process of lysosomal degradation had been previously shown to be critical for antigen presentation, which allows immune sentinels to identify and kill infected cells. Altan-Bonnet shared the findings with her husband, Grégoire Altan-Bonnet, an immunologist at the National Cancer Institute, and they and their colleagues hypothesized that “maybe the fact that the virus escapes from a different pathway completely messes up the normal immune response,” he says. Indeed, the research team found alterations in both antigen presentation and subsequent immune activation in MHV-infected cells, indicating that antigen presentation had been disrupted.

“Clearly, this virus is using a different pathway than what we thought previously,” says Billy Tsai, a cell biologist at the University of Michigan who did not participate in the study. Some of the open questions center on how the virus deacidifies the lysosomes and then uses the lysosome trafficking pathway, he adds, and it will also be important to see confirmation of these results from other groups. “There’s going to be a lot of excitement in trying to unravel how these viruses, especially SARS-CoV-2, go through the host cells and then get out.”

In addition to the basic science questions, the research team is focusing on how their findings relate to COVID-19’s pathology. “We follow the literature from the clinical side, and people are making tons of measurements about the cytokine storm and coagulation issues, and there is really not a mechanism which explains how all these things fit together,” says Grégoire Altan-Bonnet. He and his colleagues are now exploring whether or not viral egress via lysosomes can explain the immune imbalances in patients.

The researchers are starting with MHV, in part because it’s safe to work with under biosafety level two conditions, unlike SARS-CoV-2, which requires biosafety level three. “Of course, the mouse strain is not the human strain,” says Nihal Altan-Bonnet. “Since we saw the acidification in the CoV-2 infected cells, we’re hopeful that we’re going to see the same effects across different coronaviruses.”