ABOVE: Merged images illustrate multiple antibodies (green and red) binding to the wildtype SARS-CoV-2 spike protein, which is produced by human cells (DNA in blue, left). In cells (DNA in blue, right) that produce a version of the spike protein with deletions, some antibodies fail to bind (absence of green), while others (red) still attach well.
KEVIN MCCARTHY AND PAUL DUPREX

When SARS-CoV-2, the virus behind the COVID-19 pandemic, first emerged, scientists expected it to evolve slowly because the virus copies its big RNA genome with a polymerase that also corrects errors, thus minimizing the chance for certain types of mutations. This enzyme functionality isn’t present in other RNA viruses such as influenza and HIV, which accumulate single nucleotide polymorphisms, where one nucleotide is substituted for another, much more quickly than SARS-CoV-2 does.

This genomic stability was thought to be good news for vaccine design, but it’s become apparent in recent months, with the emergence of B.1.1.7, B.1.351, and other variants, that SARS-CoV-2 is mutable—and might put up a fight against neutralizing antibodies that go after the spike protein of the virus. In a study posted as a preprint in November and published February 3 in Science, researchers showed that SARS-CoV-2 tends to delete portions of RNA that encode the N-terminal domain (NTD) of the spike, a mutation that its proofreader can’t detect. These findings and those of other groups offer an explanation for how new SARS-CoV-2 variants arise and escape antibody recognition by the host immune system.

Deletion “represents a way to rapidly alter an entire stretch of amino acids and more rapidly alter the structures that those amino acids are contributing to,” says coauthor Kevin McCarthy, a virologist at the University of Pittsburgh. These mutations “could accelerate [SARS-CoV-2] evolution and then complement mutations that it’s already making.”

The project started when two physicians at the University of Pittsburgh Medical Center contacted Paul Duprex, a virologist and the director of the Center for Vaccine Research at Pitt. The doctors had an immunocompromised cancer patient who passed away after a SARS-CoV-2 infection that lasted 74 days and did not respond to common treatments, including Remdesivir and dexamethasone. So Duprex and his team took a look at the viral genome to see if they could figure out why the infection lasted so long.

From samples aspirated from the patient’s trachea 72 days after the initial COVID-19 diagnosis, the researchers isolated viral RNA from several SARS-CoV-2 variants, which likely evolved from one initial infection during the long illness, and sequenced the S gene, which encodes the spike protein. They found two variants that contained different three-nucleotide deletions in the NTD of the spike protein.

Duprex mentioned the findings to McCarthy, who, with help from collaborators, combed through the nearly 150,000 SARS-CoV-2 sequences that had been deposited by the end of October 2020 in the Global Initiative on Sharing All Influenza Data (GISAID) database. The researchers found 1,108 viral genomes that had deletions of varying lengths in the S gene, 90 percent of which were located at one of four sites in the NTD.

Many of the deletions were in patient samples that appeared to be persistent infections, similar to the one the Pittsburgh patient experienced. And some of the most concerning new variants, including B.1.1.7, initially identified in the UK, and B.1.351, first spotted in South Africa, have one or two of these short deletions in the NTD, along with a cluster of mutations in the receptor binding domain (RBD) of the spike, which must attach to the ACE2 receptor in order to enter host cells. 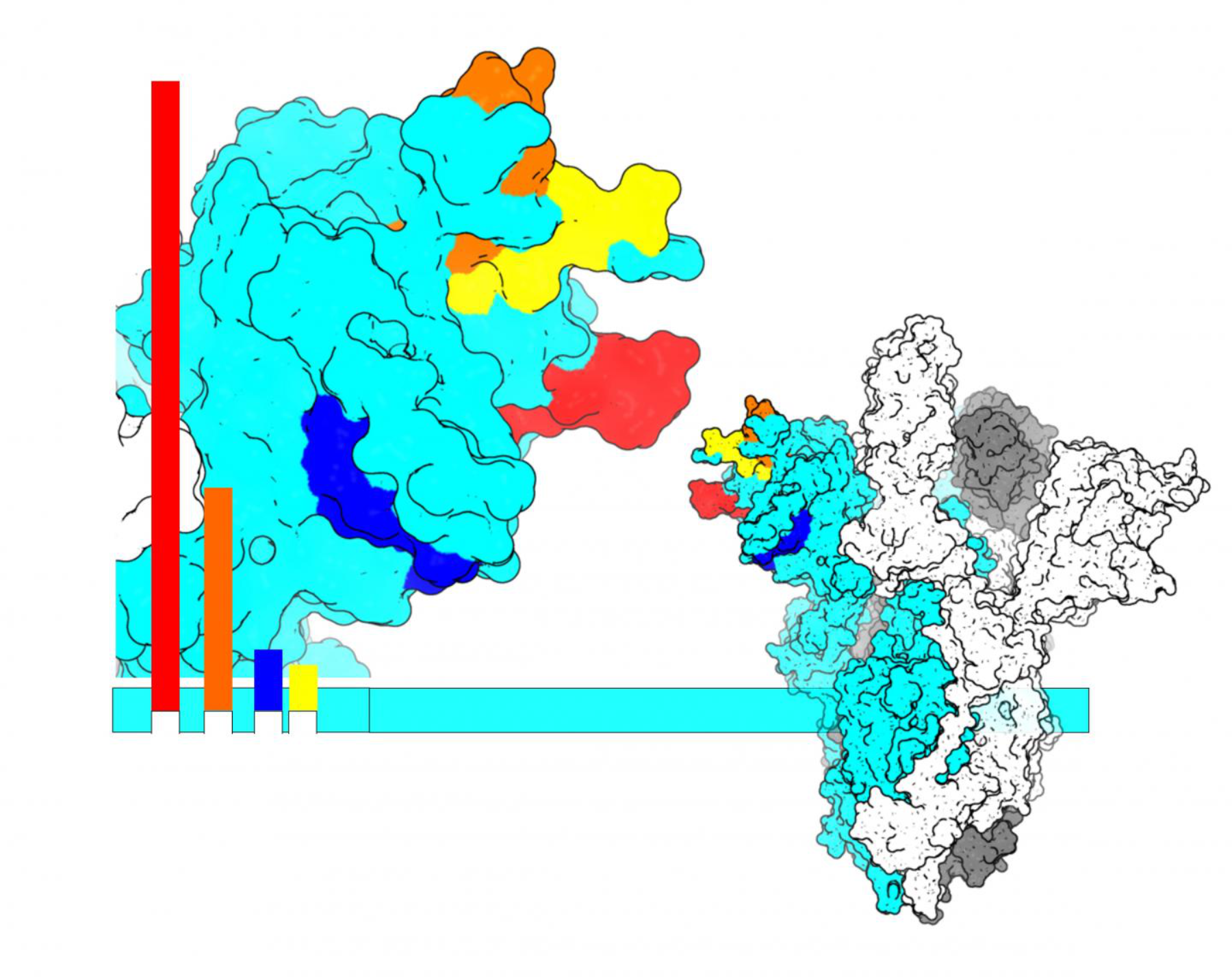 Deletions in the SARS-CoV-2 spike protein sequence (horizontal cyan bar) affect the shape of different parts of the protein (cyan). The bar graph at left shows the relative frequency of recurrent deletions in the correspondingly colored parts of the spike protein. Deletions tend to occur outside the region that binds to cells at the beginning of the infection.
KEVIN MCCARTHY AND PAUL DUPREX

The researchers then tested whether six of these deletions would disrupt antibody binding. Three of those deletions and one deletion combination in the NTD eliminated the ability of an antibody previously isolated from a convalescent patient to neutralize the virus. This specific antibody completely lost its effectiveness, but convalescent serum, which contains a full set of antibodies, not just one, did neutralize each of these variants.

The next steps are “to catalog the effects of these deletions on a large collection of plasma samples,” including from survivors and vaccine recipients, Theodora Hatziioannou, a virologist at the Rockefeller University in New York who was not part of the work, tells The Scientist. She says this could help answer questions about vaccine efficacy, reinfection, and if vaccines design should account for deletions. These mutations are “just a part of all the variation seen in spike at the moment.”

The Moderna and Pfizer/BioNTech vaccines, which are the only two approved for use in the United States, both include RNA encoding the full-length spike protein. Once injected into a person, the RNA is translated into protein, and the recipient’s immune system then responds to and develops a memory of the encounter. According to a COVID-19 vaccine candidate tracker published on February 12 by the World Health Organization, 11 vaccines that initiate immunity to just the RBD of the spike are at various stages of clinical trials.

“The message to the vaccine world is that it was the correct choice to use full length spike . . . and those others, who based [strategies] only on the RBD, are missing” parts of the protein, in this case the rest of the spike, particularly the NTD, which patients have been shown to mount an antibody response to, says Gregory Ippolito, an immunologist at the University of Texas (UT) at Austin who was not involved in the work. Ippolito and his colleagues, part of a team led by George Georgiou at UT Austin, posted a preprint to bioRxiv in December showing that more than 80 percent of the antibodies to portions of the spike in four convalescent patients bound to domains other than the RBD. Thus, vaccines that leave out portions of the spike protein don’t give recipients’ immune systems the chance to develop a full complement of antibodies to protect them from the virus, and risk becoming less effective when the spike protein mutates.

The study also points to considerations for therapeutics that give passive immunity, such as antibody cocktails, says Jason Lavinder, another member of the team at UT Austin. It’s important to include “in those cocktails not just RBD-directed antibodies, but also NTD-directed antibodies.”