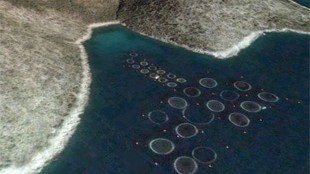 The fishing industry is notorious for underreporting the number of organisms that are being fished out of the world’s oceans every year. To this end, publicly available satellite imagery may prove a valuable tool for monitoring fishing practices worldwide as well double checking official data released by countries and organizations.

In a study published today (February 8) in PLoS ONE, researchers used Google Earth to count and measure the number of coastal fish farms in 16 countries on the Mediterranean Sea in 2006 and estimate the amount of fish that were harvested from those operations that year.

They found that while the overall fish production in the Mediterranean was close to what the United Nations Food and Agriculture Organization (FAO) reported for the region, several countries...

“This is a brilliant application of Google Earth to a present day problem,” said Jon Erlandson, director of the Museum of Natural and Cultural History at the University of Oregon who was not involved in the study. “This sends a signal to fisheries managers and fisheries industries around the world that they have to be reporting their data accurately.”

Based on publicly available data on the types of species farmed by each of the 16 Mediterranean countries as well as optimal cage volumes, densities, and harvesting rates, the researchers estimated that around 225,736 tons of fish (not including tuna) were harvested from the Mediterranean Sea that year. FAO had reported 199,542 tons for the region.

But when the team analyzed the results for each country individually, they found that countries with the largest aquaculture industries, such as Greece and Turkey, tended to underreport their fish production. Conservative estimates, which assume that the fish cages observed ran at 75 percent capacity throughout the year, suggested the actual numbers of fish farmed in Greece and Turkey were 30 and 18 percent higher, respectively, than what the countries had reported to FAO.

“If the cages were running at maximum capacity we would be looking at around 50 percent underreporting,” Trujillo said.

Nevertheless, the fact that the estimates were for the most part “dead on” to what most countries were reporting was encouraging, Trujillo said, and shows the promise of Google Earth as a watchdog. (Read our February 2012 feature on the use of satellites to study large-scale biology).

“It is very reassuring to think that, especially in the oceans, which to most of us are relatively inaccessible, I can sit here in my living room and see what is going on,” Jacquet agreed.

“These satellite images can help us identify those who are not acting responsibly,” Trujillo said. “To do this you don’t have to ask for a million dollar grant, you just need enough time and a good set of eyes.”

Trujillo, who is now a science advisor for Greenpeace International, said he’s currently in talks with Google Earth about expanding the project in the near future. “We’ll be looking at illegal and unreported fisheries around the world,” he said.