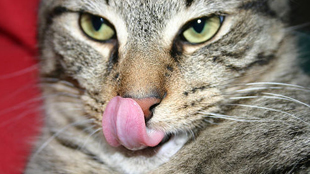 Behavioral biologist Gary Beauchamp first observed that cats have no preference for sweets in the late 1970s. Three decades later, he and colleagues at the Monell Chemical Senses Center in Philadelphia figured out why—cats lack sweet taste receptors. Now, the same team reports that many more mammalian species have lost their sweet tooth: seven of 12 species they examined had mutated sweet taste receptors.

The results, published today (March 12) in the Proceedings of the National Academy of Sciences, suggest that loss of taste receptor function in mammals is a widespread phenomenon that independently evolved multiple times, and may be related to carnivorous mammals’ feeding behavior.

“Genes for taste receptors exemplify the saying ‘use it or lose it,’” said Steven Roper, who studies taste reception at the University of Miami and was not involved in the study, in an email. The current study shows just how...

In mammals, sweet taste is mediated by the type 1 taste receptor, made up of two closely related G-protein coupled receptors, Tas1r2 and Tas1r3. Beauchamp and his team sequenced Tas1r2 in 12 species from the mammalian order Carnivora. They found mutations in Tas1r2 in 7 of the species—sea lions, fur seals, Pacific harbor seals, bottlenose dolphins, Asian small-clawed otters, spotted hyenas, cat-like fossas from Madagascar, and banded linsangs (a type of civet). “I was dumbfounded how common it was,” said Beauchamp. The remaining 5 species—aardwolf, Canadian otter, spectacled bear, raccoon, and the red wolf—had intact Tas1r2s.

The team backed up their molecular findings with two behavioral tests: Asian small-clawed otters, with a defective Tas1r2, showed no clear preference for sugars, while spectacled bears, which have an intact Tas1r2, showed strong sweets preferences.

None of the mutations disrupting Tas1r2 were shared between any 2 of the 7 species, suggesting that the loss of the sweet taste receptor occurred independently many times during the evolution of the Carnivora order, the authors concluded.

In addition, all 7 species that lack functional Tas1r2 receptors feed exclusively on meat, so it is possible that certain feeding behaviors favor the loss of sweet taste receptors, said Beauchamp. But because two of the animals with functional Tas1r2 receptors are also strict carnivores, it isn’t a hard and fast rule, he added. “It may be one of those things that it happens regularly but not necessarily all the time."

The team also took a closer look at other taste receptors in two aquatic mammals—sea lions and bottlenose dolphins—which have previously been shown to have fewer taste buds than other mammals. Both species also have mutated umami, or savory, taste receptors, and dolphins also appear to lack functional bitter taste receptors. Because these species swallow their prey whole, it is likely they are not making food choices based on flavor. “It could be that they live in a world without taste,” said Beauchamp.