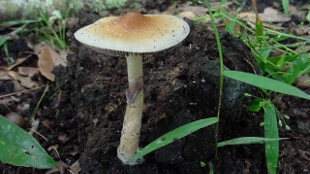 The geometric visuals and vivid imaginings experienced by those tripping on mushrooms are not, as scientists had suspected, the result of increased brain activity, according to a report out today (23 January) in Proceedings of the National Academy of Sciences. Instead, under the influence of psilocybin—the psychedelic component of magic mushrooms—brain activity and connectivity decrease. The reduced connectivity might be what frees people’s minds from normal constraints, the researchers propose.

“It was often thought to be the case that these classic hallucinogens must increase brain function—you know, they expand awareness, expand consciousness—but in fact what we see is decreased activity,” said Roland Griffiths of Johns Hopkins Bayview Medical Center, who was not involved in the study.

“I have to say this was totally unexpected,” said David Nutt of Imperial College London, who led the study.  But, he added, “when you get exactly the...

Although humans have used magic mushrooms for centuries if not millennia, very little is known about how they work. Soon after psychedelics gained widespread popularity in the 1950s and 60s, “the drugs were criminalized and the research into their beneficial uses was suppressed,” explained Rick Doblin of the Multidisciplinary Association for Psychedelic Studies, which partly funded the study.

Because of psilocybin’s illegality, organizing and performing the new study was a regulatory ordeal, said Nutt. “You have to go through lots of hoops and get special licenses. You’ve got to have special cupboards and fridges to hold it… it’s a real rigmarole.”

There was also the ethical concern that the volunteers might experience a so-called bad trip. Although psilocybin is generally associated with feelings of euphoria and human connectedness, it can sometimes cause anxiety. Should this have happened, Nutt explained, the person would have been kept safe, calmed down, and if necessary, given Valium. To lessen the chance of a bad experience, all 30 volunteers were chosen on the basis that they had taken hallucinogens at least once before and so would know what to expect.

It was worth all the effort, said Nutt. Psychedelics offer not only insight into the biology of human perception and cognition, but may also be of therapeutic use. And, as it happened, he added, “they all had a good experience—some had very good experiences, some had experiences they said were very meaningful and altered the way they thought about life.”

Nutt and his team administered psilocybin to the volunteers by a slow—one minute long—injection while their brains were scanned by functional magnetic resonance imaging (fMRI). “We wanted to know exactly what happens when you make that transition from the normal state to the psychedelic state,” he explained.

The first 15 volunteers had their brains scanned by arterial spin labeling (ASL), an fMRI technique that examines blood flow. After seeing widespread decreases in flow, the researchers were so surprised they scanned a further 15 volunteers by blood-oxygen level dependent (BOLD) fMRI, which more directly measures metabolism. Both gave strikingly similar results.

Brain blood flow and activity were particularly decreased in the medial prefrontal cortex—a region involved in emotions, learning, memory, and executive function—and the posterior cingulate cortex, the function of which is less clear.

The team also used the fMRI data to look at functional connectivity between these two regions over time, and found that their deactivation was linked. “Assessing circuitry in terms of connectivity is a more sophisticated and informative approach to understanding function, so I think that is the real strength of their work,” said Mark Geyer of the University of San Diego, California, who did not participate in the study.

The two regions are connected by the default mode network (DMN), which integrates brain functions including sensations, memories, and ambitions. “It’s kind of who you are and how you see the world,” said Nutt. The DMN might also act as a cognitive constraining mechanism—to filter and make sense of information. Reduced DMN activity, therefore, might enable an unconstrained mode of cognition, such as that experienced on a magic mushroom trip.

Interestingly, DMN activity is hyperactive in people with depression, suggesting that psilocybin may be effective as a depression treatment.

Taking a hallucinogen to deal with depression might not appeal to everyone. But for those willing to give it a try, the hope is that the need for all medication might be reduced or even eradicated. “Psilocybin would only be given a few times under supervision of a therapist…with the hope that at the end of the process you are no longer dependent on a daily medication,” explained Doblin. “It would be like opening a door and showing them that there is another way of being,” said Nutt.

R.L. Carhart-Harris et al., “Neural correlates of the psychedelic state as determined by fMRI studies with psilocybin,” Proceedings of the National Academy of Sciences, doi/10.1073/pnas.1119598109, 2012.