Since early August, the Indian government has imposed a communication blackout on the erstwhile state of Jammu and Kashmir, slashing telephone, cellular, internet, and television connectivity. The move, a precautionary measure to mitigate any unrest following recent political changes in the region, has left residents cut off from the rest of the world—and scientists unable to do their work.

“Research has come to a standstill,” says one Kashmiri scientist, who declined to be named, fearing government retaliation.

Following a landslide victory in the general elections in India earlier this year, the Bharatiya Janata Party (BJP) took the contentious step to dissolve Jammu and Kashmir (J&K)’s statehood by presidential ordinance on August 5, 2019. It was made up of three provinces: Jammu, which has a majority Hindu population; the Kashmir valley with a majority Muslim population; and Ladakh, inhabited mostly by Buddhists. Since India’s independence, J&K had been accorded a special autonomy that was always a bone of contention between India and Pakistan, which claims the territory as its own. Last month’s dissolution of J&K split the state into two new union territories, called J&K and Ladakh, which were put under the purview of New Delhi.

Expensive and delicate equipment that needs maintenance is now collecting dust in labs. Cell cultures have been neglected.

Fearing a backlash, the government deployed additional troops and imposed a curfew in the troubled territory. A communication clampdown implemented late in the night on August 4 cut off landlines, mobile networks, internet, and television access to prevent the spread of false and injurious news, which could incite violence.

The current lockdown has not only made life harder for Kashmiris, but has led to considerable damage to the scientific community, researchers tell The Scientist. “I tried to contact my good friends who are scientists at the University of Kashmir in Srinagar [in J&K] but could not due to the blockade,” says Lingadahalli Subrahmanya Shashidhara, a biologist at the Indian Institute of Science Education and Research in Pune. “Before the shutdown, we regularly exchanged ideas for improving the quality of science in J&K. We would also discuss the varied types of science they can do, such as biodiversity projects, given their unique geography.” The state is known for its pristine beauty and exotic flora and fauna.

There are two central universities—the University of Kashmir and the University of Jammu—and nine state universities in J&K, which include medical colleges, technological centers, and research institutes, that are affected by the now almost two-month-long blackout. “It is very difficult for academic people to stay current if they are cut off from the world,” says Balasubramanian Ananthanarayan, a physicist at the Indian Institute of Science in Bangalore, says. 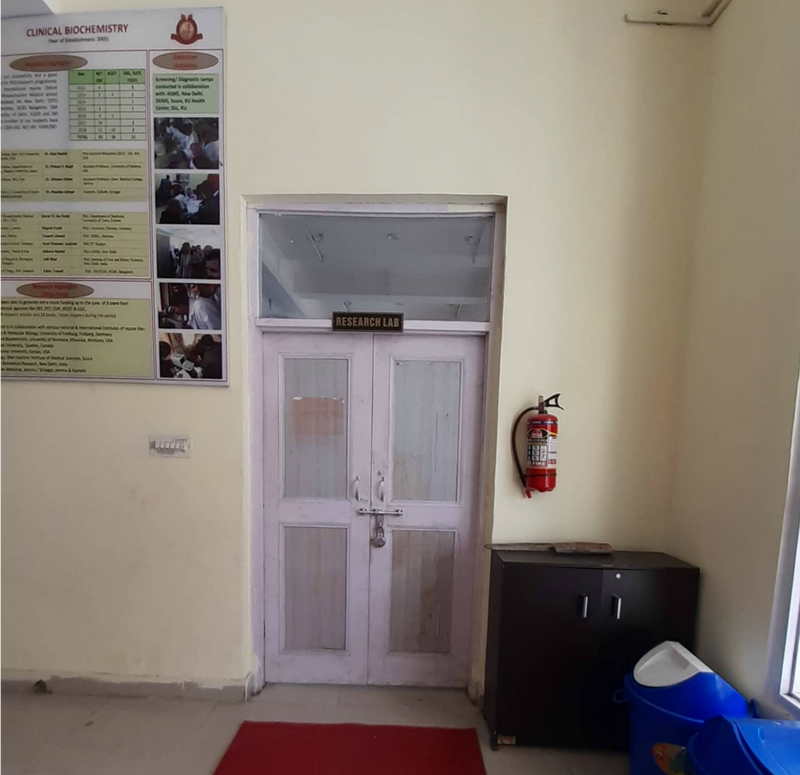 A locked research laboratory at the University of Kashmir
jkscientists

For instance, the simple task of accessing the literature has been rendered impossible because of the internet outage. Kashmiri researchers also can’t submit their papers to journals. (In 2011, the United Nations declared that denying people internet access is a violation of human rights and flouts international law.)

Many scientists have left the valley temporarily for locations where there is connectivity so that they can check and send emails to their collaborators both in India and abroad. But as Mubarak Hussain Syed, a neuroscientist at the University of New Mexico who runs an organization called JKScientists that promotes science in the region, puts it, “Their labs are in Kashmir.” At the end of the day, this will affect their productivity.

On September 21, a group of 504 scientists and academics from leading institutes inside and outside India launched an online petition, now numbering 610 signatories, asking the government to immediately restore full communication in J&K and lift the restrictions imposed on Kashmiris. Separately, six senior Indian scientists signed a petition published in The Hindu three days earlier also asking the government to lift the telecommunications ban in J&K. One of these scientists, Jayant Murthy, the acting director of the Indian Institute of Astrophysics in Bangalore, tells The Scientist that he next plans to write to the University Grants Commission, a body that oversees higher education in India. “If the government is planning to open up the state in stages, they could start with the academia as all they want to do is work,” he says.

With limited resources, Kashmiri scientists have been largely dependent on largesse from scientists in other parts of the country in the form of research materials. They often send samples for X-ray diffraction and other techniques to institutes of higher learning in New Delhi. As there is now no way to communicate, this external help is cut off.

The internet shutdown has put on hold outreach and online activities, such as JKScientists’s  “Scientist Online,” which allows students and researchers in J&K to interact with STEM scientists anywhere in the world over Skype, and the SPROUT mentorship program, an initiative to mentor students and scientists in J&K at different stages of their careers.

Rukhsan Ul Haq, a Kashimiri scientist who heads KIMS, a group built to encourage a culture of research in Kashmir, tells The Scientist, “We were going to organize our first workshop in Srinagar in the third week of August, but everything got disrupted. We were in the process of launching our website; that got cancelled as well.”

A closed gate at the University of Kashmir
jkscientists

Students are also feeling the effects of the political turmoil. A researcher who asked not to be named says that his cousin, a biochemistry PhD student in Srinagar, has not been going to the university as it is now deserted. All her experiments have been thrown into disarray, he tells The Scientist. Expensive and delicate equipment that needs maintenance is now collecting dust in labs. Cell cultures have been neglected. “Her PhD will consequently be unduly prolonged,” he says.

There are numerous other accounts of vacant universities in J&K where students have stopped attending classes. “A niece, who prepared for a year to get into a biotechnology course, and had just started attending university on August 4, is now sitting at home as the university is closed,” Syed tells The Scientist. He reckons it will take months to get back on track.

Online applications for admission to national and international graduate courses and fellowships are impossible. “Many researchers in J&K who have been trained abroad and have won prestigious fellowships, like the Wellcome Trust/DBT India Alliance fellowships, have been completely locked out, along with others,” says Reeteka Sud, the coordinator for the core lab facility at the National Institute of Mental Health and Neuro Sciences (NIMHANS) in Bangalore. She adds that the setback is mentally devastating.

The current crisis has also affected Kashmiri scientists outside J&K who are unable to reach their loved ones. Although official reports say that landlines have been restored in phases since August 16, most of the locals use mobile phones as landlines reach less than 1 percent of inhabitants in J&K. “Our village has no landlines,” says Syed in New Mexico. He has been distressed for more than 40 days as he is not able to contact his family including his elderly mother. “I had to submit a grant but cannot focus on my work,” he laments.

Scientists outside J&K, both in India and abroad, have been chipping in monetarily and otherwise. Shashidhara has stepped in to help several students who had missed their deadlines for joining universities in India and abroad. For instance, he wrote to the Indian Veterinary Research Institute and helped a student, who could not contact the authorities, gain admission. “The institutes are also very cooperative,” he says. JKScientists has provided monetary assistance to more than 600 students from J&K studying in other parts of India who have been cut off from their families and friends.

In spite of these seemingly insurmountable odds, the determination of Kashmiri scientists endures. A scientist who prefers to remain anonymous says, “We Kashmiris are all very ambitious. We are not going to be bogged down by anything.”

Alakananda Dasgupta is a freelance science journalist and physician based in New Delhi, India. Follow her on Twitter @AlakanandaDasg1 or email her at alakanandadasgupta@gmail.com.