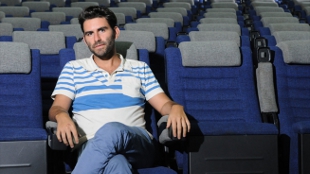 Alexis Gambis wants to show the world of science as he sees it.IMAGE BY: CARLOS FUGUETBy now, Alexis Gambis has grown accustomed to the idea of life between two worlds. He spent his childhood ping-ponging between Paris and New York, first for his parents’ education, then his own. “I'm kind of from nowhere,” he says. Currently he traverses the intersection of science and art, a rare combination of both biologist and filmmaker whose works are an original mix of vision and thematic content.

Gambis says he started working in film as something to help him “get through” his Ph.D. research in molecular biology at Rockefeller University in New York City. But it has now become much more. As a grad student Gambis felt increasingly dissatisfied with the stereotypical depictions of scientists in film—too often portrayed as isolated outcasts conducting farfetched and dangerous experiments. So he started making his...

Gambis bounces between the worlds of film and science. He has directed James Franco and Mila Kunis, Spike Lee is his thesis advisor. His films are heavily focused on stories and characters, but not at the expense of bringing real science to the screen. Along with using visual aids to help explain the scientific details, he says that he strives to show researchers as complete humans, rather than as deranged individuals, isolated from the rest of society.

Gambis is rerouting his career to filmmaking, but it’s not for a lack of successes in the lab. Under the tutelage of Rockefeller molecular biologist Hermann Steller, Gambis studied how cells are programmed to die, a process that can be either helpful or harmful in different diseases. In cancer, for example, programmed cell death can prevent the spread of tumors, while in Alzheimer’s and other neurodegenerative diseases, the effect is devastating. Gambis’s research focused on the degeneration of nerve cells in the retinas of fruit flies. “Alexis made some very nice discoveries,” Steller says.

For his dissertation, which was featured on the cover of Developmental Biology, Gambis developed an imaging system to visualize nerve cells, allowing him to track their death in living flies and determine which genes were responsible for it. The significance of working on the visual system of the fly, in a visual way, was not lost on Gambis. “In a weird way, it's what got me interested in film,” he says.

But Gambis might also attribute his gravitation to filmmaking to familial influence. His father is a French engineer-turned-painter and his mother is a Venezuelan filmmaker who studied at New York University in the '80s alongside Spike Lee. And as an undergraduate, Gambis studied both film and biology at Bard College in Upstate New York. At the time, he thought he didn't have much to say. That changed when he began his doctorate. “That's when everything that was dormant came back,” he says.

As with all creative endeavors, making films while a science grad student was not easy. Gambis says that Steller was supportive and never criticized or discouraged him (and even lent him lab space to film in). Other scientists, he says, were not so supportive. “They were not exactly understanding when I said I wanted to do film.”

But Gambis does not see a conflict in his decision to pursue a career in filmmaking with science as his muse: “I've never thought about what I did as me leaving.”

Ever ambitious, Gambis has decided to make a feature film for his Master’s thesis, rather than a short film as most students do.

His thesis film, “The Fly Room,” is about Columbia University geneticist Calvin Bridges, who worked under renowned geneticist Thomas Hunt Morgan at Columbia on Drosophila. Bridges’s work was intimately linked to reproduction and aspects of sex and played an important role in developing modern genetics. A different kind of sex was on his mind outside the lab. According to Gambis—who interviewed Bridges’s daughter Betsey extensively for the film—the geneticist was also a womanizer, had an affair with someone in his lab, started a brothel, and eventually died of syphilis.

The film, chronicling a visit Betsey made to the fly room as a young girl, is about discoveries, Gambis says: about science, about sexuality, and about identity. “My films are very much about how the work that scientists do is intimately linked to their daily lives,” he says.

The Imagine Science Film Festival, which will celebrate its sixth annual installment this October, has been instrumental in advancing his vision. “He's given this kind of interdisciplinary work a home it never had before,” says Noah Hutton, a filmmaker with an undergraduate degree in neuroscience. “That's remarkable. That's a forward thinking move he made.”

Gambis‘s latest project is a video blog series entitled “My Mind's Eye,” starring New York University neuroscientist Joseph LeDoux. The filmmaker describes it as a conversation between LeDoux and leading neuroscientists, in the vein of independent filmmaker Jim Jarmusch's collection of narrative vignettes, “Coffee and Cigarettes.”

Gambis’s many commitments—the film festival, his thesis, numerous projects and speaking engagements around the world—sometimes make him seem like a fleeting ghost to those who know him. He was recently in Venezuela shooting a film with his mother, before jetting off to Abu Dhabi, to give a lecture.

“Sometimes I worry he's doing too many things to finish our project,” says LeDoux. “But he doesn't put out stuff of poor quality, so even if it takes longer, I know it will be good.”