Microbes extracted from deep sea sediments that settled during the age of the dinosaurs have been revived in the lab after eons spent in a dormant state. Despite needing oxygen to survive, the bacteria were able to make do with only trace amounts and almost no food for more than 100 million years. Once reanimated, most of the microbes were able to feed and multiply with seemingly no ill effects attributed to their long period of rest.

“The most exciting part of this study is that it basically shows that there is no limit to life in the old sediments of Earth’s oceans,” Steven D’Hondt, an oceanographer at the University of Rhode Island and a coauthor of the study, tells Reuters. “Maintaining full physiological capability for 100 million years in starving isolation is an impressive feat.”The endeavor, described Tuesday (July 28) in Nature Communications, shows just how little is known about the physiological limits of life on Earth, the authors report.

Researchers have long looked to the Earth’s most extreme corners to study the limits of life, including the deep sea, and lead author Yuki Morono, a geomicrobiologist at the Japan Agency for Marine-Earth Science and Technology, wanted to know just how high a tolerance bacteria have for conditions that would prove fatal for other organisms.

Morono collected sediment cores during a research cruise in 2010 aboard the JOIDES Resolution, a floating lab that operates 24 hours a day during scientific voyages. The team targeted the South Pacific Gyre off the east coast of Australia, often called an ocean desert because it lacks the nutrients needed to support even most plankton. As a result, very little organic matter falls to the seafloor more than three miles below.

Across the length of the roughly 250-foot cores, the team collected samples of clay spanning a deposition period between 13 million years ago and almost 102 million years ago. With the samples in the lab, they added nutrients such as nitrogen and carbon—food to jump start any life inside. For up to 557 days after, Morono would extract small chunks of sediment and dissolve them in water, searching for living cells. While a sample of sediment taken from a more oxygen-rich layer of the sea floor might contain more than 100,000 cells per cubic centimetre of mud, Science reports, these deep sea samples might initially only have 1,000 cells in that same volume.

Over time, the microbes began to multiply, a finding Morono initially attributed to “some mistake or a failure in the experiment,” he tells The Guardian. They ruled out contamination from other sources of seawater in the lab, ultimately confirming that what they were seeing was real. In many samples, as many as 99 percent of the microbes were revived. After 68 days, the total number of cells had increased by four orders of magnitude, up to 1 million cells per cubic centimetre. 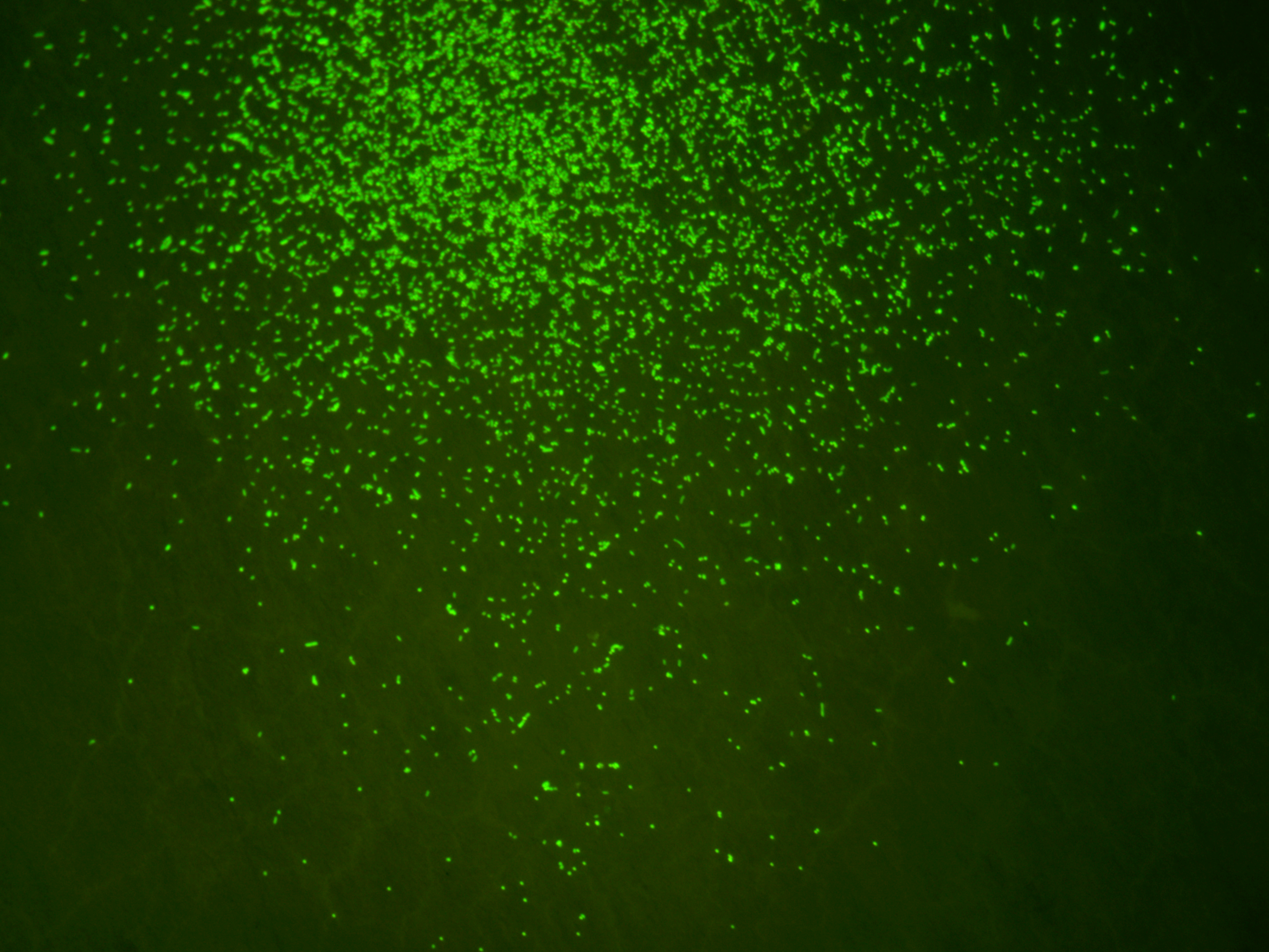 These bacteria, glowing green in this microscopy image, were revived from deep sea sediment more than 100 million years old.
JAMSTEC

A genetic analysis showed that the microbes were fairly diverse, representing 10 major groups of bacteria, some of which are widespread throughout other parts of the ocean. Kenneth Nealson, an environmental microbiologist retired from the University of Southern California who was not involved in the study, tells Science this finding “suggests that learning to survive under conditions of extreme energy limitation is a widespread ability,” a useful trick for microbes when food is scarce.

The relatively slow accumulation of sediments in the South Pacific Gyre ended up being key to the cells’ survival, The Guardian reports. When sediment builds up quickly, the pressure pushes out any oxygen that might otherwise linger between the grains to keep aerobic microbes alive. The authors report that if sediment accumulates at a rate of no more than three to six feet every 1 million years, it can remain oxygenated enough to support bacteria.

Some researchers are now pointing to what these findings might mean for the search for life on other planets, as they broaden what environments can be considered amenable to life. Speaking to Science, Andreas Teske, a microbiologist at the University of North Carolina, Chapel Hill, who was also not involved with the new study, says that even if a planet’s surface looks barren, “it may be holding out in the subsurface.”