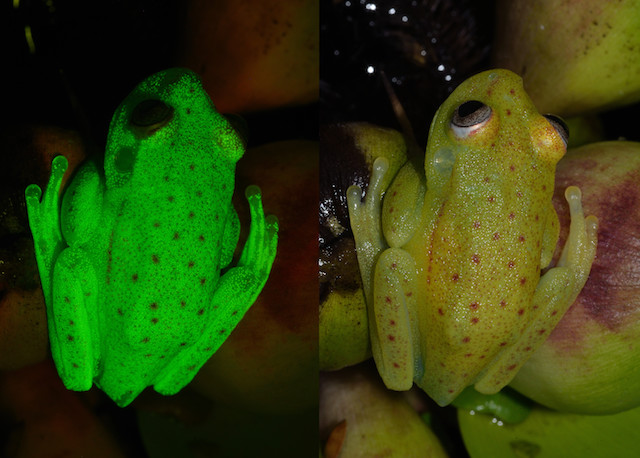 When researchers placed a polka dot tree frog (Hypsiboas punctatus) under a black light, they made an unexpected discovery. The amphibian glowed with a bright, green-blue hue, the scientists reported Monday (March 13) in PNAS.

Fluorescence exists elsewhere in the animal kingdom, in some fish, sharks, and scorpions, for example. However, this is the first amphibian scientists have discovered with this trait. “We couldn’t believe it,” study co-author Julián Faivovich, a herpetologist at the University of Buenos Aires, told Nature.

Polka dog frogs contain biliverdin, a pigment found in some insects that gives them a dim red fluorescence, coauthor Carlos Taboada, a University of Buenos Aires herpetologist, told Nature. So the team expected the frogs to glow red under a UV flashlight, but instead, they emitted a brilliant, green-blue glow. The team also discovered that the fluorescence originated from...

“It would be interesting to investigate if [fluorescence] has a role in species recognition, or whether it facilitates the formation of couples,” Bibiana Rojas, an ecologist at the University of Jyväskylä, Finland, who was not involved in the work, told Chemistry World. “Fluorescence would be potentially very useful in a noisy environment and in a habitat with dense foliage, as it would make individuals brighter.”

It’s possible that other frog species are fluorescent, too. “Maybe we should be looking at every species we catch and trying to see if they fluoresce,” David Blackburn at the University of Florida who was not involved in the study, told New Scientist. “There’s very few frogs that have a feature that’s not found in any other frogs.”