Cells infected with herpes simplex virus (green) were treated with either control vehicle (left), or the EZH2/1 inhibitor GSK126 (right).

When a virus invades a host cell, it needs to do some remodeling to make the environment safe for itself. In recent years, researchers have teased out how certain viruses—particularly, HIV and herpes simplex virus (HSV)—manipulate hosts’ epigenomes, and thus gene expression, to inhabit their cellular homes. Ultimately, they’d like to follow the cancer field's lead by developing epigenetics-based drugs against such diseases.

Recently, Thomas Kristie’s lab at the National Institute for Allergy and Infectious Disease set out to see what could be done epigenetically about HSV. The virus’s effects can range from cold sores to (in newborns) death, and once the pathogen infects someone, it can remain dormant indefinitely in their sensory neurons, with the potential to flare up down the road. Available...

The enzymes EZH2 and EZH1, made by the host, are known to help keep the virus latent by adding methyl groups to specific spots on proteins known as histones that package DNA into chromatin. If those enzymes were inhibited, Kristie’s group reasoned, the chromatin would likely open up, allowing the latent viral DNA to be expressed and the virus to become active again.

But when the researchers treated HSV-infected human cells, and then mice, with inhibitors of EZH2/1, they found “the exact opposite” of increased viral activity, Kristie says. Instead, “we got suppression of viral gene expression.”

On further investigation, his group found that inhibitors of EZH2 and EZH1 initially enhanced the expression of viral genes, but they also ramped up the activity of interferons and other immune-related proteins in the host. The resulting inflammatory response boosted the cells’ ability to combat not only HSV, but also cytomegalovirus, adenovirus, and Zika, the researchers report in mBio on August 15.

“This was a surprising result,” says David Bloom, a virologist at the University of Florida—one with potential implications for developing new drugs. “For Zika virus or even some viruses that come on the scene, like the coronaviruses and SARS, that you don’t have drugs for yet, if you have something that’s a broadly acting antiviral that’s reasonably safe for short-term use, then that would be huge weapon in the arsenal against viruses.”

There’s potentially more than one way to deal with stuborn viruses like HSV using epigenetic drugs. While no epigenetics-based antivirals are yet on the market, clinical trials are underway to test the use of chromatin-opening cancer drugs in combination with conventional antiretroviral therapies for HIV, and researchers such as Kristie and Bloom are working to better understand how viruses take advantage of hosts’ epigenomes—and how they might be stopped.

The potential for manipulating the latent virus to flush it out of hiding makes epigenetic drugs an appealing strategy for researchers looking for a functional cure for HIV, says virologist Melanie Ott of the Gladstone Institutes. Current antiretroviral therapies effectively control the infection, but if patients go off the drugs, the vast majority will experience a resurgence of infection due to reservoirs of latent virus in the body.

One popular idea to treat latent HIV, known as shock and kill, is to use an epigenetic drug to lure the virus out of latency so that it can be killed off by a combination of drugs and the patient’s own immune system. Ott says that realistically, therapies would be unlikely to reach every cell harboring latent virus, but that perhaps this strategy could shrink viral reservoirs enough to be controlled by the immune system without the need for further treatment.

To that end, studies have explored repurposing cancer drugs called histone deacetylase inhibitors to loosen heterochromatin and restart HIV gene expression, but so far the drugs have not proven as effective as hoped, Ott says. In addition to studying histone-modifying machinery that affects HIV latency, her lab is also exploring how similar enzymes modify the viral transcription-activating protein Tat. The advantage of developing a therapy targeting Tat is that it would be more specific, and therefore potentially safer, than an epigenetic drug with widespread effects on the host genome, she notes. 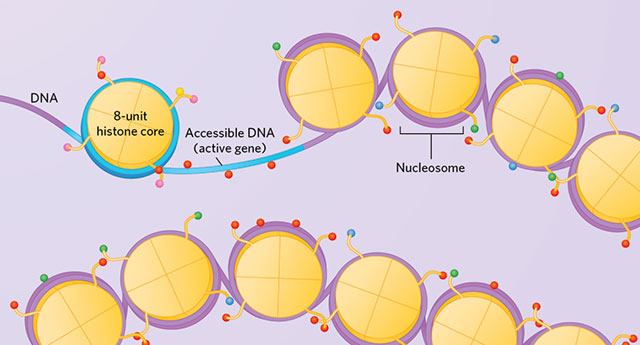 Chemical modifications of DNA (methylation and hydroxymethylation) or of histone tails (methylation, acetylation, phosphorylation) contribute to the regulation of gene expression.THE SCIENTIST STAFFThe shock-and-kill approach to handling latent viruses is one side to the epigenetic antiviral coin. The other is to hold them down in latency indefinitely.

“One of the nice things about the epigenetic modifiers with respect to these viral systems is you can push them in one direction or the other,” toward activation or permanent latency, notes Jonathan Karn, a molecular biologist at Case Western Reserve University. His lab has used inhibitors of demethylases to do the latter in as-yet-unpublished work with HIV, he says.

For either tack, chromatin will likely be key. Bloom’s lab was the first to report, in 2004, that the latent HSV genome is kept under wraps not by DNA methylation, as some had thought, but by acetylation of chromatin’s histone proteins. More recently, he and others found that inhibitors of histone demethylases can prevent latent HSV from reactivating.

It turns out that some viruses, including influenza, don’t stop at modifying histone proteins to do their bidding. They can also employ histone mimicry, making viral proteins that replace part of the host’s own epigenetic machinery in order to, for example, silence genes that could mount an inflammatory response.

The phenomenon was first reported by Alexander Tarakhovsky of Rockefeller University and colleagues in 2012, and he says the discovery opens up new avenues for pharmacological exploration, including interfering with the mimic proteins to throw a wrench in the infection process. These imposter histones are one possible explanation for the long-lasting effects of transient infections with some viruses, he says, where the initial infection is usually asympomatic but symptoms can flare up later in immunocompromised people.

Not all viruses use histone mimicry, and not all integrate their DNA into the host’s, so it’s unlikely a universal epigenetic antiviral drug is on the horizon. Still, Karn says, “if the virus has a DNA stage, it’s going to be in some ways impacted by the cellular chromatin machinery. And very many of the viruses are actually exploiting that for their own regulatory purposes. So I would think that some of these approaches with either reactivating or silencing viruses with epigenetic modifiers would be applicable to many other viruses, and that’s kind of an exciting prospect for the field.”

Correction (September 2): The original version of this article misidentified Melanie Ott's primary affiliation. The mistake has been corrected, and The Scientist regrets the error.