Stephenie Livingston is a freelance science journalist based in Florida. She writes about science and the environment for various publications, including Hakai Magazine and Scientific American. 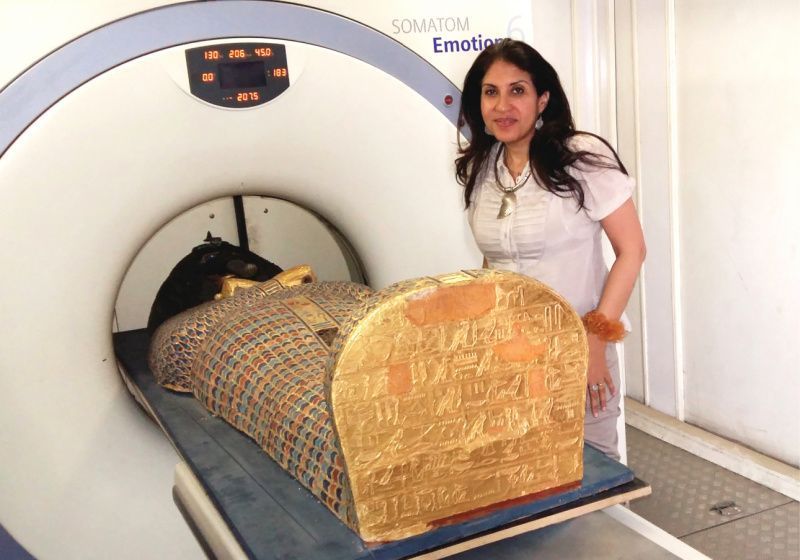 Since the mummy of pharaoh Seqenenre Taa II, who ruled over southern Egypt in the 16th century BCE, was found in the 1880s, researchers have debated the circumstances of his obvious murder. Visible to the naked eye, the king’s crushed facial bones, punctured skull, and contorted hands tell a grisly but incomplete story. Was he the victim of a palace conspiracy? Did he die as a prisoner of enemy invaders?

Now, a forensic investigation has combined CT scans used to reconstruct in three dimensions the king’s bones and soft tissues with an analysis of archaeological artifacts and historical accounts to sort through theories surrounding the king’s death and provide a more detailed understanding of his final moments.

The researchers suggest that Seqenenre was most likely captured in battle against the Hyksos, an Asian dynasty that occupied Egypt at the time, then bludgeoned to death while his hands were bound behind his back. They published their study today (February 17) in Frontiers in Medicine.

“It rewrites an important chapter in Egypt’s history,” lead author Sahar Saleem writes in an email to The Scientist. Details revealed during the analysis show Seqenenre’s death could have been an important turning point in Egyptian history. They suggest he died as the result of fighting to liberate his kingdom, rather than in a scandalous way, such as a palace conspiracy, which researchers had proposed previously. The nature of his capture and violent death as described in the new study may have motivated his successors to drive out the invaders and reunite Egypt under the New Kingdom pharaohs, an era of unity between the 16th century and 11th century BCE, suggests Saleem and her coauthor, Zahi Hawass, an independent archaeologist who previously directed antiquities for the Egyptian government.

Seqenenre is the latest in a series of famous mummies to analyzed using a computerized tomography (CT) scan. His case could serve as “a model for forensic imaging in trauma victims,” says Saleem, a professor of radiology at Cairo University who specializes in paleoradiology. This isn’t her first murder investigation. In 2012, her scans of pharaoh Ramses III revealed he had a slit throat, perhaps ordered by his own son Pentawere.

In the latest study, the researchers matched Seqenenre’s injuries to five weapons used by the Hyksos, including a spearhead, battle-ax, and daggers. They argue the number of murder weapons and position of the wounds suggest multiple assailants unleashed violent blows on the king.

“This highlights the importance of doing analysis of human remains in the context of archaeological artifacts. If you can place individuals back into their cultural context, that’s really useful,” says Sara Juengst, a bioarchaeologist at the University of North Carolina at Charlotte who studies ancient skeletal trauma and violent conflicts and was not involved in this work. While the scenario put forth by the authors makes sense, Juengst says, she isn’t convinced a single assailant could not have carried out the attack.

Based on their analysis, the authors suggest Seqenenre knelt in front of his enemies when the first blow struck his forehead, knocking him onto his back. Scans show no sign of defensive wounds to his arms, evidence his hands were tied behind his back.

He was defenseless as more blows to his face followed, crushing his nose and right eye, before a spear pierced the base of his skull. Seqenenre was probably dead at this point but the blows kept coming, the authors write. His bound hands experienced cadaveric spasm, they suggest, a condition found in some trauma victims that causes premature stiffening of a corpse. He was then left on his side after death long enough for decomposition to start—perhaps on the battlefield or while being transported for funeral preparations. Scans show his brain shifted to the left side.

A surprising find revealed by the scans, says Saleem, were lesions on one side of his head. These were previously undetected by X-ray, demonstrating that embalmers expertly concealed the wounds, possibly inflicted by a Hyksos dagger, using a filler material.

“I think that was in keeping with the level of embalming involved with someone of his stature, that they would’ve tried to make him look as life-like as possible and conceal some of that damage,” says Brenda Baker, a bioarchaeologist at Arizona State University who studies ancient Egypt.

The study of mummified remains, from Egypt’s famous pharaohs to the Inca’s ice mummies, involve unique ethical concerns, says Juengst. “The opportunities that CT presents are pretty cool in the sense that you can do a really detailed analysis without doing any destructive analysis.”

In places like rural Bolivia where she’s worked, access to CT scanners is limited or nonexistent. “If (this study) could promote more collaboration between doctors and archaeologists,” to improve access to medical CT scanners in places experiencing disparities in technology, “that would be amazing.”