ABOVE: As the rate of tick-borne diseases rises, vaccines that stop ticks in their tracks could be an essential preventive tool. © ISTOCK.COM, LADISLAV KUBEŠ

A new laboratory-stage mRNA vaccine that teaches the immune system to recognize the saliva from tick bites could prevent these bugs from feeding on and transmitting tick-borne diseases to people, according to a recent study my colleagues and I conducted in the Fikrig Lab at the Yale School of Medicine.

Some animals repeatedly exposed to tick bites are eventually able to develop resistance to tick feeding, where the ticks either detach soon after biting or cause skin redness that alerts the host to remove them. Scientists have observed this tick immunity in several animals that don’t typically serve as hosts to ticks, including guinea pigs, rabbits and cows.

In laboratory settings, guinea pigs bitten 2-3 times by ticks are able to develop robust immunity against them. While there have not been any formal studies on tick immunity in humans, people who have been repeatedly exposed to ticks can get itchy skin after getting bitten, a symptom that may be associated with tick immunity.

Lyme disease, a tick-borne illness that can cause long-term problems in some who catch it, is a growing health threat.

Unfortunately, no vaccine is available — yet https://t.co/MAPcNK8Rar

Our lab was curious if we could induce tick immunity without tick bites. So we developed an mRNA vaccine called 19ISP that teaches cells to recognize 19 selected proteins present in the spit that Ixodes scapularis, also known as the deer or black-legged tick, leaves on the skin during a bite. Instead of targeting proteins on the invading pathogen—like the spikes on the outside of the coronavirus—our vaccine targets proteins naturally found in the tick’s saliva.

We found that guinea pigs vaccinated with 19ISP developed skin redness after they were bitten, indicating that their immune system was activated and recruited inflammatory cells to the site to fight off infection. Like other animals that developed tick immunity after repeated bites, the ticks were unable to feed on the guinea pigs and quickly detached. None of the vaccinated guinea pigs tested positive for Borrelia burgdorferi, the bacteria that causes Lyme disease. Conversely, almost half of the non-vaccinated guinea pigs tested positive for Borrelia infection.

Tick-borne diseases, including Lyme disease, are rising in North America and Europe, with almost 40,000 annual reported cases in the U.S. Ticks aren’t just a cause of trouble for wilderness hikers—they also pose a danger to farm workers and anyone outdoors. Beyond Lyme disease, ticks also transmit several other pathogens that can cause serious and potentially life-threatening conditions. 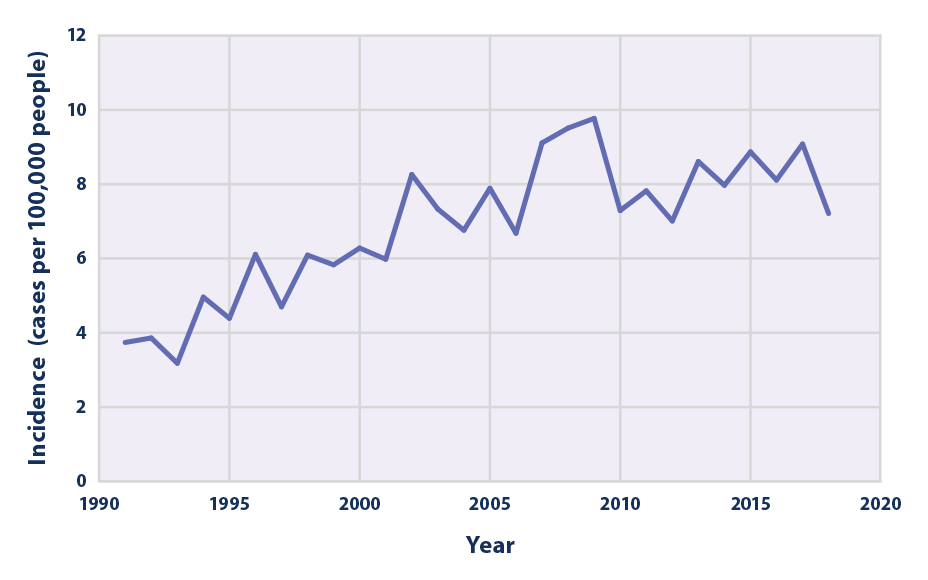 Tick ranges have increased with climate change, putting more people and animals at risk for tick-borne diseases. The graph above shows the annual incidence of Lyme disease in the US based on cases that local and state health departments report to Centers for Disease Control (CDC).
US Environmental Protection Agency

See “Diseases From Ticks and Mosquitoes Have Tripled”

What’s unique about the 19ISP mRNA vaccine is that instead of directly targeting the pathogen that causes the disease like traditional vaccines, 19ISP was able to stimulate resistance to the carrier of the disease, ticks, and prevent them from transmitting the pathogen in the first place. Our study also suggests that this form of tick-based vaccination—teaching the body to rapidly recognize and react to being bitten by a tick—may be sufficient to prevent infection.

While guinea pigs were able to develop tick immunity, we’ve found that animals like mice do not. We plan to test this mRNA vaccine model in other animals, such as rabbits, to better understand how tick immunity varies in different tick hosts. We also plan to develop vaccines for other tick-borne pathogens and test for whether immunity extends to different tick species as well.

Our hope is that vector-based mRNA vaccines targeting the disease carrier can be applied to other vector-borne diseases. However, the feeding strategies of each disease vector is different—tick bites are not the same as mosquito bites, for instance. Because the way disease-carriers transmit pathogens may be different, vaccines may need to be modified for each vector.

We plan on conducting studies on people who already have Lyme disease or who are repeatedly exposed to ticks to see if they have developed antibodies that recognize the proteins in 19ISP. This will further clarify how tick immunity works, and may eventually lead to clinical trials testing these vaccines in people.

Andaleeb Sajid is a staff scientist with the National Institutes of Health.