In an open letter published today (July 6), 239 scientists from 32 countries urge the World Health Organization and other bodies to address the potential for airborne transmission of the coronavirus. The authors write that a growing body of evidence suggests “beyond any reasonable doubt” that the virus spreads indoors through tiny aerosols—a finding that should be reflected in the WHO’s recommendations.

The perceived distinction between respiratory droplets and aerosols dates back to experiments carried out in the 1930s. WF Wells, a sanitary scientist at the Harvard School of Public Health, suggested that coughs and sneezes produce two types of droplets: large droplets that fall quickly to the floor under their own weight, and smaller aerosolized droplets capable of circulating in the air for long periods of time.

As The New York Times notes, if airborne transmission is a significant factor in the COVID-19 pandemic, this would have significant implications for containment efforts, which might require such measures as greater use of N95 masks among healthcare workers and modifications to ventilation systems. However, the WHO maintains that SARS-CoV-2 primarily leaves the body in the larger droplets, which then settle onto nearby surfaces. For this reason, the WHO has emphasized hand-washing even as the US Centers for Disease Control and Prevention now downplays the likelihood of picking up the virus from contaminated surfaces. Similarly, the WHO lagged behind its member nations in promoting mask-wearing for members of the public.

Benedetta Allegranzi, the WHO’s technical lead on infection control, tells the Times that the evidence for the virus spreading by air remains unconvincing. “Especially in the last couple of months, we have been stating several times that we consider airborne transmission as possible but certainly not supported by solid or even clear evidence,” she says.

The letter, published in the journal Clinical Infectious Diseases, comes after a series of outbreaks that cannot be explained through surface-based infection alone. Circulating air was implicated when 1,500 staff fell ill at a German slaughterhouse, and a superspreader event was linked to a single person who infected 52 fellow choir members. In that case, the Times reports, the act of singing may have generated the tiny aerosols necessary to spread the virus around the room.

So far, scientists have been unable to consistently culture viral particles pulled from the air, but that doesn’t necessarily mean that viruses in aerosols are incapable of causing infection. Donald Milton, a professor of environmental health at the University of Maryland, tells The Washington Post that while it’s relatively easy to find viruses on surfaces, identifying and culturing airborne viruses remains “a major technical challenge.”

See “Droplets from Speech Can Float in Air for Eight Minutes: Study”

Some critics see WHO’s stance on airborne transmission as symptomatic of a larger problem with the speed at which it weighs new evidence and incorporates it into recommendations. “WHO’s credibility is being undermined through a steady drip-drip of confusing messages, including asymptomatic spread, the use of masks, and now airborne transmission,” Lawrence Gostin, a professor of global health law at Georgetown University who has previously advised the organization, tells the Post. “The public, and even scientists, will lose full confidence in WHO without clearer technical guidance.”

The authors of the open letter call on the medical community and relevant national and international bodies to acknowledge the role of airborne transmission in spreading COVID-19 and take appropriate preventative measures.

Trish Greenhalgh, a professor of primary healthcare at the University of Oxford, echoes calls in the letter to adopt what is known as a “needs and values” approach, also known as the precautionary principle, to account for the fluidity of knowledge around the pandemic. With this approach, organizations assume a worst-case scenario, and draw from common sense practices to recommend protective measures accordingly.

“There is no incontrovertible proof that SARS-CoV-2 travels or is transmitted significantly by aerosols, but there is absolutely no evidence that it’s not,” Greenhalgh tells the Times. “At the moment we have to make a decision in the face of uncertainty, and my goodness, it’s going to be a disastrous decision if we get it wrong. Why not just mask up for a few weeks, just in case?”

But the needs and values approach can place an undue burden on smaller hospitals or on lower-income countries, which would be forced under revised guidelines to redirect already-strained resources—toward greater use of N95 masks, for example—in the absence of absolute proof.

“That’s the balance that an organization like the WHO has to achieve,” Paul Hunter, a member of the WHO’s infection prevention committee, tells the Times. “It’s the easiest thing in the world to say, ‘We’ve got to follow the precautionary principle,’ and ignore the opportunity costs of that.”

Chief WHO scientist Soumya Swaminathan tells the Times her staff members are working tirelessly to evaluate new scientific evidence as fast as possible. And even among the WHO’s critics, many have praised the organization’s willingness to continue to field questions related to the pandemic during daily press briefings. “We take it seriously when journalists or scientists or anyone challenges us and say we can do better than this,” Swaminathan says. “We definitely want to do better.” 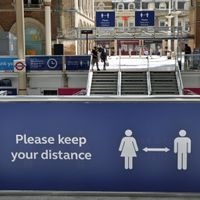