ABOVE: An olive sea snake swimming toward an underwater photographer's camera
JACK BREEDON

Olive sea snakes (Aipysurus laevis) are notorious for approaching divers. The animals have been known to swim right up to an unexpecting person and lick them, and they’ve even pursued people who’ve attempted to flee—behaviors markedly different from those of their land-based kin. Marine ecologist Tim Lynch and his colleagues may have figured out why: based on data from Lynch’s firsthand experience with sea snake encounters, the researchers concluded that the animals simply get confused and mistake divers for fellow sea snakes or other marine life.

The discovery began in the early ’90s, when Lynch, now a research scientist with the Commonwealth Scientific and Industrial Research Organisation (CSIRO) in Australia, was working on his doctorate. He had received money from the Lion’s Club of Townsville to study dangerous marine creatures, and at first he thought he’d study cone snails, infamous mollusks armed with potent venoms that can kill an adult human. But he couldn’t find any snails. So at the urging of his advisor, he switched to studying the behavioral ecology of sea snakes, whose venoms are notoriously potent. Specifically, the researchers wanted to know whether the six-fold difference in size between male and female olive sea snakes—males weigh just 0.5 kg while females weigh about 3 kg—correlated with sex differences in habitat or behavior. It seemed to, but as often happens with theses, the data didn’t end up getting published in a peer-reviewed journal.

More than 25 years later—at the urging of a professor who assessed his PhD, Macquarie University’s Rick Shine—Lynch dusted off his binders of data to ask a different question: Why are olive sea snakes so diver-friendly? Indeed, as he dove with the animals for his graduate work, he recorded dozens of instances where the animals actively approached him and even licked him before swimming away.  The analysis, published today (August 19) in Scientific Reports, suggest the majority of cases involve lustful male sea snakes unaware that divers aren’t extra-large females. “We were gonna call it Dangerous Liaisons, but they wouldn’t let us,” Lynch says.

The Scientist spoke with Lynch about the research and the experience of working with these animals.

The Scientist: This new paper is based on your observations of these snakes from the mid-’90s. And during that research, the snakes approached you on what turned out to be a number of occasions. What was that like?

Tim Lynch: They’re very different from land snakes. You and I have a long evolutionary history with land snakes. We’ve been knocking each other on the heads since Adam and Eve, perhaps even longer. The sea snake has no evolutionary history with humans. . . . So they don’t see us as a threat. The interaction—once you understand that—can be quite benign.

So, me—understanding that the sea snake did not see me as a threat, as, say, a Taipan would or a tiger snake would—I just realized that if I kept still, the snake would come over, lick me and go ‘Oh, you’re not a sea snake,’ and then go off and do its own thing. And I’m not phobic to snakes, so that was fine.

TS: What was the impetus to take another look at the data now?

TL: Rick Shine, [an evolutionary ecologist] . . . got back in touch with me, and he said: ‘Listen, why didn’t you ever publish this stuff? I’m sick of having to cite your thesis, which is not available outside of the JCU [James Cook University] library. You should publish it.’

I went out to the back shed and cracked open the old filing cabinet and pulled out all the data, which are in binders from 25 years ago . . . and rebuilt the datasets and did the analysis. And we wrote the paper. So, it’s something of a [COVID-19] lockdown project.

TS: And what did you conclude from those analyses?

TL: Well, when I did the PhD . . . I was looking at their behavior, and also their habitat and niche diversions, and there was quite a lot of diversions occurring between the two sexes. But I soon found out, from just eyeballing the data and also experiencing it because I was at collecting it, that the males approached [me] all the time. All the time. 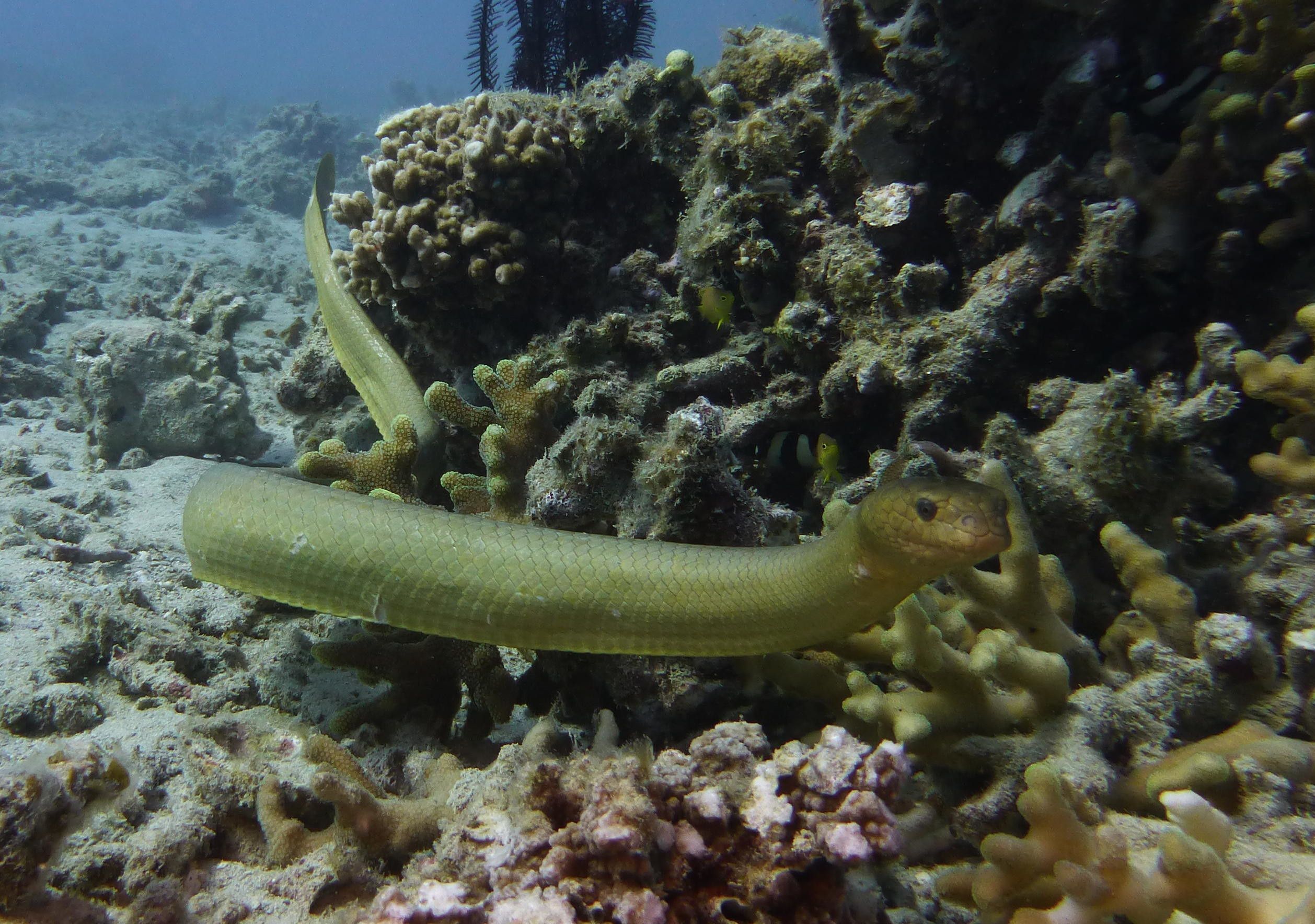 The females would approach and say, ‘Hello, what are you?’ and then just get back to doing their particular behaviors, whereas the males would make these repeated approaches—forgetting that you were there, seeing you again, and approaching you again.

We did some analyses, and there was a whole heap of significant results showing that the males approached more and cumulatively spent more time with [me], and also licked [me] a lot more often than the female snakes.

TS: And those were the findings that really suggested to you that these so-called attacks, or approaches, are actually cases of mistaken identity?

TL: Yeah, that’s what we think is going on. The snakes don’t have the best eyesight. They’ve got reasonable eyesight, but to really work out what you are, they need to taste you. They have this organ in the roof of their mouths—they lick things, and then they press [their tongues] up against that organ to work out what things are.

If you look at the orientation of divers and their length, and where they are on the reef, they kind of look like super females. . . . We’re a lot bigger than three kilograms, but for a male sea snake, you’d look like the fifty-foot woman. ‘Wow, look at her! She’s fantastic! I’m going to be able to make so many babies with this enormous sea snake!’ And then . . . because you’re kind of the same length and depth ratio as sea snake, it comes over to you. And then it licks you. . . then the male snake will get slightly disappointed and disappear. And then five minutes later, it’ll forget and see you again, and come racing over again, and lick you again, and get disappointed and disappear. 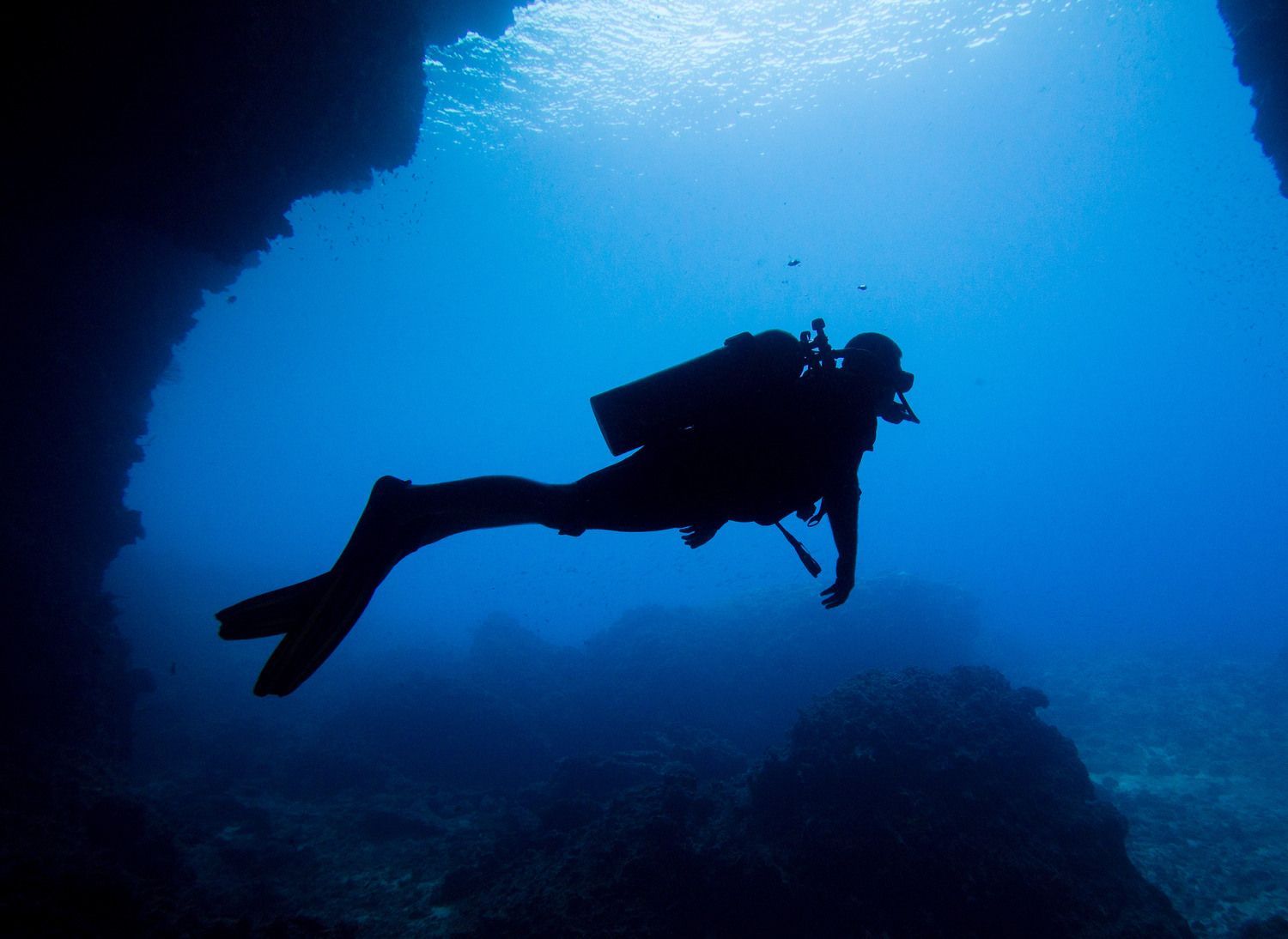 Lynch says the long profile of a scuba diver might contribute to the snakes' confusion.
© ISTOCK.COM, MAGNUS LARSSON

The other thing that we thought of . . . [is that] the females, when they’re approached by males, flee from them. We think that this is a courtship behavior—a fitness test, if you may. The females will try to get away from the males, the males chase them, then [if they catch them], they’ve won that particular round of courtship. So, if you try to swim away from a male snake, you’re probably replicating their courtship display, and they’re not going to give up. [This may explain the reports of chasing divers.] We also found that they would sometimes coil around legs and arms, and this is the behavior that the males do around the females when they’re attempting to mate with them.

TL: It doesn’t happen with all [sea snakes]. Because the family’s so diverse, some of them are quite specialized. Olive sea snakes are generalists, so it happens with them, and it probably happens with a few other species as well. Also, olives tend to be quite widely distributed, and they’re one of the larger, more dangerous members of the family [in terms of toxicity].

TS: Given your findings, what is likely the best way for a person to avoid being bitten if a snake does approach them underwater?

TL: I suggest that you gently, if possible, settle on to the bottom, just let the snake lick you, and keep still. That’s always pretty good advice with dangerous snakes, usually: just to keep still. For sea snakes, they’re probably less dangerous than land snakes if you don’t try to grab them. We don’t have this evolutionary history with them, so they just need to come over and identify what you are, and then they tend to leave.

The snakes don’t have the best eyesight. They’ve got reasonable eyesight, but to really work out what you are, they need to taste you.

Now, if you try to grab them, or you kneel on them, then they’ll bite you. So it’s important not to upset them.

TS: And if a person is bitten, how bad is it?

TL: The Hydrophiinae, which are the true sea snakes—they’re very closely related to the Elapidae, which are the dangerous land snakes, things like taipans and tiger snakes and cobras. So, the venom of the olive sea snake is fairly similar. It used to be considered the fourth most toxic snake, so it’s [capable of] killing elephants. . . . If you’re bit on the arm, you keep it still and you get to a hospital as quickly as you can.

TS: Is there anything else you think people should know about these animals?