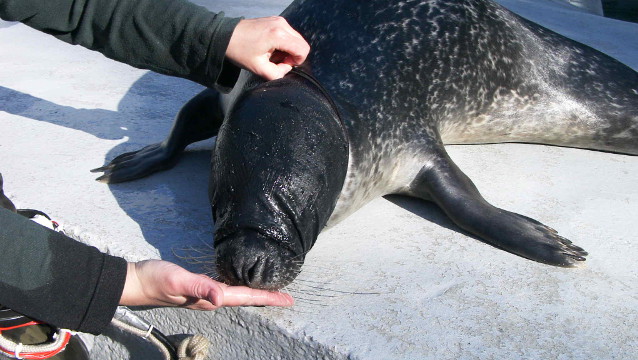 A harbor seal dons a blindfold to take part in an experiment COURTESY OF MARINE SCIENCE CENTER ROSTOCKSeals are expert predators, making use of mechanosensory whiskers on their faces to track the movements of swimming fish over large distances. Now, researchers at the University of Rostock, Germany, have shown that these whiskers could allow seals to detect weak water currents made by the breath of stationary fish, potentially explaining how some seals can catch well-camouflaged, bottom-dwelling prey even in murky or dark water. The findings were published today (January 18) in The Journal of Experimental Biology.

“It’s a pretty exciting paper,” said Colleen Reichmuth, head of the pinniped cognition and sensory systems laboratory at the University of California, Santa Cruz, who was not involved in the work. “These animals are extremely sensitive to information in the environment coming in from many different sensory channels. . . ....

The Rostock team had previously reported that harbor seals can use their whiskers to follow the wakes of fish swimming hundreds of meters away. But those findings didn’t explain how seals could locate benthic prey like flatfish—known to make up part of harbor seals’ diets—which spend much of their time motionless on the seafloor.

One possible explanation was that seals, like walruses, brush the ground with their whiskers, discovering food as it moves beneath them. But when the researchers brought flatfish into the lab for closer study, they came up with another idea. “We visualized the water movements around [these fish],” coauthor Wolf Hanke told The Scientist. “We saw currents emerging from the gills as the fish breathed.”

Suspecting that these currents might constitute a detectable stimulus, the researchers constructed an experimental setup consisting of eight nozzles distributed around a two-meter by four-meter platform; each nozzle—covered by mesh to prevent direct contact with seals—could be individually activated to produce a weak water current that mimicked a stationary flatfish exhaling at around 25 centimeters per second.

The team suspended this platform one meter underwater in a seal enclosure in the Baltic Sea, and independently trained three, research-experienced harbor seals to swim over it and search for a single active nozzle, the location of which was randomly switched between trials. After detecting and hovering over the correct nozzle for more than five seconds, the seal was rewarded with a snack.

Several hundred trials per animal later, the researchers concluded that all three seals could easily locate a nozzle emitting a constant weak current, regardless of the direction from which the animals approached it. Detection rates were broadly similar when the nozzle flow was modified to produce a more breath-like, pulsed signal, indicating that harbor seals would be more than capable of detecting flatfish from these currents alone.

The team also found that blindfolding the seals had only a marginally negative effect on the predators’ performances. However, when the animals’ whiskers were also covered, detection rates dropped to zero (in most cases, the seals drifted at the surface without attempting to locate the active nozzle at all). These controls “worked as we’d hoped,” explained Hanke. “It’s a strong hint that the whiskers are crucial.” 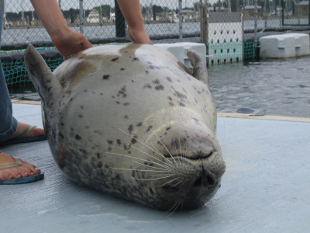 Paul Nachtigall, director of the marine mammal research program at the Hawaii Institute of Marine Biology, called the work “a really good step forward” for understanding seal behavior. Although the researchers did not directly observe seals using breathing currents to detect prey, “the setup lets them show what’s possible,” he added. “I’m sure that at some point in time, somebody will demonstrate that in fact [seals] do use this technique for finding bottom fish.”

The authors noted in their paper that the findings might also offer an explanation for a mysterious behavior in some fish species: the suppression of breathing when disturbed. Such behavior “doesn’t make any sense,” said Hanke—unless, perhaps, it eliminates signals that give a fish away to its predators. “It’s a fascinating idea,” said Nachtigall. However, he added that breathing suppression is seen in various species, and it’s unclear whether the response could be explained entirely by predation avoidance.

One detail left unaddressed in the present study is how small a current harbor seals can detect. “It’d be interesting to take it down a notch,” said Emily Standen, an evolutionary biomechanist at the University of Ottawa, Canada. “How sensitive are these guys? And how do they distinguish this signal from background noise?” Addressing these questions is on the agenda, Hanke noted, adding that the team is now designing a setup with finer control of the movement of seawater around the nozzles. “We’d like to be able to control the background flow,” he said. “That’s being planned now.”

In addition, Reichmuth said she hopes to see the methodology extended to study the sensory ecology of other marine predators. “It’s a nifty experimental paradigm,” she said. “[It] could be used to answer related questions about what seals can do, but also interesting and fundamental questions about what other species of aquatic animals can do.”