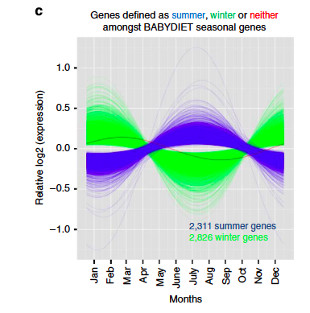 NATURE COMMUNICATIONS, CASTRO DOPICO ET AL.Gene expression in human immune cells varies by season, according to a study published today (May 12) in Nature Communications—the first of its kind to examine patterns in gene-expression variation throughout the year.

The results indicate “sort of a molecular signature of the seasons in humans,” said Ghislain Breton, who studies circadian rhythms at the University of Texas at Houston, but was not involved in the work.

In immune cells of the blood, the expression of genes that promote inflammation tends to rise in the winter and dip in the summer, the team—led by investigators at the University of Cambridge—found. The researchers hypothesized that these and other seasonal gene-expression patterns may help explain the seasonality of diseases, from infectious maladies like the flu to chronic conditions such as heart disease.

“We now know that all immune cell types have their...

Cambridge’s Xaquin Castro Dopico, who earned his PhD in the lab of John Todd, was inspired to initiate this analysis after reading how expression of a repressor of inflammation in mice, ARNTL, varies throughout the day. At the time, the Todd lab was also collaborating with researchers in Germany on an ongoing study, called BABYDIET, examining the effects of a gluten-free diet during the first year of life on children’s development and risk of Type 1 diabetes. BABYDIET requires regular collection of blood from participants over many years. So Castro Dopico used the data to ask “a different question,” Todd recalled. “He said, ‘I’ll take this unique clinical dataset that we’ve generated and I’ll ask the question: ‘Does gene expression change not within a day but across the seasons?’”

The team began by examining ARNTL expression in the BABYDIET cohort, finding that it had a strong seasonality, with levels rising in the summer and dropping in the winter. The researchers also looked at other clock genes and found that many of them (nine of 16) showed seasonal expression patterns.

The researchers looked beyond clock genes, too. From the BABYDIET dataset, they found that 23 percent of all genes examined varied with the seasons.

Grouping the seasonal genes from the BABYDIET cohort into categories, the researchers found that overall, pro-inflammatory gene expression rose in the winter and fell in the summer, following the same general expression pattern as ARNTL.

Next, the researchers turned to publicly available data from two additional studies, on diabetes and asthma, the latter a multi-center study involving participants across several countries. They found that the patterns of summer and winter gene expression observed in the BABYDIET cohort were reversed in the dataset from an Australian asthmatic cohort, indicating that the seasonal trends were consistent even across hemispheres. In an asthmatic cohort from Iceland, which undergoes periods of 24-hour sunlight, seasonal patterns were irregular.

Using genetic markers of each cell type, the team found that levels of individual blood cell types in the BABYDIET cohort seemed to vary by season. Examining the composition of blood donated to Cambridge Bioresource for research throughout the year confirmed that the makeup did vary seasonally.  In a population from The Gambia, a Western African country just north of the equator, the researchers examined patterns of cellular blood composition using data gathered through the Keneba Biobank, finding that the blood’s cellular makeup was tied to the rainy season. The researchers hypothesized that these seasonal changes in the cellular composition of blood are the major drivers of the seasonal variation in gene expression.

An outstanding question is whether expression levels of pro-inflammatory genes rise in the winter as an offensive measure against pathogens or as a response to heightened pathogen exposure.“That’s the ‘chicken and egg’ argument,” said Todd.

Knowledge of seasonal gene expression could potentially help researchers better understand and treat seasonal diseases. For example, it is known that death from cardiovascular disease is more likely in the winter when, according to this research, expression of pro-inflammatory genes is high.

“Our observations help explain why some chronic diseases are seasonal in that our immune systems are heightened to be pro-inflammatory so that when we have a cardiovascular disease, we’re more prone to developing the pathology that might lead to cardiovascular death,” said Todd. “In parallel, I’m sure that the greater infectious disease burden that we suffer is also a contributing factor to the changes that we’ve seen. I think it’s both.”

Cermakian said it is too soon to consider the clinical utility of these findings. “What is sure,” he noted, “is that timing information, circadian but also possibly seasonal/annual, will need to be taken into account more and more in the future, with the aim of providing the most adequate treatment to patients. The response to a treatment might be very different at one time of the year or six months later.”