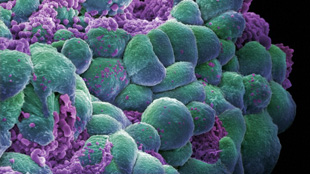 Breast cancers may become resistant to standard hormone therapy because the estrogen receptor becomes reprogrammed to bind to different spots in the genome, according to a study publishing today (January 4) in Nature. The findings could provide clues for developing therapies to overcome resistance or diagnostics that could predict which patients are more likely to be resistant to hormone therapy.

Roughly three-quarters of breast cancers require an estrogen receptor to grow. The receptor is usually free-floating in the cytoplasm until it is bound by estrogen,...

Many breast cancers, however, become resistant to the therapy, and grow despite regular treatments. In the past few years, Carroll and colleagues have shown in cell lines derived from metastatic cancers that resistant cancers bind to different genes than non-resistant forms.

But the question remains, how do the resistant cancers redirect the drug-bound estrogen receptors? One possibility is a protein called FOXA1, which has been shown in vitro to open DNA chromatin and initiate binding to the DNA. Indeed, the researchers found that levels of FOXA1 were enriched near the binding sites, and was also present in 95 percent of metastatic cancer samples that they tested. The researchers speculate that resistant cancers contain an altered FOXA1 protein that helps redirect the estrogen receptor to different sites in the genome, conferring resistance to hormone therapy.

It's hard to say, however, whether FOXA1 is the master architect of the switch to resistance, or whether it is simply following the lead of some other protein, said Rachel Schiff, a cancer biologist at Baylor College of Medicine in Houston, who was not involved in the study.  To prove that, the researchers would need to show that removing FOXA1 from the mix could prevent the switch to resistance, she said.

If FOXA1 is the guilty party, however, targeting the protein with drugs early on in breast cancer therapy may one day help prevent resistance, said Vincent Giguere of McGill University, who wrote a Nature News and Views piece about the paper. “If you can stop the reprogramming early, then the tumor will not go from a good outcome to a bad outcome.” If the findings can be validated in a larger cohort of tumor samples, he added, researchers could also use estrogen receptor binding patterns to predict outcome in patients.

This article has been corrected to reflect that tamoxifen is not an aromatase inhibitor and that hormone therapy is not injected. The Scientist regrets the error.