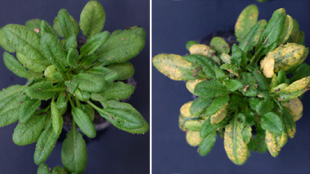 The Arabidopsis plant on the left received a priming treatment before infection with bacteria and shows no sign of disease. The plant on the right is an untreated control plant. BRIGITTE MAUCH-MANI

After plants acquire resistance to pests and pathogens, their offspring shoot up through the soil with better defenses.  The findings, published in a recent series of papers in Plant Physiology, are the first to identify small interfering RNAs (siRNAs) as a possible mechanism of this inherited memory response, and suggest a new strategy for managing crop pests.

“It’s sort of like giving a vaccine to the parent and seeing immunity in the child,” said Andrei Alyokhin, who studies insect-plant interactions at the University of Maine and was not involved in the research. “It could help with the pest problem—induced resistance in plants is an extremely underutilized approach.”

Plants eventually come to know their enemies.  When a caterpillar...

This is why George Jander of the Boyce Thompson Institute for Plant Research in Ithaca, New York, and his colleagues intentionally expose their tomato plants to caterpillars. “The priming increases resistance, and we are now seeing inheritance in the next generation,” he said.

Jander and his colleagues placed a corn earworm on each of nearly one hundred tomato seedlings.  The researchers similarly exposed Arabidopsis weeds to white cabbage butterfly larvae.  They then planted a second generation of plants in a pest-free environment, and introduced the insects after several weeks. Sure enough, offspring of plants exposed to the pests sustained less leaf damaged, and the caterpillars grew to only 30 to 50 percent the size of the insects that plagued parent plants.  In Arabidopsis, this priming was even passed on to a third generation: the grandchildren of infested plants showed heightened resistance, even when their parents had not been exposed.

And the approach may be applicable to a wide range of pest species.  For example, after infesting parent plants with the diamond back moth, Jander found the white cabbage butterfly and beet armyworm were smaller and less abundant on progeny plants. Strangely, however, the diamond back moth devoured leaves as usual, raising the question of just how specific these defense responses are.

“I suspect there is specificity—it may be that plants distinguish between herbivores—but we don’t really know how these interactions work,” said Sergio Rasmann, a biologist at the University of Lausanne in Switzerland who collaborates with Jander. It could also be that the plants “turn on the same defense irrespective of what’s feeding on them,” said Jander.

Taking a closer look at the mechanisms of inheritance, Rasmann first turned to small interfering RNAs (siRNAs)—a class of molecules so small they can potentially diffuse through the plant from the leaves to a developing seed. When he grew mutants that lacked siRNAs, the second generation plants showed no sign of an inherited defense response.  “It seems you can’t prime the seeds without the siRNAs,” said Rasmann.

The findings are the first to demonstrate a role for siRNAs in next generation priming, wrote Ian Baldwin, of the Max Planck Institute in Jena, Germany, who was not involved in the research, in an email to The Scientist. But exactly how they work is unclear. “The actual siRNAs that are transmitted to the seeds, and their targets, still need to be identified.”

Jander questions whether the siRNAs serve as the vehicle of inheritance.  “[They could] also move to the seed and catalyze DNA methylation,” he said.  Indeed, after infesting Arabidopsis plants with virulent Pseudomonas syringae bacteria, researchers at the University of Sheffield found evidence for the combined regulation of methylation and histone modification.

The findings suggest a new way that farmers might protect future generations of crops—collect seeds from infested plants to grow stronger plants the following year.  “Farmers probably won’t want to rely on this alone, but when [next-generation priming] is incorporated into organic farming as one of many methods, it can help,” said Jander.

Seed farms might even employ benign bacteria, according to results published by Brigitte Mauch-Mani at the University of Neushâtel in Switzerland.  When the team exposed plants to a transformed strain of Pseudomonas syringae that triggered defenses but not disease, offspring were still more resistant to the virulent bacteria.

Although for industrial-scale applications, it might be easiest to use low-toxic chemicals to trigger the molecular defenses instigated by bacteria and herbivores, Jander said. He recently sprayed plants never exposed to caterpillars with the hormone methyl jasmonate, and found offspring were more resistant to disease than control groups. If chemical technology can be perfected, it might help researchers amplify the inherited defense response.

“The idea is very new, and there is a lot of work to be done,” Rasmann said.  “But if we can harness the next generation response, it might reduce the overwhelming loads of pesticides applied crop fields now days.”