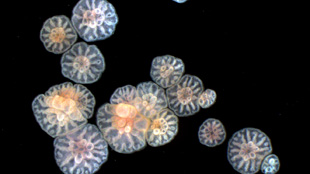 Coral embryos drifting in rough ocean waves are essentially naked, with no protective membrane to keep them from breaking apart in the turbulence. The individual cells fragmented from the embryo are able to develop into new coral embryos and into adulthood in the lab, smaller in size but viable, according to research published today in Science.

“It’s a good paper, establishing a new way that corals can increase their numbers asexually,” said coral reef biologist Peter Glynn from the University of Miami, who did not take part in the research. “If they can demonstrate this in nature, it would be really unique and exciting.”

Ocean scientists Andrew Negri and Andrew Heyward from the Australian Institute of Marine Science have been handling young corals for years, and “have always...

Negri and Heyward simulated the experience of turbulence generated by small white caps in the lab by pouring embryos floating in seawater from a height of 30 centimeters. Nearly half of the embryos fragmented—but they didn’t stop developing. Individual cells or broken clumps reorganized and continued to develop into embryos, albeit smaller ones, and then “develop[ed] normally into larvae and [went] on to attach to surfaces and metamorphose into small polyp clones,” said Negri.

Iliana Baums, who studies coral population genetics and evolution at Pennsylvania State University and was not involved in the research, regularly collects coral larvae from the field, and in her samples she “sees those little larvae and I’ve always wondered if those actually survive,” she said. “It’s quite astonishing that these coral embryos can keep developing.”

Coral reefs are under threat from ocean warming, pollution, and acidification, and the findings could help researchers better understand how to preserve them. The ability to generate clones in rough waters would to mean that “the corals could increase their fecundity,” said Flynn. “Instead of spawning a million eggs, if they break up they could be spawning 2 million or 4 million.”

However, the strategy also has its drawbacks. Corals are hermaphroditic, producing both eggs and sperm, but they cannot sexually reproduce with a genetic match. If these clones are all settling near each other, they will not necessarily be able to successfully mate. “You can find thickets of corals growing and think, ‘Oh, I have 100 colonies,’ but it turns out that they’re all genetically identical,” said Baums. “It’s a real problem for these corals.”

But just knowing that this process occurs could help with restoring coral reefs. Researchers often raise polyps in the lab to repopulate abandoned reefs. The fragile developing embryos must be handled carefully to “make sure you make diverse populations when you’re replanting,” she added.

Before this new form of reproduction-by-cloning is integrated into management plans, more research needs to be done in the field to ensure that the resulting larvae are able to develop into viable polyps and then settle into coral colonies in the wild. “The smaller ones may not compete as well with algae and other competitors on the reef,” noted Flynn. “It would be great to try and get a handle on this in the field.”