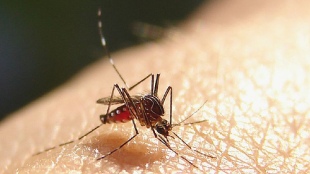 Mice infected with the malaria parasite can purposely damage their own healthy red blood cells to defend themselves against the invader, which thrives by infecting new blood cells. This phenomenon, once thought to be an unintended side effect of the immune system response to infection, appears instead to be an effective measure the reduce the virulence of the parasite, according to a study published yesterday (June 20) in Journal of the Royal Society Interface.

“The immune system is really judiciously killing red blood cells at exactly the moment where it will maximally slow down the parasite’s growth rate,” said evolutionary ecologist and co-author Jessica Metcalf of Oxford University. “So it’s self-harm for self-defense.”

Malaria parasites multiply within red blood cells until they burst, releasing new parasites to seek out new cells and propagate the infection. This cycle tends to happen in waves, so that at...

To tease apart the host-pathogen relationship, Metcalf compared the number of infected and uninfected red blood cells at various time points for 20 days in mice. She then estimated the average number of newly infected cells per previously infected cell, and correlates that measure, called the reproduction ratio, with other factors, such as disease symptoms, the available supply of healthy red blood cells, and the effectiveness of the host immune response.

Of the eight malaria clones the team tested, the most virulent were also more transmissible, confirming a long-time assumption of parasite dynamics: the more destructive a parasite is to its host, the more quickly it will have to find another, or face extinction. However, the researchers found that the timing and magnitude of transmission of the parasite could not always be predicted based on virulence alone, indicating that the parasites were using different tactics to acquire resources, evade the immune system, and spread to new host cells.

“The idea is that each of these strains differ in the harm they cause,” theoretical biologist Samuel Alizon of the Institut de Recherche pour le Développement in France, who was not involved in the work,  said by email.

One factor that could play a role is the dominant age of red blood cells. As an infection persists and the older blood cells are killed by parasites, the overall population of blood cells becomes much younger. In previous studies, different clones have shown preference for infecting either old or new cells, in which case different strains of the parasite should be favored at different points in the disease progression. But what kind of immune response a clone elicits, including the self-killing mechanism that the team discovered, is also likely to be key in influencing parasite transmission, Metcalf noted. By sacrificing their own red blood cells, the mice can limit the parasite’s ability to spread, and ultimately save more bloods cells in the long run.

The apparent “guerilla action” of the immune system in killing uninfected red blood cells gives new insight into how natural variations in immunity may work. For once, an overactive immune system may be a good thing, helping to control the spread of infection within the body. While Metcalf says there is still a lot unknown about the complex interactions, the research suggests another way in which immunity works to stop invading pathogens in their tracks.

Malaria in mice is much more aggressive and acute than in people, however, so the application of the findings to the human disease remains unclear. But Metcalf believes that the knowledge that parasite virulence stems from a variety of mechanisms could impact the development of new treatments. “If you know that the parasites are doing very different things, then that tells you something about…[the] different impacts of different treatments.”