ABOVE: A five-day-old gastruloid
DAVID TURNER

Clumps of embryonic stem cells given one brief molecular stimulation start arranging themselves in a way that resembles a mouse embryo, down to the timing of when the cells switch on particular developmental genes, according to a report in Nature today (October 3). The reproducible formation of these so-called gastruloids could make them a potentially valuable resource for research and reduce the number of animals used in experimentation.

“This is a fascinating study,” developmental biologist James Briscoe of the Frances Crick Institute in the UK writes in an email to The Scientist. “The ability of ES [embryonic stem] cells, when properly shepherded, to specify all three major body axes is striking and is yet another example of the surprising ability of developing tissues to self-organize.”

ES cells are derived from a group of cells within the early mammalian embryo called the inner cell mass. During embryogenesis, the inner cell mass gives rise to the entire body of the organism and, when cultured, ES cells can be differentiated “into all the different cell types of the organism,” says Alfonso Martinez Arias, a geneticist at the University of Cambridge in the UK and an author of the paper. However, “they don’t form an organism.”

To understand how the inner cell mass becomes an organism, Martinez Arias and colleagues have been attempting to recreate the early steps of embryogenesis with cultured ES cells. Their latest effort, described today, has resulted in structures with similarity to gastrula-stage embryos—the period in development where distinct cell types begin to develop and the body’s axes are laid out.

In these gastruloid structures, “early axis specification and 3D pattering of the embryonic tissues is now quite well recapitulated,” says Niels Geijsen of the Hubrecht Institute in the Netherlands who was not involved in the research.

To make their gastruloids, Martinez Arias and colleagues take clusters of approximately 250 ES cells suspended in culture medium and briefly treat them with a molecule that activates Wnt signaling—a pathway known to be essential for body axis specification in the early embryo.

This one trigger is sufficient for the cell clumps to elongate and to establish patterns of gene expression along their anteroposterior (head-to-tail), dorsoventral (back-to-belly) and mesolateral (left-to-right) axes akin to those seen in mouse embryos of equivalent developmental age. The gastruloids do not recapitulate the most anterior (head) end of the embryo, which is known to require Wnt inhibition.

“When we compared the patterns of gene expression over time and space with [that of] embryos we found very large similarities,” Martinez Arias says.

In particular, “the molecular data for the Hox genes is pretty compelling,” says stem cell and developmental biologist Ayreh Warmflash of Rice University who was not part of the research team.

The Hox genes encode a large family of transcription factors that are activated by Wnt signaling and control the body plan of the embryo along the head-to-tail axis with each family member being expressed at defined zones along that length. Remarkably, this ordered expression was evident in the gastruloids.

It’s as if Picasso decided to become an embryologist.

“That’s quite amazing,” says Geijsen. “It seems that any external cues”—such as those received from implantation in the uterus—“don’t play a major role at all in the whole patterning process.” Instead, he continues, “the embryonic cells are all you need to set up the entire body plan.”

While gene expression in the gastruloids mimics that of the embryo, the architecture of the tissues does not. Instead of defined morphological boundaries between tissue types, “it’s as if Picasso decided to become an embryologist,” writes Briscoe.

Martinez Arias agrees. “We look at the cells that underlie this beautiful transcriptional landscape . . . and they are highly disorganized,” he says. “There is this disconnect.”

The gastruloid’s imperfection, as far as reproducing a real mouse, could actually be a benefit, argues Warmflash. “You want it to be realistic enough that it’s telling you something about the embryo, but if you were perfectly recreating the embryo, then you’re perfectly recreating all that complexity, and it becomes difficult to study. Sometimes there’s a utility in these reduced systems.” 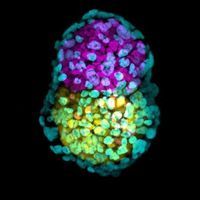 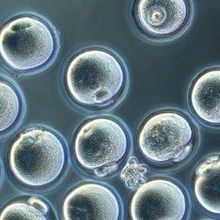