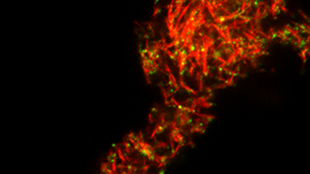 A protein found in semen makes HIV’s job of infecting immune cells easier, according to research published today in Cell Host & Microbe. The proteins, called semenogelins (SEMs), are abundant in semen and carry a positive charge that helps to bring the negatively-charged HIV virus and target immune cells together.

“The unique part of these studies is that they are actually identifying what can increase infection,” said Charu Kaushic, an immunologist at McMaster University who was not involved with the research. “Technically, it’s a very solid paper, but does this actually happen in the genital tract of women post-ejaculation? I’m not sure if it’s physiologically relevant.”

The research follows up on a 2007 study that identified a positively-charged seminal protein called SEVI (semen-derived enhancer of virus infection) that boosted HIV’s infectivity. Warner Greene, the director...

In the new study, Greene and his team cultured HIV with T-cells and saw higher rates of infection in the presence of fibril SEMs. Similarly, culturing HIV with normal semen and semen lacking SEMs, the researchers found that HIV infectivity correlated with SEM level.

The researchers theorized that, because both HIV and their target cells are negatively-charged, the “virus has to overcome that energy” to cause infection, Greene said. “These fibrils help to neutralize the negative charge and, like a glue, allow the virus to attach to the target cell with really high efficiency.”

The typical SEM peptide structure had no effect, however. Changes in infectivity were only seen with SEMs with the fibril structure, which are believed to only reconfigure during a brief window before the semen liquefies. Thus, some researchers doubt whether this HIV-enhancing activity occurs during normal sexual activity. “My concern is that, after ejaculation in the reproductive tract of women, the semen doesn’t stay coagulated and it liquefies very quickly,” said Kauschic. “Does it sit around long enough to form these fibrils?”

Additionally, virologist Davey Smith of the University of California, San Diego, would like to see studies done in pH environments the semen would experience naturally. Semen itself is slightly basic, but the vaginal tract has an acidic (low) pH. “All these studies are done at neutral pH, and HIV infectivity does not occur at neutral pH,” said Smith. “We always have to do some contrived things when we do in vitro work and it’s not the same thing that you would see in vivo in terms of transmission.”

Greene plans to go ahead with mammalian studies in rhesus macaques to get a better sense of how SEMs affect transmission in a more natural setting. And if he can find evidence, he has high hopes for application. “Blockers or disassemblers of these fibrils could be used as a component in microbicides” to protect against HIV, he said. The combination of combating HIV and its protein enhancers in semen could “produce a far more effective microbicide, and that’s very important for women,” he added.