Blood samples from thousands of elderly Icelanders show that certain sets of proteins with coordinated patterns of expression are associated with common complex conditions of aging, researchers report in Science today (August 2).

“This is an amazing paper, for its breadth and scope,” says Nicholas Morton, a specialist in metabolic disorders at the University of Edinburgh who was not involved in the project. “What they’ve been able to do is to use the power of a very deeply phenotyped population together with a comprehensive [serum] proteome analysis . . . to reveal protein networks that can predict metabolic disease and overall survival.”

Proteins and other molecules found in extracellular fluids and blood are mediators of inter-tissue and inter-organ communications and of body-wide homeostatic mechanisms. As a person ages, changes in these proteins and molecules are thought to lead to tissue and organ deterioration and the development of chronic diseases. Such age-related differences in blood have been exemplified by experiments in which the circulatory systems of young mice were connected to those of older mice and shown to rejuvenate the tissues and organs of the older animals.

It’s rare that changes in a single type of protein spur the development of chronic diseases of aging, such as coronary heart disease, atherosclerosis, dementia, and diabetes. Almost always, such diseases have complex etiologies, suggesting interacting networks of proteins, including those in the blood, are to blame, say study coauthors Valur Emilsson and Vilmundur Gudnason, both of the University of Iceland and the Icelandic Heart Association.

Detecting such interacting networks of proteins within the complex proteome of the blood requires enormous amounts of detailed data. Fortunately, Emilsson and Gudnason had access to medical information, biometric data, and blood samples of 5,457 Icelanders who were part of a Reykjavik-based aging study called Age, Gene/Environment Susceptibility (AGES). And, thanks to a collaboration with Novartis and Colorado-based proteomics company SomaLogic, the team was able to design a panel of DNA aptamers—short unique sequences that bind specific proteins—capable of recognizing and measuring 4,137 known and predicted serum proteins within the subject samples. Together, this enabled “the largest proteomic analysis of secreted proteins to date,” Emilsson says.

Serum samples from the subjects, who were aged 66 to 96 and who represented a cross-section of the elderly Icelandic population, were tested against the aptamer panel and the protein measurements were subsequently analyzed computationally to identify links between different proteins types and between the proteins and disease diagnoses of the subjects.

The team found 27 distinct networks, or modules, of proteins that showed consistently coordinated patterns of expression, or co-regulation, across the cohort of subjects. The modules varied in size from 20 to 921 proteins and were each made up of proteins from an assortment of organs and tissues. This was “surprising,” says Ludwig Aigner of the Paracelsus Medical University in Salzburg, Austria who was also not involved in the research, because it points to cross-tissue regulation of the individual protein modules. However, it also supports the commonly held view “that age-related diseases are very often systemic,” he adds.

Finding biomarkers of disease in the blood is a “holy grail” of biomedical research, says Jens Nielsen of Chalmers University of Technology in Göteborg, Sweden who was not involved in the work. “The strength here is that [the authors] measure many proteins,” rather than relying on individual factors, he says, which may offer more robust links to disease.

While the results will need to be validated in another cohort of subjects, this is “a milestone paper,” Nielsen notes, and “very impressive.” 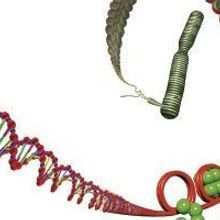