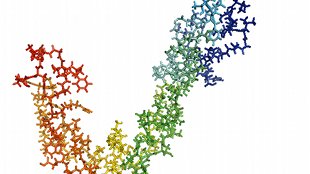 Notch1WIKIMEDIA, HANNES ROSTCellular signals transmitted via the protein Notch are critical for an array of developmental processes in animals. But, if poorly regulated, these signals can contribute to pathologies such as cancer. A report published in Science Signaling yesterday (March 24) reveals that part of the mechanism regulating Notch is the addition of methyl groups that boost the protein’s activity—and hasten its demise.

“While other post-translational modifications have been found in the Notch intracellular domain before, this is a new type of modification, and the biological effects are intriguing,” geneticist Urban Lendahl of the Karolinska Institute in Sweden, who was not involved in the work, wrote in an e-mail to The Scientist.

“[The modification] both leads to the degradation of Notch, but it is also very important for activation. It has an enigmatic role,” agreed geneticist Rhett Kovall of the University of Cincinnati, who also did not participate...

Notch proteins are a family of transmembrane receptors conserved across the animal kingdom that are essential for normal embryonic and postnatal development. Notch is also essential for ongoing differentiation processes in adults, such as the continuous formation of new cells. But too much Notch signaling can be detrimental, causing a variety of cancers in humans including T and B cell leukemias, as well as contributing to some autoimmune disorders, explained immunologist Barbara Osborne of the University of Massachusetts, Amherst, who did not take part in the study. “So a major focus for a lot of us is figuring out how we can modify Notch responses so that you don’t screw up the normal development-related effects, but you regulate the pathogenic aspects.”

Notch signaling is triggered when the protein’s extracellular domain binds to its ligand—expressed on a neighboring cell. In response to this interaction, the intracellular portion of Notch detaches and travels to the nucleus to activate transcription of target genes. Franz Oswald of the University of Ulm in Germany and his colleagues decided to investigate how this business-end of the protein is regulated.

Using biochemical techniques, including mass spectrometry, the team identified a methyltransferase called coactivator-associated arginine methyltransferase 1 (CARM1) as a direct interaction partner of the Notch intracellular domain. CARM1, as its name implies, adds methyl groups to the amino acid arginine; the team confirmed that five arginines in the Notch intracellular protein were indeed methylated by CARM1.

“We wanted to know what effect this methylation has,” said Oswald, “so we made mutations of all five arginines.” The resulting non-methylatable version of Notch turned out to be “much more stable” than the wild-type protein, which normally degrades very quickly, Oswald explained. Despite the mutant protein being considerably more resistant to degradation, however, its activity was reduced.

A mathematical model based on existing information on Notch degradation and gene-activation rates, as well as data from Oswald’s own experiments, suggested that methylation gives the wild-type protein “a very strong and short response . . . like a transcriptional flash,” said Oswald. Whereas with the non-methylatable, mutant protein, “you have lower activity, but it is prolonged.” These results could help explain how mutations to these methylatable residues, which are known to be present in some human cancer patients, affect the protein’s dynamics, Oswald said.

“Notch signaling is very context and tissue dependent,” Kovall said. For example, “most of the time Notch is an oncogene, but there are a number of cases where it is actually a tumor suppressor . . . it’s incredibly complex.”

Unraveling these complexities is critical, however, because “it adds to our toolkit of how we might consider regulating Notch signaling in pathogenic circumstances,” Osborne said.