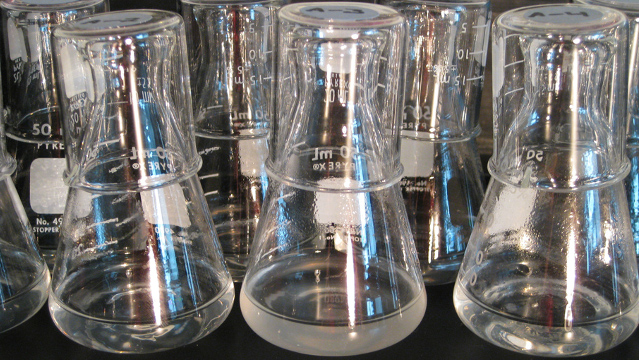 E. coli populations from the long-term evolution experiment (LTEE). The center population evolved the capacity to use citrate.WIKIMEDIA; BRIAN BAER, NEERJA HAJELASince 1988, Richard Lenski has been propagating the same 12 cultures of E. coli at Michigan State University, observing how they change over time. These cultures are grown on a low-glucose medium that includes citrate. Every day, members of the Lenski lab transfer the cultures to new media at a dilution of 1:100.

The team’s 2008 finding that some of the bacteria could use citrate as a carbon source under aerobic conditions was considered a game-changer—a potential example of how a new species could emerge (E. coli’s inability to metabolize citrate aerobically is one of its defining phenotypic features). Lenski and colleagues attributed the 15-year delay in the appearance of citrate-eating E. coli to the slow accumulation of “potentiating mutations,” genetic changes that provide no...

Now, the authors of a study published this month (February 1) in the Journal of Bacteriology suggest that the delay in the emergence of citrate-eating E. coli may not have been the result of historical contingency, but of experimental conditions that favored non-citrate-eaters. The University of Idaho’s Scott Minnich and colleagues have shown that when certain experimental conditions were altered, citrate-eating E. coli mutants (Cit+) appeared much more quickly and displayed similar genetic changes as those seen in bacteria from Lenski’s long-term evolution experiment (LTEE).

“We’re showing that there’s a simple genetic explanation for the acquisition of citrate mutants in the long-term evolution experiments—that there’s no historical contingency required,” Minnich told The Scientist.

Lenski and Michigan State postdoc Zachary Blount are questioning how Minnich and colleagues interpreted their data, however. Following The Scientist’s request for an interview, Lenski and Blount wrote in a post to Lenski’s blog that this latest analysis is an attempt to “undermine the LTEE as an exemplar of evolution,” alleging an “ulterior, nonscientific motive” behind the work.

Minnich, a fellow of the Seattle-based nonprofit Discovery Institute, is a proponent of intelligent design, the theory that “certain features of the universe and of living things are best explained by an intelligent cause, not an undirected process such as natural selection,” according to the organization’s website. He told The Scientist his personal beliefs played no role in the research. “I am not questioning anyone’s religious or philosophical positions in this paper,” he wrote in an email. “[My world view] is irrelevant.”

While the teams’ explanations of their observations differ, their data largely agree.

Wild-type E. coli cannot metabolize citrate in the presence of oxygen. The E. coli genome includes a citrate transporter (which takes in citrate and exports another molecule, succinate), but the gene encoding the transporter, citT, is normally only expressed in anaerobic conditions. In the Cit+ mutants, Lenski and Minnich’s teams found, citT was fused to another promoter (one that’s normally active in aerobic conditions), which allowed the bacteria to import this alternative energy source. Such an acquisition is called “promoter capture.”

Lenski and colleagues have proposed that the Cit+ mutants evolve through a three-step process: potentiation, actualization (promoter capture), and refinement (the addition of other mutations that improve citrate metabolism). In experiments in which they “replayed” evolution—by repeating the experiment with samples frozen at different time points—the researchers found that cells evolved the Cit+ phenotype from later generations, but not earlier ones, supporting the idea of historical contingency.

Suspecting that the rarity of the Cit+ phenotype might have been due to experimental conditions that could stall Cit+ evolution, Minnich and colleagues designed a study to test how long it would take Cit+ mutants to emerge under different conditions.

Minnich and colleagues grew the LTEE E. coli strain  (REL606) in the same glucose- and citrate-containing medium used in the LTEE, but allowed the bacteria to grow for a week before passaging. Under this condition, the team found, Cit+ mutants appeared much faster: as early as 63 days. In a separate experiment, the researchers grew several E. coli strains (excluding REL606) in a medium in which citrate was the only carbon source, to select for citrate-eating bacteria. Cit+ mutants emerged in fewer than 40 days in all but one strain tested, the researchers reported.

“What the new experiment has told us is [that] actually these phenotypes can evolve much more readily than we initially thought,” said Rees Kassen, who studies evolution using microbial systems at the University of Ottawa but was not involved in the research. “To me [this] suggests that if we’re going to make inferences about a species itself evolves over long periods of time, we have to be very careful about the ecology of how we do our experiments.”

Lenski and Blount concur. “We had already shown that if you put the bacteria on petri dishes where citrate was the only carbon source available and they were subject to prolonged starvation on it, we also could get . . . citrate mutants appearing on the order of a few weeks or so,” Lenski told The Scientist. “It’s already known [when mutants appear] depends on the ecological context.”

The Cit+ mutants Minnich’s team identified showed similar genetic features—expansion of citT, promoter capture, and activation of a transporter that returns succinate to the cell—as those observed in the LTEE, except that these citrate-eating bacteria lacked the potentiating mutations described by Lenski and colleagues, the researchers reported.

In their paper, Minnich and colleagues suggested that in the LTEE, the evolution of citrate metabolism was stalled at the very first step: replication of citT in the genome.

In the LTEE, the team wrote, E. coli feed on glucose in their media until it is depleted, every day. At that point, any bacteria that can metabolize citrate have a selective advantage. The researchers proposed that citT might be “leaky”—expressed at very low levels, even under aerobic conditions. In that case, bacteria with multiple copies of the leaky gene would continue growing using the citrate while the other, glucose-dependent E. coli stalled cell division. Following passage of the cells into fresh, glucose-containing media the next day, the citrate-eaters would lose their competitive edge. Further, the researchers wrote, maintaining extra genetic material might be a disadvantage for E. coli; some bacteria might jettison extra copies of citT. Were this cycle to be repeated daily, it could hold the evolutionary process up at the stage before promoter fusion could occur. Had the bacteria more time to feed on citrate before passaging, or were they grown on citrate alone, Cit+ mutants might have shown up earlier, the authors suggested.

“Thus the delay may not reflect the necessity of a nonselective potentiation event (the “historical contingency”), but rather be due to selective events with a low probability of serial transfer,” University of California, Davis, microbial geneticist John Roth and postdoc Sophie Maisnier-Patin who were not involved in the study wrote in an accompanying editorial.

Lenski and Blount dispute a model in which duplication of citT becomes advantageous and leads to promoter capture. And they have not found citT to be leaky, Blount told The Scientist, so E. coli containing multiple copies of the gene without promoter capture having a selective advantage does not compute. Further, in their experiments, the LTEE researchers have found that duplication of citT and promoter capture occur simultaneously, and together these events represent the actualization of the citT phenotype, said Blount. The editorial, in contrast, appears to suggest that citT expansion represents potentiation. “Van Hofwegen et al. and John Roth seem to have been a bit confused in their usage of our terminology,” said Blount. “And they were a little imprecise in how they used those terms of potentiation and actualization.”

The LTEE researchers applaud the experiments conducted by Minnich’s team. “The problem . . . is not with the experiments and data. Rather, the problem is that the results are wrapped in interpretations that are, in our view, unscientific and unbecoming,” Blount and Lenski wrote in their blog post.

“Cit+ mutants exemplify the adaptation capability of microorganisms but as of yet, the LTEE has not substantiated evolution in the broader sense by generation of new genetic information, i.e. a gene with a new function,” Minnich and colleagues wrote in their paper.

Rearrangement of existing genetic information that lead to novel phenotypes is an evolutionary process, the LTEE authors argue. “When natural selection—that is, differential survival and reproduction—favors bacteria whose genomes have mutations that enable them to grow on citrate, those mutations most certainly provide new and useful information to the bacteria,” Lenski and Blount countered in their blog post. “To say there’s no new genetic information when a new function has evolved (or even when an existing function has improved) is a red herring that is promulgated by the opponents of evolutionary science.”

Clarification (February 24): The sixth paragraph of this article has been updated to include a definition of intelligent design from the Discovery Institute’s website.