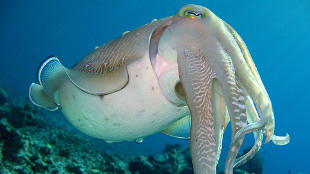 A diverse group of long-finned marine vertebrates and invertebrates that last shared a common ancestor 550 million years ago use the same fin motion to swim with maximal speed in a rare example of a mechanical explanation for convergent evolution, according to a study published today (April 28) in PLOS Biology.

Flatworms, cuttlefish, rays, and triggerfish are among the 1,000 species that belong to a group known as the median/paired fin swimmers. These animals move by rippling a fin that runs the length of their body. When researchers from Northwestern University measured the height of the ripples and the distance between them in videos of 22 unrelated species from three different phyla, they found that the undulations were consistently 20 times as long as they were tall in each animal. By mapping the species on an evolutionary tree, the scientists determined that the motion likely evolved independently...

To explain why flatworms and rays arrived at the same swimming stroke, a process known as convergent evolution, the scientists tested a variety of ripple length-to-height ratios in a computer model and with a robotic knifefish. In these systems, the researchers found that the 20-to-1 ratio provided the maximum amount of force to propel the animal forward. “We have quantified how an unusual group of swimming animals optimizes force and, therefore, speed,” study coauthor Malcolm MacIver said in a statement.

“Physics seems to have overwhelmed chance in the evolution of these creatures,” study coauthor Neelesh Patankar told The Washington Post. The researchers plan to investigate if other median/paired fin swimmers also use the same ratio to study how physical constraints might influence convergent evolution.